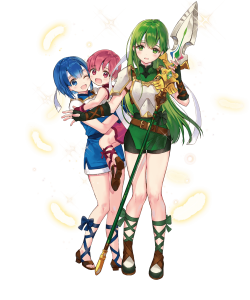 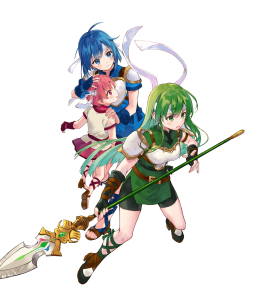 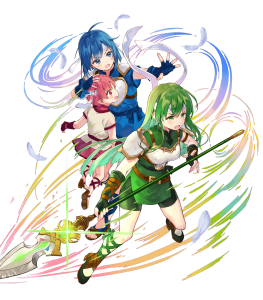 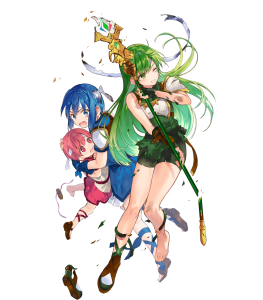 Any Asset/Flaw combination that does not affect the Whitewings' Attack negatively will suffice, as that is their most important stat.

Passive B: Wings of Mercy / Hit and Run / Escape Route

The Whitewings are the first of their kind to receive a Duo Skill that self-refreshes (at the start of odd turns). Unlike the others, they are not limited to using the skill once in a single battle, nor are they reliant on Duo's Indulgence to use it yet again in Aether Raids.

Even better, the Duo Skill effect itself is very strong; the sisters can give themselves and other flying allies an additional movement space, thus expanding their dominance at a larger range in key moments.

The Whitedown Spear is also a source of much of the sisters' sheer, impressive player phase strength. It grants a number of near-overbearing benefits simply by using them with at least two other flier allies—at which point you can simply run a very effective flier team. In short, the Spear weakens anything that the sisters choose the initiate on, grants the sisters an automatic follow-up attack, and—if their flier allies happen to be nearby (which is a common formation on flier teams anyway)—can attack twice per strike (resulting in quad hits!).

Whitedown Spear would not be nearly as threatening without a strong Attack stat accompanying it, but the Whitewings provides that in spades and more through their base 39 Attack (which conveniently also has a superasset!).

As fliers, the Whitewings can traverse over a number of obstacles such as forests and lakes, allowing for great movement and attacking options. Furthermore, since both their Duo skill and weapon reward the use of multiple flier allies, these same allies can provide and benefit from skills exclusive to their movement class, especially Hone Fliers, Goad Fliers, and Flier Guidance.

Much like their 3-4 star versions, this version of the Whitewings is exceptional at initiating combat, but honestly little else. Their stats outside of Attack are considered basic, and considering Whitedown Spear's benefits working only in one phase, there's little reason to deviate from their role as a nuke. Their enemy phase ends up being pretty mediocre as a result, with decent defenses being downplayed by a mediocre base Speed. Additionally, Whitedown Spear's benefits activate only in flier-heavy teams, which may either be no big deal to some while being a heavy deployment issue to others.

As a flier, Palla and her sisters have limited skill access compared to other movement types—they cannot access slots that would otherwise be deadly and obvious on them, such as Special Spiral or Lull skills. They are also vulnerable to bonus damage from bows—a fact that is further compounded by them needing other flier allies to be functional.

At start of odd-numbered turns, if Duo Skill has already been used, unit can use Duo Skill again.