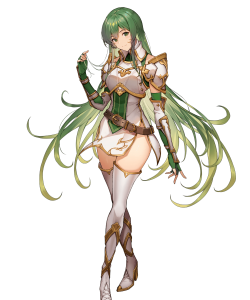 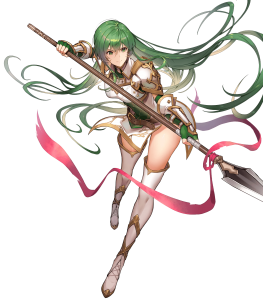 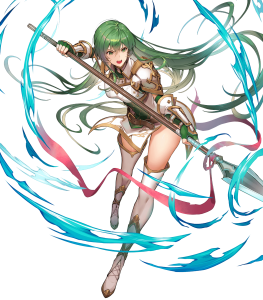 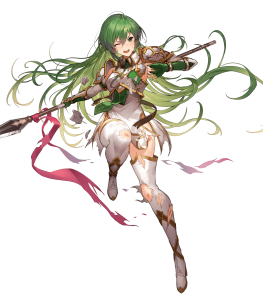 Passive B: Wings of Mercy / Hit and Run

The Earnest Knight’s exclusive Silesse Frost defines her playstyle through its exemplary Player Phase might, providing a Brave effect upon initiating as long as she’s within two spaces of her support partner—and unlike normal Brave weapons, Silesse Frost doesn’t detract from any of her stats and actually enhances her offenses by an ample amount. Its effect is fairly simple, but rather effective at its intended purpose.

Erinys can unsurprisingly leverage her Silesse Frost quite well thanks to her statline’s impressive offensive lean. With a combination of 37 Attack and 41 Speed, her damage potential is already admirable at base—elevated further by her weapon’s accompanying boosts and her access to four-point Assets in both stats.

Her flying status reaps several benefits to her overall performance, including flexible mobility, class-exclusive buff support, and the ability to equip useful flier-exclusive abilities such as Aerobatics and the Rein skill line. Further, since she also happens to be melee, Erinys can access Dive-Bomb and Odd Tempest as well for further Player Phase dominance.

Erinys suffers greatly when facing off against opposing magical damage dealers due to her poor base Resistance coupled with her unassuming HP pool; this places her at risk of losing substantial health from even one of their attacks. Her offensive lean also makes this especially troublesome to deal with during the Enemy Phase.

Although she certainly appreciates the strength her flying status provides, Erinys does face some detriments because of it as well. This includes a debilitating weakness to flier-effective damage—the likes of which are rather prominent with how many archers are in the game—and somewhat disappointing B skill access, as she would have benefitted immensely from powerful options like Null Follow-Up and Lulls.

What seals are you expecting/hoping for this time around?
So, what sacred seals are you expecting for this Tempest Trials? Which skills would…
Tempest Trial Team Flex thread #6: One angry boi and one bored girl
IMG_20210517_235541720×511 204 KB This is probably a bad team but anyways I will use…
Special heroes May 2021 (bridal grace)
4 posts - 3 participants Read full topic …
Special Heroes - Bridal Grace (May 2021)
Do you, Feh, take powercreep as your lovely wedded husband/wife …
F!ike futureproofing and desired ending IVs
If I ever get the choice, should I change over his IVs into +Spd, or even neutral? In…
Read More