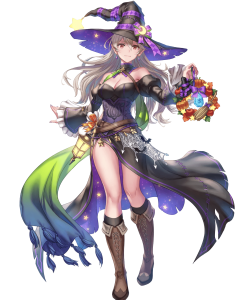 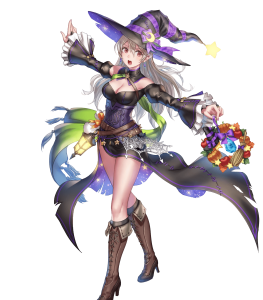 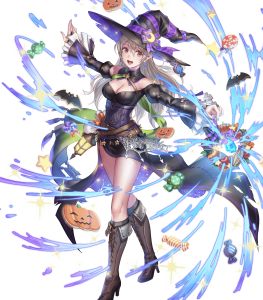 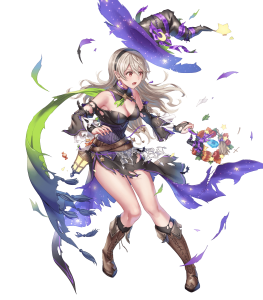 Moonlight Stone is an amazing weapon that allows Halloween Corrin to function similarly to her Legendary counterpart, but without needing Shield Pulse in the B slot. In addition to accelerating her Special trigger, it also charges it by 2 at the start of turn 1, allowing Corrin to fully charge her Negating Fang and reduce the damage of her foe’s first attack. Moonlight Stone also provides a boost to all stats, increases Corrin’s Special charge gain and decreases her foe’s, and reduces damage taken by 8 when her Special triggers.

Halloween Corrin shares her Legendary Special, Negating Fang, which reduces her damage taken from any attack by 30% and boosts her next attack by 30% of her Atk stat. This allows her to survive single hits in most cases and often KO her foe in one counterattack.

Corrin’s status as an infantry dragon allows her to use amazing skills like Atk/Spd Finish 4, Dragon’s Wrath 4, and the Dist. Counter (D) seal.

Like past dragon versions of Corrin, Halloween Corrin has an extra 5 or so base stat total compared to her contemporaries.

Corrin’s base 42 Atk and 45 Spd are top notch, allowing her to deal high damage and outspeed most foes.

Corrin takes extra damage from dragon-effective weapons such as Falchion or Ifingr.

Both Negating Fang and Dragon’s Wrath 4 only provide damage reduction on the first hit Corrin takes in combat, so if a foe strikes twice using an effect like Dire Thunder or the Triangle Attack status from Bridal Catria, she will take full damage from the second hit.

Corrin is an extremely powerful unit with little competition, however, she functions relatively similarly to Flame Lyn with the addition that Lyn is not weak to dragonslaying weapons. Legendary Corrin also uses a relatively similar, though somewhat weaker, build.