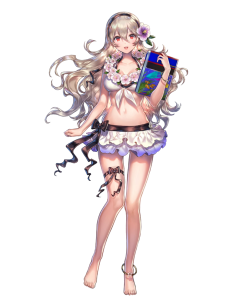 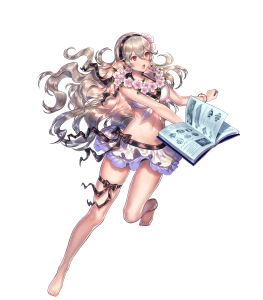 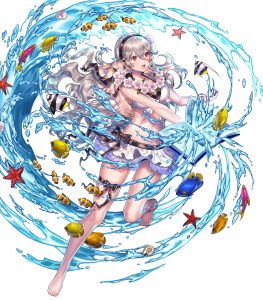 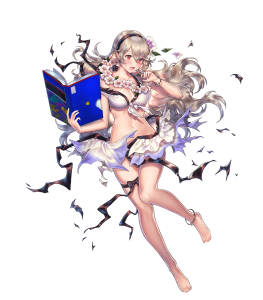 Standard blade tome setup, Summer Corrin (F) strongly wants to have flier teammates that can provide Hone Fliers and Fortify Fliers buffs in order to power her blade tome for massive damage output. With +Speed IV, Life and Death, and Hone Fliers buff, Corrin will reach a massive 51 speed, allowing her to double even units with significant merge advantages over her. Each of her two attacks will be dealing massive damage thanks to her blade tome, resulting in her having incredible offensive potential that few units can withstand.

Choice of special is based on preference. Glimmer works well with the massive damage output from a blade tome, as it can change a two hit kill into a one hit kill when activated. Compared to Glimmer, Moonbow trades raw damage potential for more reliable damage output, as it will provide a consistent amount of damage no matter how much raw damage Corrin does. Draconic Aura is the option to pick for maximum damage, as the percentage of attack added is actually factoring in the additional damage from blade tome due to buffs, despite how the description reads. The downside is that it has a longer charge time, and may warrant consideration of the Heavy Blade seal to compensate.

Life and Death is the A slot of choice, due to the massive increase in offenses, but with the caveat that this is based on the assumption that Summer Corrin is being run on a Flier team with access to Hone Fliers and Fortify Fliers. With Fortify Fliers, she reaches 54 physical and 61 magical bulk. If Corrin will not have consistent access to Fortify Fliers, then she should run Fury instead, as the extra bulk granted will compensate for the lack of defensive buffs. Fury has the additional benefit of recoil damage which will help her enter Desperation range.

Speed+3 is the recommended seal, though it is worth consideration that with +Speed IV, Life and Death, Hone Fliers buff, and Speed+3 seal, Corrin will reach 52 speed, which is overkill in a large number of matchups. It is primarily useful in matchups against units with more merges than Corrin, which is often the case in Arena. An alternative is Heavy Blade, which pairs with Draconic Aura for a significant increase in damage.

Despite having lower defense than typically desired in a TA/Raven unit, Summer Corrin is fully capable of running the build thanks to a combination of access to Flier buffs and Iote’s Shield. This build is intended to give a flier team access to a reliable counter to archers. Because of the build’s reliance on Triangle Adept, archers running Cancel Affinity will present issues, however, and you will have to rely on the other team members to handle those. Thankfully, the superior mobility offered by fliers makes this relatively simple to achieve.

The basic core of the build is Blárraven+, Triangle Adept, Iote’s Shield, and Quick Riposte, which in tandem allow Corrin to bait and kill archers and red mages on Enemy Phase, even ones with incredible speed like Brave Lyn. She is also capable of attacking on Player Phase, thanks to the combination of her decent offensive stats and access to Flier buffs. As a result, she can also easily handle melee red units.

Luna is chosen due to its 3 cooldown, allowing it to either activate in a single combat thanks to Quick Riposte, if Corrin is doubled, or otherwise be available in the next combat if she is not doubled. Corrin’s base Fortify Fliers is a good choice for a Flier team, while Guidance is an excellent choice for support infantry and armor allies. The Guidance seal is not recommended because losing Iote’s Shield results in Corrin taking significantly more damage from archers, potentially even dying despite her build.

As a flying mage, Summer Corrin has access to both the excellent mobility and buff support of fliers. Both of these things contribute greatly to her decent offensive spread, allowing her to equip a blade tome and become an incredibly potent offensive powerhouse. Despite having low-ish bulk, Corrin’s speed allows her to easily escape a huge portion of doubles, particularly when accounting for support from her team. This means that all she has to do is be able to survive a single hit, which she is capable of doing in most cases, barring strong green units.

Despite having the innate flier weakness to archers, the Iote’s Shield seal allows Corrin to effectively provide a reliable check for archers in a flier team. However, Corrin suffers in that she is noticeably weaker outside of a flier team, regardless of build, as she is outclassed in both of her builds without flier buffs.

Overall, Summer Corrin is an excellent addition to a Flier team. She is serviceable outside of one, particularly if given access to Guidance, but she most excels with Flier support.

Corrin enjoys the same benefits that all other fliers enjoy, which are superior mobility and access to flier buffs.

As the only flying blue mage, Corrin is uniquely able to run a blade or raven tome set and also be able to move over almost all terrain.

The powerful Hone Fliers and Fortify Fliers buffs make it easy to stack an incredible +24 damage to a blade tome, or simply buffing all four stats otherwise.

While 31/34 attack and speed aren’t particularly impressive compared to the likes of Linde, they are still decent enough on their own. They serve as a solid foundation that allow Corrin to become a monstrous offensive threat in a flier team.

With Life and Death and Hone Fliers, Corrin’s 31/34 offenses become 42/45. Accounting for a Blárblade+ and +Speed IV, Corrin can have a 55/48 offensive spread, before incorporating the bonus damage from the blade tome’s effect.

Summer Corrin’s status as a mage flier give her significant utility in any team, though she will always shine the most in a flier team.

She can provide massive damage with a blade tome, check archers with a raven tome, and even provide additional mobility to non-flier allies with Guidance.

While being a flier comes with a number of benefits, Summer Corrin also suffers from the same weakness as other fliers, which is a vulnerability to archers.

Her low-ish defense makes this an even bigger issue, though this can be mitigated with the Raven tome build, thanks to Iote’s Shield seal.

While Summer Corrin is a decent unit on her own, she relies heavily on team support to function at her full potential.

In particular, she strongly desires flier buff support. Without it, she’s outclassed by other units.

While not an overt weakness, Summer Corrin has to compete with the likes of Cordelia and Tana for the blue slot on a flier team.

However, her role in a team can be considered different enough that she can easily be ran alongside either of them.

Summer Corrin build that generally has a lower damage ceiling than the Bladetome family but is much more consistent and provides support to other mages to boot. If Swift Sparrow 3 is unavailable, Life and Death 3 or Fury/Desperation combo are fine alternatives. A sweep skill in B slot can be used in Aether Raids Defense given the combat buffs to Spd.

Owl because blade is boring and really annoying to use on a 3 infantry team.

Blue Flame because it goes well with the rest of the build.

A/S bond because it works really well with Aerobatics and Guidance.

Aerobatics because 3 infantry team and movement is OP.

Guidance because 3 infantry team and movement is OP.

A/S bond again because she really needs both of the stats.

She's also the MVP of my flier emblem which I considered to be the best team format for my heroes so far.

I us this corrin on my flier emblem where she gets a hone and fortify buff making her stats 56/46/31/34 which is really good.especially with a bladetome.

Use reposition because it´s the best movement skill for flyers.

Glimmer has a short cooldown and helps with her high bladetome damage.

Fortify fliers to support the team

Speed +3 seal so that she´s even faster

Hitting 30 res with a super boon, Summer Corrin has the ability to act not only as a pure nuke, but also decently tank magic, giving a defensive utility to Flier Emblem. Using her decent res, Corrin can then use the Distant Defense seal combined with Fury to act as a one-time reliable magic tank, even against non-moonbow Reinhardt, and then go about her usual offensive capabilities. This set doesn't particularly hinder her offense either, due to most of her firepower coming from flier buffs, making this set an interesting investment as a mixed bag of a mage. 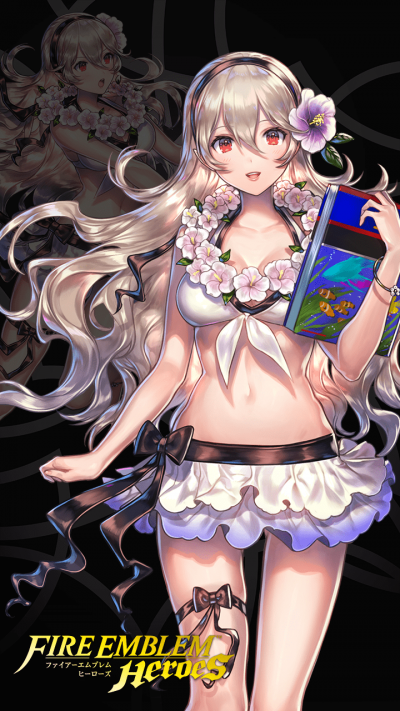 Unorthodox hero choices
After seeing two posts on here it had me thinking: Will we ever get banners with weird…
Potential fates banner idea
(To preface im not good wiþ stats so intsead ill describe ðeir allocation) First off…
An Ode To Lynja
Oh Lynja, how I love thee; let me count thy ways… (No bonus = F so I work with what I…
Wish I could change my pose
I really like how my Summoner looks, but I kinda wish I could give him Echidna’s idle…
New players that good life
My nephew decided to take my account that I used. Maybe I will migrate to her one day…
Read More