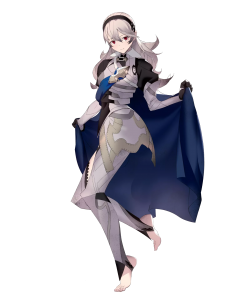 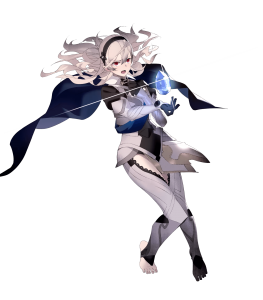 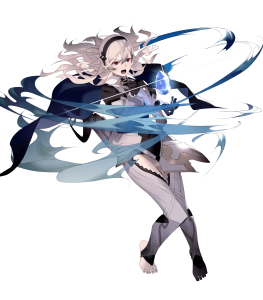 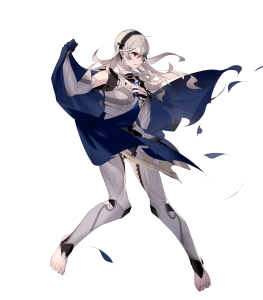 I’ve Made My Choice! (Defensive Tank)

This is a fairly standard build for any defensive dragon unit. Combining Lightning Breath with Steady/Warding/Fierce Breath turns Corrin into a highly effective Enemy Phase unit, able to counter at range while rapidly charging her Special. The increased Special charge rate allows her to work around the Special cooldown penalty from Lightning Breath.

Aether is the Special of choice for this set since it can be charged quickly thanks to Steady/Warding/Fierce Breath; the combination of healing and damage is perfect for increasing Corrin’s damage output and staying power. Blue Flame is a strong, lower cooldown alternative, though the high investment cost, positioning requirement, and lack of healing can make it a bit riskier in drawn-out maps. Budget alternatives include Bonfire as well as Moonbow if Steady/Warding/Fierce Breath are unavailable.

Steady Breath is always a great choice for Corrin due to increasing her already good Defense, making her a great physical tank. Fierce Breath is a strong alternative; while it doesn’t contribute to Corrin’s bulk, the extra Attack is immensely helpful. Finally, Warding Breath isn’t particularly impressive due to Corrin’s magical bulk being poor, but the most important function is the increased Special charge. If these aren’t available, then Atk/Spd Bond is decent (particularly if using Blue Flame), or Fury for budget purposes.

Quick Riposte is a vital skill to have; while Corrin has good Speed, she still lacks the means to double speedy enemies as well as those with skills that negate follow-ups. For Corrin, Quick Riposte is best run as a Sacred Seal so that she can utilize a different B skill like Null Follow-up, Guard, or Null C-Disrupt. All three significantly improve upon her tanking skills considerably; Null Follow-Up is an infantry-exclusive skill that allows Corrin to shut down enemies with skills that guarantee doubles like armored units with Bold Fighter. Alternatively, Guard allows Corrin to minimize damage taken from Special-reliant units, such as Ayra and Zelgius. It also allows her to safely handle armored units who are running Bold Fighter, though not quite as effectively as running Null Follow-Up. Corrin isn’t the best unit to utilize Null C-Disrupt due to her poor magical bulk making it dangerous to fight staff units, but she can effectively handle most physical threats as well as a fair number of staff units that she can avoid getting doubled by (though she’ll take quite a bit of damage doing so).

Wrath is also a strong option for Corrin; the +10 damage is incredibly useful for increasing her damage output, and the Special charge gain can be useful since her Speed is high enough to be competent at Player Phase even with a fully Enemy Phase-oriented build like this one.

If running Quick Riposte as a B skill instead of a Sacred Seal, then Corrin’s Seal can be pretty much anything; some good choices include those that increase her bulk like Close Def and Distant Def, while Atk Smoke allows her to provide a bit of team support while also boosting her survivability.

This build aims to utilize Corrin’s base Dark Breath to heavily cripple enemy teams with heavy debuffs. While the optimal iteration of this build is pretty high investment, it’s still fully functional even on a more budget setup. The basic premise is to utilize Windsweep to safely apply Dark Breath’s debuff on Player Phase, then easily take out everything that attacks Corrin on Enemy Phase due to the massive debuffs.

Since this build relies heavily on Windsweep, it’s very important to get Corrin’s Speed as high as possible. Generally this means a +SPD Asset and a +Spd refine on Dark Breath, but Corrin can also run +ATK if she opts to not use Distant Counter and/or if she has buff support from her team. The exception to this is if Corrin runs Sturdy Impact, as preventing enemy follow-ups offers a strong enough level of protection that Corrin can afford to avoid running Windsweep if desired.

A low cooldown Special like Moonbow helps ensure that Corrin will have her Special ready to activate on Enemy Phase after she’s applied her debuffs. Alternatively, she can opt to use Luna if using the Flashing Blade Seal or if she has access to Infantry Flash support.

Distant Counter is a strong choice for this build because it allows Corrin to deal with ranged units on Enemy Phase after debuffing, but it’s not strictly necessary. Sturdy Impact is an excellent alternative if not using Distant Counter, as preventing enemy follow-ups is strong enough that Corrin can consider running a skill other than Windsweep. Other alternatives are the stat-boosting A skills like Atk/Spd Solo, Swift Sparrow, or Fury (for budget purposes).

Windsweep is important to help Corrin safely apply her debuffs without having to risk taking on enemies head-on with no major advantages. If Corrin is running Sturdy Impact, then she can opt for a different B skill like Wrath for greater damage output through Specials or Null C-Disrupt to be able to easily handle enemies that she’d otherwise be unable to counter, like those with Firesweep weapons (note that since she doesn’t have Distant Counter, she still won’t be able to retaliate against ranged threats, with or without Firesweep weapons or Dazzling Staff; Corrin can choose to combine Distant Counter with Null C-Disrupt, but this can be a bit risky since there’s nothing stopping her from getting doubled through skills).

Quick Riposte is a fantastic Seal that allows Corrin to ensure that she can double on Enemy Phase; however, properly stacking Speed will allow Corrin to easily double even some of the fastest units in the game thanks to Dark Breath’s debuff. This means that other Seals are viable, such as the Flashing Blade Seal and the possibility of combining the Savage Blow Seal and C skill to heavily cripple enemies. Finally, Phantom Spd isn’t quite as effective as the other Seal options, but it can be useful to allow Corrin to activate Windsweep far more easily and consistently.

Corrin is unfortunately a bit overshadowed compared to other blue units, including fellow blue dragons like Nowi (who is also a launch unit like Corrin). However, this doesn’t mean that she isn’t an effective unit. She is still a dragon, which means she has access to the Lightning Breath + Steady/Warding Breath combo, as well as many other perks that dragons enjoy.

One of Corrin’s biggest apparent flaws is her unimpressive Attack stat; fortunately, it’s not particularly hard for her to make up for this since a +ATK Asset nets her +4 instead of +3. In addition, dragon breath weapons make it pretty easy for her to deal good damage thanks to their adaptive damage trait against ranged targets, ability to combine Distant Counter (via Lightning Breath) with Steady/Warding Breath, and targeting Resistance for melee units (which generally tends to be the lower of the two defensive stats).

Overall, Corrin is a decent unit despite being outclassed by a decent number of units. Her strong Speed and Defense give her some good versatility and effectiveness in her builds, which can allow her to pull her weight on a team.

At 34 base Speed, Corrin is one of the faster dragons. This means she has an easier time stacking Speed to avoid doubles, and can even get enough to consider attacking on Player Phase.

With 75 physical bulk, Corrin is quite sturdy against physical threats. This tankiness is improved thanks to weapon refining as well as potentially skills like Steady Breath.

As an infantry unit, Corrin has access to unique infantry skills like Null Follow-Up and Infantry Rush, and can also benefit from unique team support from skills like Infantry Pulse.

While 62 magical bulk isn’t that bad (higher with weapon refining), Corrin still struggles to tank more than a single hit from a magic damage dealer, which can be detrimental when she wants to act as a tank for the team.

Corrin’s status as a dragon has a major downside which is that anti-dragon weaponry are incredibly dangerous; Naga will rip her apart due to the combination of Weapon Triangle advantage and Corrin’s poor magical bulk, and even Falchions can be an issue despite Corrin’s color advantage and strong physical bulk.

While Corrin can be quite effective with her optimal builds, one major problem is that they all need very high investment skills to function properly. While she does have budget options which can make those builds usable, they will never be quite as effective as high investment setups.

Only used on ARD for cornline.

Dark Breath because like I said the other 2 times its just the best one.

Bonfire because maybe she'll kill something.

Steady Stance to not die hopefully.

Dull Close to not die hopefully.

Drive Atk to maybe enable another corn to kill something.

S/R bond to hopefully not die to magic.

Dark Breath because its the best one.

Bonfire because she really needs the damage.

Drive Atk to buff up the atk of other corns.

Used for all PvE things, occasionally swapping B and/or seal out for chills.

Dark Breath because its literally the best breath.

Bonfire because her atk is too low to not use it.

DC to hit ranged units. While her res bulk is pretty spooky she usually beats mages.

JDA because she really really needs as much atk as she can get.

FB because Dark Breath lets her double pretty much anything she will fight, letting her proc Bonfire every fight on either phase.

+10 merged. S support with Azura. Summoner supported. Receives 0 (plus -2 from Shield Pulse) cooldown at the start of the first turn.

Best girl, and 150% invulnerable to anything and anyone.

Here is my defensive tank Corrin F, a set based on the great defense of Corrin and for support her team

At first, Dark Breath +Def, this refinery give defense and HP so this is quite useful and the bark breath is here principally for the debuff in Def and Res for the enemy to allow your teammates to kill enemies more easily
Next we have Swap or Reposition, I take Swap here to change from the other set for her, with Wings of Mercy, It allow her to protect some squishy teammates from heavy physical Attack and counterattack with debuff
The special is Sol, just to allow her to stay very tanky all along the stage, but this skill is more interesting is mode like Tempest Trials or Grand Conquest, Vengeance or Bonfire can be great options because of huge HP and Def stats
Now we have Fortress Def 3 to gain a big boost in Def instead of her attack
B skill is Wings Of mercy in complementarity of Reposition or Swap to protect teammates
In C we have Spur Atk 3 to give a boost in attack to adjacent allies during fight
In the end, I choose Earth Boost in S Skill for give here another Def boost thanks to a huge HP stats but you can also choose one of the stance Skills to gain boost in other stats but I suggest Steady Posture or Stance, Quickened Pulse is also an option

In this Set, no Lightning breath or Distant Counter but a total defensive set support that allow huge counterattack to enemies not prepared to
Hope you enjoy it!