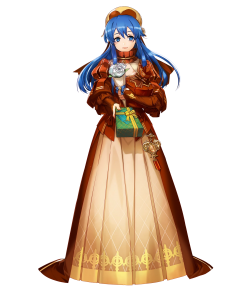 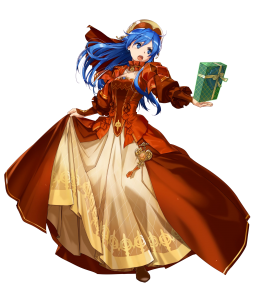 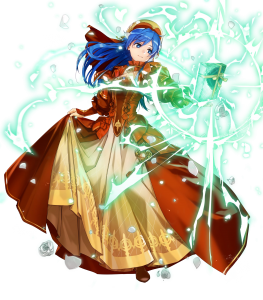 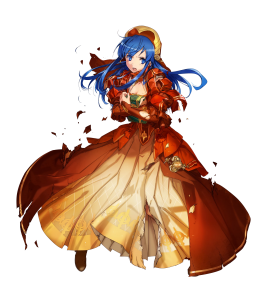 Be Mine Or Face My Blade! (Blade Build)

With a +Speed IV, Fury 3 and and a +Speed 3 Sacred Seal, Valentine Lilina can reach a 38/39 Attack/Speed spread that sets her up nicely for a Bladetome set. Alternatively, Atk/Spd Solo can be used to further boost her offensive power, however at the cost of some bulk and the safety of self-activating Desperation against foes that are unable to counter attack.

Lilina (LA) appreciates the extra bulk from Fury 3. Because of her decent Speed, she’ll be able to prevent most double counter attacks from foes that aren’t running Quick Riposte. After a single combat, she’ll be safely in Desperation range, ready to obliterate most of her opponents in typical Blade Mage fashion.

In the C slot, Fortify/Hone Cavalry allows her to set up her mounted allies. Additionally, self-sufficient skills like Even or Odd Spd Wave could also be a viable option. Lastly, for mixed teams, Tactics skills also allow Valentine Lilina to set up her teammates.

Love Is In The Air (TA Raven Build)

Since Valentine Lilina is essentially Cecilia with a more offensive stat distribution, she’s a compelling candidate to run a Triangle Adept Raven build. Her 5 more base Speed than Cecilia makes a difference when it comes to defensive Speed tiers (especially if cavalry buffs are factored into the equation), and her 3 extra Attack comes in handy when facing down blue or colorless foes other than Reinhardt and Brave Lyn.

Everything about this build is reasonably standard. Gronnraven, of course, grants a Weapon Triangle Advantage against colorless foes, which is then magnified by Triangle Adept. Bowbreaker prevents follow-ups from archers and allows Valentine Lilina to double any archer that she attacks -- barring Cancel Affinity and/or Firesweep Bow users, Valentine Lilina is able to comfortably bait any archers she’ll come across. Even then, the Cancel Affinity / Firesweep Bow combination does not tend to outright KO Valentine Lilina even when she’s not buffed, so one of her allies can safely dispatch anyone who uses a Cancel Affinity / Firesweep Bow build. Distant Def further buffs her decent defensive stats and increases her baiting abilities.

Draconic Aura and other 4 cooldown Specials are ideal here, as if Valentine Lilina baits Reinhardt or Brave Lyn, she will KO them have a Special charged and ready to devastate another member of the enemy’s team. Astra is a decent alternative if Draconic Aura is not avilable, but be warned that it is very ineffective on opponents with high Defense. AOE Specials like the one contained in Valentine Lilina's base kit are also possible to use, though one will need to be careful to never activate it on foes carrying Vantage.

For a C slot skill, Atk Smoke functions as an AOE debuff that’s particularly effective since Valentine Lilina will primarily be baiting ranged foes. If a team runs one infantry or flying unit, however (perhaps as a bonus unit…?) Atk Tactic is a great choice that doesn’t require investment. If a team is all cavalry, however, the usual options of Hone Cavalry / Fortify Cavalry / Goad Cavalry / Ward Cavalry work fine here.

Galloping into the fray in the season of romance, Valentine Lilina enters the scene as a green cavalry mage. Sporting 35 / 30 base Attack and Speed, she’s not exactly an offensive juggernaut, but with reasonable skill investment Valentine Lilina is a rather potent force -- especially when compared with her most direct competition for a spot on a cavalry team, Cecilia.

The reason for this is that since Valentine Lilina’s Speed is not unsalvageable (unlike Cecilia), with a proper setup she is able to consistently perform doubles. When combined with a Blade tome and class-specific buffs, this boosts her damage output to enormous levels. Plus, the few extra points of Atack that she has over Cecilia helps boost the damage she can deal without buffs, making her decidedly more useful over her contemporaries and counterparts. If a team needs a high firepower cavalry mage whose name is not Reinhardt or one finds that Gunnthra fills a less useful purpose, Valentine Lilina is a direct improvement over Cecilia -- mergeability potential notwithstanding.

There currently aren’t a lot of green cavalry mages, and Valentine Lilina arguably runs a Blade tome build better than at least half of them.

Valentine Lilina is able to run either a Blade tome or a Raven build very well, which means that she can flexibly fit an offensive or defensive role depending on how she is built.

May Be Hard To Justify Her Use

As a limited seasonal, Valentine Lilina has some clear disadvantages over her main competition, Gunnthra, Cecilia, and WT Olwen.

Although she possesses a skill (Atk Tactic) that encourages her use in mixed teams, Valentine Lilina performs best when she’s in an all cavalry (or heavy cavalry) team composition that can provide her with buffs. This limits her versatility in a constantly changing meta.

I hate this Lilina because I was going for LA Hector but instead I got two of these mofos. But she is really good anyways with the cavalry buffs and all that. Breaks 40 spd which is always good.

The ULTIMATE Reinhardt counter that takes less than 5 damage even against the Quickened Pulse + Moonbow combo. It's an expensive and specialist build, but, man, it's well worth it.

It doesn’t show up here but I also gave her darting blow as her sacred seal. Reposition her and she hits 60 atk and 42 spd. I run her with LA Roy who has ward cavalry so she can get +6 to all her stats, making her a monster with Gronnblade

With just the 1 merge and SS, Lilina's HP lets her use 1 Ardent Sac. on either tank to enter Desperation.

Was trying to get LA Hector and got this instead. With -Spd. Sigh.

Still, even with that IV her stats are comparable to or better than neutral Cecilia, so I built her anyway. I use her on a PvE horse emblem team.