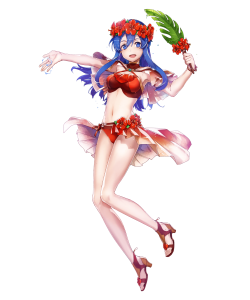 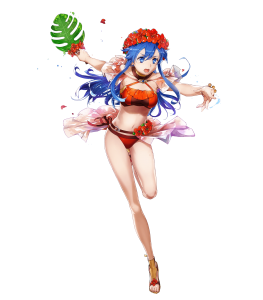 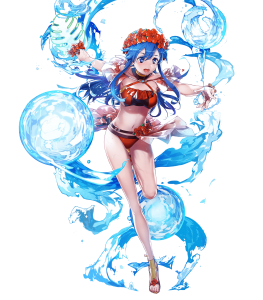 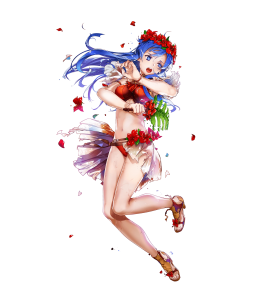 -DEF: Summer Lilina has terrible Defense. Combined with her low HP, she is extremely susceptible to getting KO’d in a single hit from pretty much any physical damage dealing enemy, which means that taking a -DEF Flaw will hardly affect her performance.

Summer Lilina has a statline that is very typical for her, featuring high Attack and Resistance, below average Speed, and poor HP and Defense. This statline makes her a fantastic candidate for a one-shot build, and her base kit is very well suited for this - particularly her base weapon, Broadleaf Fan.

Summer Lilina’s mass debuff capabilities synergizing perfectly with her raw damage output makes her a fantastic choice for a Vantage sweeper in Aether Raids, though her status as a red unit can be problematic against some bulkier blue threats (though meta threats like Ophelia are hardly an issue thanks to her targeting their Defense).

Overall Summer Lilina is not a particularly versatile unit, but she does have a niche that she excels at.

As is typical for Lilina’s various incarnations, Summer Lilina has high Attack and can boost it even higher thanks to getting +4 instead of +3 with an Asset. This also synergizes particularly well with her base kit (mainly her weapon, Broadleaf Fan).

Summer Lilina’s Resistance gives her strong magical bulk, but also allows her to more easily apply debuffs to enemies with skills like her base Sabotage Def.

Summer Lilina’s base kit is pretty strong and synergistic, though she can be significantly improved with some investment.

Thanks to her poor HP and Defense, Summer Lilina is highly susceptible to getting KO’d by any physical damage dealers (even green units).

Though being a cavalry unit comes with the perks of strong mobility and access to unique buffs, it does come with heavy limitations including a weakness to anti-cavalry weapons, limited movement on certain maps due to forests and trenches, and poor skill availability.

As a seasonal unit, Summer Lilina is more difficult to obtain multiple copies of for merges and to obtain optimal IVs.

Arena Flex And The Summer Of 10's
I dipped into my feather reserves to finish off two of my Arena core units. I need…
Thoughts on this Kris build
I had an extra Sothis around Any skills that you think would fit better on him? Or…
I feel big-brained today
My first time fully clearing a resonant battle map without the pm1 guide. Got every…
Could it be
image750×1334 407 KB Well, I hope I’ll be able to maintain my place in the ranking…
Hard ninja game mode
Is it just me, or is this ninja killing game mode becoming harder and harder? I used 3…
Read More