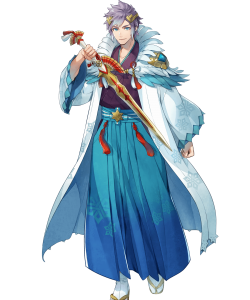 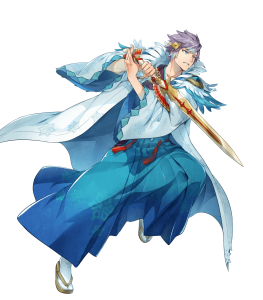 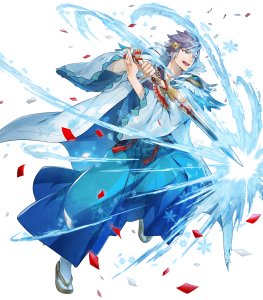 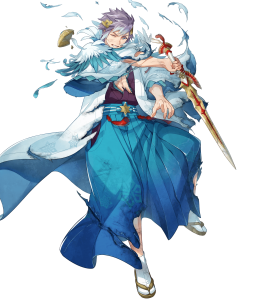 This set focuses primarily on Enemy Phase combat by playing to Hrid’s strengths, making Attack and Defense the choice boons in order to improve his performance. For his weapon, Safeguard makes for the strongest overall option. Not only does it massively boost his physical bulk when initiated on, but it also pairs exceptionally well with Specials that have a cooldown of 3. As for the Special itself, Blue Flame makes for a great choice thanks to its raw power as well as Hrid’s Enemy Phase playstyle favoring him being close to his teammates. If the former is unavailable, both Bonfire and Ignis make for strong and consistent options thanks to Hrid’s fantastic Defense.

Moving on to main skills, Steady Stance gives Hrid yet another massive boost to his Defense when initiated on as well as the effect of Guard. This boosts his survivability by further boosting his physical bulk as well as preventing his opponents from activating their Specials. Although this doesn’t give as big of a boost to his physical bulk, Hrid’s native Atk/Def Bond makes for a solid alternative by boosting both his Attack and Defense when adjacent to a teammate.

Quick Riposte is essential for Hrid, as he is reliant on it to perform follow-up attacks in the Enemy Phase. Assuming Hrid is not running Steady Stand in his A slot, one can also choose to move Quick Riposte to the seal slot in favor of running Guard as his B skill. Guard will greatly reduce damage taken from opponents that rely on activating their Specials such as Ayra, Karla, and Zelgius.

Def Smoke is a great choice of C skill for Hrid as a standalone unit. By reducing the physical bulk of opponents around him after combat, any affected targets that initiate on him afterward will take even more damage. A more team-synergetic option is Hone Fliers, as it allows Hrid to be a benefactor on a flier-centric team by buffing his allies. Otherwise, the C slot can be replaced as needed to suit the team.

Hrid has several options for Sacred Seals. Atk/Def Bond makes for a very strong option here as well by granting Hrid even more Attack and Defense when adjacent to a teammate. Close Defense makes for a good alternative, as it will reduce damage taken from all melee opponents when initiated on. If not already being used in the B slot, Quick Riposte is pivotal in allowing Hrid to perform follow-up attacks in the Enemy Phase. Finally, Atk Smoke pairs well with Def Smoke by reducing the damage of opponents around him after combat and increasing his overall survivability.

This build aims to build on Hrid’s solid magical bulk in order to turn him into an effective magic tank and ranged combatant through the skill Distant Counter. As such, Barrier Blade makes for the choice weapon by greatly boosting Hrid’s Resistance when initiated on.

In addition to Attack and Defense, Resistance also makes for a good choice of boon in order in order to even out his overall bulk as well as making it more difficult for magical attackers to take him out in a single round of combat. For his Special, Blue Flame and Bonfire remain choices for their sheer damage alone though Aether can make for a good alternative by giving Hrid self-sustainability through its healing aspect at the cost of a longer cooldown.

The rest of this set bears many similarities to the previous one. Hrid still needs Quick Riposte in order to perform follow-up attacks in the Enemy Phase, making it the best B skill for him to have. Smoke skills such as Def Smoke and Atk Smoke also remain a great option in both the C and Sacred Seal slot by debuffing opponents around Hrid after combat.

Distant Defense makes for the best choice of Sacred Seal by reducing damage taken from all ranged opponents when initiated on. However, Iotes Shield can make for a situationally useful alternative when facing opponents that have flier-effective weapons such as archers.

Thanks to his exceptional Attack, Hrid can take a page out of Cherche’s book by adopting the classic Brave weapon offensive set. This ORKO playstyle makes Attack to boon to have above all else. For his Special, Moonbow makes for a fantastic choice by potentially activating every single round of combat on Hrid’s second hit when combined with the Heavy Blade Sacred Seal. Draconic Aura makes for a stronger but less consistent alternative, as it will only activate every other round of combat.

In order to maximize the amount of damage Hrid can do in a single round of combat, Death Blow makes for the best overall A slot option by granting him a massive boost to his Attack on initiation. Chill Def is a good B skill both for increasing Hrid’s damage output as well as the overall support that he can provide to his team. While Chill Def can greatly increase physical damage against the affected target, it is not always consistent. This is due to it targeting the unit with the highest Defense on the enemy team and not necessarily the unit with the highest physical bulk.

Odd Attack Wave makes for a great choice of C skill, as it boosts Hrid’s self-sufficiency by granting him a strong +6 boost to his Attack on odd-numbered turns. Last but not least, Attack +3 is a good choice of Sacred Seal in giving Hrid a solid boost to his damage.

For his New Years resolution, Hrid decided that he was already perfect. Bearing extremely similar stats to his cavalry self, his New Years variant excels in many of the same areas. Hrid’s strong values in both Attack and Defense allow him to both dish out and take physical damage. Hrid’s magical bulk also remains solid at a base value of 68 to ensure that he does not easily fall to magical damage. Furthermore, Hrid’s status as a flier comes with an innate advantage in mobility as well as access to powerful class-exclusive buffs such as Hone Fliers.

Hrid’s statline remains very polarized with the obvious dump being his Speed. With an astonishingly low base Speed of 19, Hrid is highly susceptible to getting doubled by nearly any opponent he faces. This can greatly increase the amount of damage he takes as well as making him reliant on skills such as Quick Riposte in order to ever double himself.

Despite his weaknesses, Hrid remains a powerful Enemy Phase duelist and a great addition to any team in need of a strong tank.

With a standout base value of 38, Hrid hits very hard with his raw Attack alone, granting him consistently high damage in both Player and Enemy Phase.

Hrid’s exceptional physical bulk of 78 makes him a great physical tank as well as an effective user of Defense-scaling Specials such as Bonfire and Ignis. While not as high as the aforementioned, Hrid’s magical bulk isn’t bad either and allows him to do a decent job in tanking magical damage.

In addition to superior mobility, Hrid has access to class-exclusive buffs such as Hone Fliers and Fortify Fliers.

While Hrid’s incredibly low Speed does help him somewhat by allowing him to charge high cooldown Specials in a single round of combat, it is also a major weakness. Getting doubled can greatly increase the amount of damage that Hrid takes as well as making Specials easier to charge for his opponent.

Due to his status as a flier, Hrid will take greatly increased damage from units with effective damage against him such as archers.

This build is meant to be used only on a team with a unit that can inflict 20 damage on an ally such as lief or fallen berkut. It is incredibly important that this version of New Year Hrid has a -Hp bane and is not merged. This will allow him to go under the Brash Assault range without going into combat first. This will also. Allow any dancers with wings of Mercy to teleport to him and help him take out a whole team. Despite being put at 19 health before sending him into combat his defense is so high that he should be able to take a hit on the defensive from some red or green physical units as his defense will be boosted to a very strong 44 while his hp is low. So long as you run a very specific team and are careful with unit placement this incredibly niche version of New Year Hrid can be massively powerful and doesn't require any rare skills - just the support of a relatively rare unit and a very specific bane.

A: Fort. Def/Res 3 for a boost of 6 def/res at the cost of 2 atk. His atk is very high as is so the drop makes little difference. Alternatively, Bracing Stance 2 works to give him +4 def/res on enemy initiation.

B: Quick Riposte 3 so that he can double on enemy phase. Vantage works well too, depending on the situation.

Seal: User's preference, but I tend to use Iote's Shield here unless the map does not have any archers.

He tanks physical damage like no tomorrow. My favourite strategy is to put him next to someone with Fortify Fliers and watch even lance units bounce off him like birds hitting a window. I'm hoping to pull Lene soon so I can give him Safeguard+ with a Def refine for maximum tanking, because 67 Def on enemy phase is just hilarious.

Right now he reaches 68 Atk and "just" 60 Def with Hone/Fortify and Atk/Def Bond active on dual phase, which still makes his Bonfire hit like a nuke.

Enemy Phase Tank that relies on DC + QR to dish out damage. When utilized correctly, Hríd's decent RES and high DEF can be used to tank a decent amount of the threats that one may face in lower levels of arena. Adding to this build, one can run Iote's shield to utilize Hríd as an archer check.

This is purely a enemy phase build, made to tank either magic or physical attacks. Iote's Shield is there to stop bows from doing their thing. Although Fort. Def/Res is used, Hrid has high attack, so it doesn't really matter. With bulks of 89/87, Hrid is not going to get OHKO by most reds and greens, has enough tankiness comparable to armors.

Truly a beast. If you use the same build on a neutral Myrrh, you get roughly the same amount of def and res, yet Hrid would have more atk.