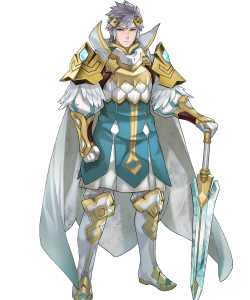 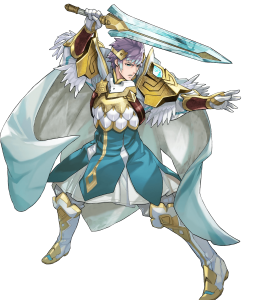 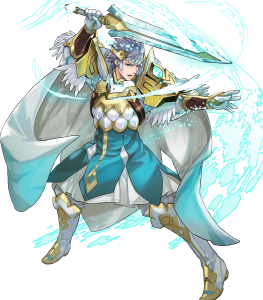 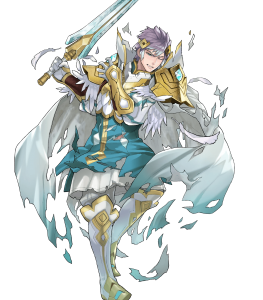 Retaining an inclination towards exploiting penalties similar to his sister Gunnthrá, Hríd’s exclusive Gjöll massively improves his combat performance against debuffed opponents through the crucial ability to deny enemy follow-up attacks while enabling his own. This allows him to freely circumvent the drawbacks of his low Speed for great control over the course of battle, and his refinement only adds on to his damage and durability through an assortment of in-combat detriments to his foe’s Attack and Defense. Considering how simple it is for Hríd to maintain all the various effects of this weapon (especially as any penalty applied on his foe triggers the base effect), Gjöll ensures that he can hit hard, tank effectively, and carry out such intentions simultaneously in both Phases with relative ease.

The second of his exclusive skills, Freezing Seal II provides a much-appreciated upgrade to the original skill’s capabilities: the base -6/-6 Atk/Spd debuff was altered to Atk/Def, making it a greater contributor to Hríd’s performance as afflicting Speed was useless to him, and its values were boosted to a more impactful -7 as well while removing the HP requirement entirely. Most notably, Freezing Seal II also became capable of simultaneously afflicting its targeted foe with the Guard debuff — a very powerful advantage given how crucial Specials activations are to most units, imparting both Hríd and his team with marked safety during combat.

Further, the single-target nature of the skill was expanded upon as well similarly to Gunnthrá’s Chilling Seal as it now “spreads,” causing any enemies within two spaces of the initial lowest Resistance foe to also be debuffed by all aspects of the Freezing Seal — Guard and all. This makes it even easier for Hríd to exploit Gjöll and aid his teammates, especially considering that while there are multiple means of bypassing stat penalties, there are conversely very few for fully working around Guard.

Hríd’s starting Attack of 37 is perfectly respectable despite his age and provides a workable foundation to build from with the plethora of damage-enhancement options he has — a four-point +ATK Asset, the visible debuffs from Freezing Seal II, literally all of refined Gjöll’s effects — to shine on the frontlines. The Icy Blade’s base physical bulk is relatively solid as well, lending itself well with his PRF skills’ accompanying durability boosts.

The three-space movement allotted by Hríd’s cavalry status complements offensive approaches quite nicely, enabling quick proximity to enemies with minimal outside assistance, while also  allowing more advantageous positioning options for defensive ones. Additionally, this lets him fit right at home among his cavalry brethren through access to class-exclusive buffs.

Considering how poorly his scoring benefits have aged compared to modern Legendary Heroes, Hríd is essentially left to contend with the limitations that his Legendary status imposes, as it renders usage in Aether Raids when it’s not Wind Season somewhat unwieldy. While he isn’t outright forbidden from being used, outside of his season, he becomes entirely unable to enhance one’s Aetheric Lift nor can he receive the stats of allied Mythics in Aether Raids — something he needs to keep pace given his combat-focused role.

The Icy Blade’s horrible base Speed makes him entirely dependent on Gjöll’s follow-up mechanics for the majority of his offensive and defensive capabilities, in turn making foes who can work around his weapon extremely problematic — most notable of which being those equipped with Null Follow-Up, a notorious skill that will only continue to see conventional use on meta-relevant threats. Further, while not outright terrible, Hríd’s middling Resistance can create issues when trying to handle magical nukes during the Enemy Phase as they may be able to OHKO him outright, and those with Null Follow-Up will have no trouble straight-up killing him.

His cavalry status imposes a few additional detriments, such as an inherent weakness to effective weaponry and an inability to traverse certain terrain which impedes mobility. These issues are more easily resolved through mindful maneuvering, though