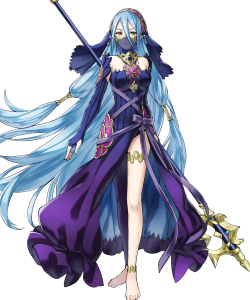 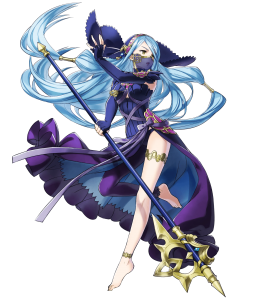 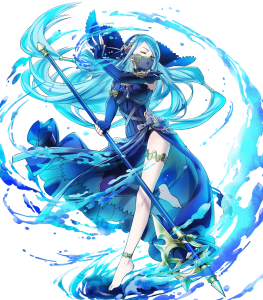 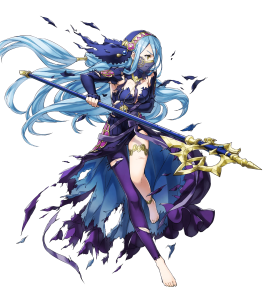 As primarily a support unit, Performing Azura focuses on staying alive and maintaining acceptable combat potential. She shouldn't be picking too many fights outside of those where she possesses color advantage, so her IVs are geared towards survival and reliability.

The concept of the build is to leverage on Azura’s relatively high Resistance stat. This is done by using Distant Counter such that she will be able to take on blue mages and kill them on retaliation. For this build we shall keep Urðr to keep her utility as a dancer who can provide stat buffs.

The typical Wings of Mercy on Dancer works, as she will be able to rush to them when the ally is below 50% health. This is extremely useful as the allies who needs help the most are usually the lowest health ones. Alternatively, Escape Route is a good option as she could bait a single combat and activate the passive to provide global support.

The remaining skills are used to further hone Azura’s ability to take on Blue Mages. Atk Ploy allows Performing Azura to have an option to decrease the opponent’s Attack. Deflect Magic is specifically to deal with Reinhardt and OIwen if your team really struggles against them. Atk Ploy is also useful as a general utility skill for your team.

With Urðr's phenomenal stat buffs, this Azura build enables her to bait a blue mage on turn 1, and focus on supporting her allies after that, making her extremely useful throughout the fight.

Azura’s core skill set is rather competent as a blue duelist that focuses on supporting her allies. We can fill up her remaining skill slots to fill up her niche as a supportive combatant.

Dancers are mostly not expected to go on toe-to-toe with a combat unit of the same color, so using her base Triangle Adept makes a lot of sense to solidify her foundations against the blue units. As she rarely engages in combat, Moonbow is her preferred option though Glimmer can also be used due to Triangle Adept amplifying her Attack in order to one-shot low Defense blue targets. Keeping her default Luna is also a decent option.

The remaining skills are used to support her allies. Wings of Mercy and Escape Route provide immediate assistance when required and can give many combat buffs (Spurs and Drives) upon demand. As the buff effect of Urðr cannot stack with other Hones, it is better to leverage on in-combat buffs as those do stack. The choice of the C slot and Sacred Seal depends on your preference of team support.

This build can check blue mages by baiting and attacking afterward, but usually, dancers should not use their turn to attack an enemy most of the time. It is more ideal for another unit to do the attacking on the behalf of Azura in this case.

For those who do not rely on Azura’s buff effect, it is possible to drop her Legendary Axe to fuse the Triangle Adept effect into her weapon. This frees up the Passive A slot for a skill that could further increase her combat prowess. Other than that, the philosophy is very similar to the Fate’s Lullaby build above.

The main difference is the supportive skill selection. As her axe is replaced, she can use buff skills without overlapping with her axe effect. This means that Tactic, Hone and Fortifies are all option that are open for Performing Azura when Urðr is replaced. The C skill and Seal slot should be adjusted to buff whatever stat your team desires.

The remaining choices are the same; Moonbow or Glimmer to quickly resolve combat and Wings of Mercy or Escape Route are present for teleportation when required; although this Azura can fight Blue units well, she is still meant primarily to assist with Sing support.

Azura is the first melee green refresher in Fire Emblem Heroes and also the first one to obtain a unique weapon. Similar to her non-seasonal counterpart, Performing Azura is a refresher who focuses more on offensive ability, making her an excellent duelist when combating those she has the Weapon Triangle advantage over. However, due to her being a refresher, she does sport a lower BST, which is a hindrance to her durability. Still, Azura boasts a unique weapon that tremendously buffs any unit that she dances. This makes her worth considering on almost any team, as she can fight, refresh, and buff units.

Sing allows another unit to act again, always a good thing to have. It grants the team tremendous flexibility in picking fights, since a unit can dive in to be refreshed back out to safety.

Urðr is a fantastic support weapon that grants a +3 boost to all stats of the unit she refreshes. This becomes a huge boon to units with proper positioning/timing and becomes particularly effective on Blade tome users.

With a high base Attack and Speed stat for a dancer-class unit, she is a rather competent duelist and can dish out a respectable amount of damage. She may not be the best fighter, but she more than holds her ground against blue units and some neutral matchups.

Her Resistance stat is another high point of her stat distribution. She will be able to take magical hits with the help of triangle advantages. However, do adjust your expectations as she is still a refresher and possesses lower BST.

As Sing is a very powerful ability, she is balanced by removing a good amount of her base stat total. Expectations in her combat abilities need to be adjusted as she does not have enough stat points to go around to excel in everything. Do expect Azura to only engage combat when she has the Triangle Advantage.

35 HP and 20 Defense is very little to work with in terms of physical bulk. It is very easy for Azura to get knocked out in a single hit so her Speed is rarely used defensively against non blue-units.

+4 merged, S support with FCorrin. Gets -2 cooldown at the start of the first turn. I need ideas for the C and S slot that are quickly becoming outdated and irrelevant.

Basic build for a dancer, used when training one unit or in Legendary Hero Battles.

Summoned on October 18, 2018
(Currently LV. 40 with no Dragon Flowers and Earth Blessing)

(Stats are +Res at +10 merges and dragonflowers without buffs stacked)

Her weapon and assist skill are fairly self-explanatory. The rest, however:

IVs: +Res, though +Spd might work in a pinch. If unmerged, the best boon is -Def, since she shouldn’t be directly in front of a defense-targeting enemy

This build relies heavily on Resistance. While Azura should ideally not be seeing much combat, if she does end up in the fray, she can take care of herself easily

As a dancer, the ideal position to be is beside one of your non-dancer allies so you can dance them frequently. Spd/Res Bond not only capitalizes on this but also gives her a boost to two of her higher stats. While she doesn’t have DC, the idea here is that mages will sometimes stop right in front of one of your units and target the ally behind them. Azura is equipped to survive them by avoiding doubles and thanks to her magical bulk

One of the core ideas behind this build is avoiding doubles and being able to hit doubles if it comes down to it. Null Follow-Up renders skills like Quick Riposte and weapons like Firesweep useless.

This one admittedly is a bit random but it does serve a purpose. Azura can chip away at her enemies’ health so that it’s easier for her allies to kill them. It also serves as a workaround to the no-DC problem since she can theoretically target ranged enemies with Savage Blow

Sometimes, Azura’s speed just isn’t up to speed. Sometimes, to avoid being doubled or to hit doubles, the enemy needs to be debuffed instead.

A solid build for an underrated unit. While keeping her signature sing ability, she also manages to reach decent combat levels of stats. This is further increased from Melon Crusher that grants +2 to all stats in either player or enemy phase so long as HP is 100%. Renewal 3 to keep Hp up for Melon Crusher. Throw in heavy support C and S skills.

Originally I ran Drive Spd and Drive Def seal as mixed buffer along with her refresh effect. But if you generally run an infantry team, Infantry rush is an amazing skill to run after you sing for an ally, they get the refresh stat boost which gets further enhanced by Infantry rush and Drive Def. So it makes running 3-4 turn cooldown specials that much easier to proc. Especially with dragons around that have that extra cooldown special from Lighting Breath + and run Steady Breath, it makes them that much more offensive in both the player and enemy phase if they are nearby or get sung for. 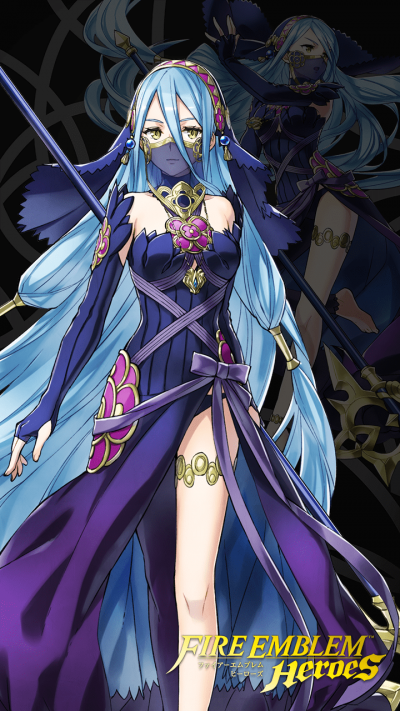