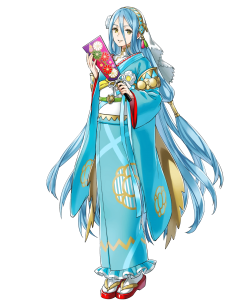 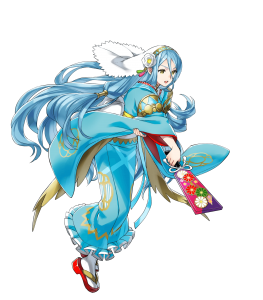 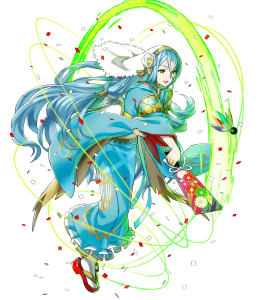 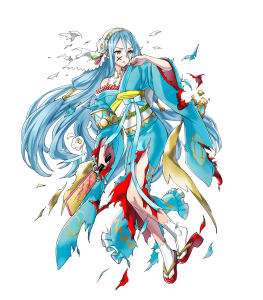 Before looking at movement and unit type, Azura has a very strong Speed stat and a lowish Attack stat, rounding out with a low Defense and decent Resistance.  In the end, her IVs matter less than a strictly combat unit due to her utility as a team support.

Azura is optimized to support fliers and this set will allow her to do so to her full capacity- though with a few small tweaks, it can also work to support her infantry and armored allies as well.

With the suggested set, Azura can not only Sing but also offer her nearby flier allies +6/+6/+6/+2 buffs during combat. If Geyser Dance is inherited, she can use Atk Ploy in her seal slot and offer one ally +6/+6/+6/+6 after dancing them. Flier Formation is still preferred due to the remarkable synergy with flier emblem- this dramatically increases her mobility with an all flier team, allowing her to teleport as many as three spaces away to dance a unit four spaces away.

If using her with infantry or armored allies, Wings of Mercy or Geyser Dance would likely be preferred, as well as utilizing Guidance in either the C slot or seal slot for increased mobility. Drive Spd is an interesting option in the C slot, as it will pair with her weapon to offer her nearby allies +0/+3/+2/+2 in buffs, which can be very nice for more defensive units.

Her Special and A slot are more about using her offensively and don't matter quite so much, though she has the Resistance to counter blue mages and utilize Iceberg while having the Speed to make the most of Swift Sparrow. Triangle Adept will likely be your safest bet and will help her to fall into the comfortable niche of TA dancers.

Being able to receive +6 buffs ensures that New Year Azura is absolutely a combat capable unit, despite her lower stat total. With this set, her Speed can be in the upper 40s, which helps her to double for a Luna or Iceberg proc, which will further add to her damage.

Iceberg will offer you a guaranteed +13 damage, whereas Luna will do more damage if your opponent has higher defenses- Luna is generally preferable except in niche cases, or if your Azura has a +RES IV.

Swift Sparrow supplements both of her offensive stats nicely, giving her an instant +4 to her impressive Speed and +4 to her previously-mediocre Attack power for a fast green nuke. However, you can also run DC here if you'd like to utilize her decent Resistance stat- with this, Quick Riposte would be ideal, as it helps her to take down fast ranged units who ordinarily she wouldn't be able to double, such as Nino, Delthea, and Linde. Emerald Axe is also optimal with a DC build so that she can reliably counter Reinhardt and other blue mages who may threaten your team.

Her Resistance is almost too low to be able to recommend Def Ploy, but if your Azura is +RES, it becomes a far more attractive option. Hone Fliers or your team buff of choice is also a good option to have, which will allow her to function as more of a hybrid support/damage unit.

Finally, her seal will help her to increase her Speed and Attack when initiating combat up to 44 (with +Speed boon and Speed forge). Alternatively, she can run Quickened Pulse alongside Glacies in order to proc it quickly during her first combat.

As the first flying dancer, Azura is previously uncharted territory. She boasts the same offensive stats as Shanna, with high Speed and low Attack, though her defenses are poorer. This makes her a fast green axe flier, which is a rarity in FEH.  While she should predominately be played as a support unit, her Speed and not-insignificant Attack allows her to duck into combat in a pinch and put in some work against blue units, particularly mages and dragons.

Don't let her lower stat total fool you, either- Azura is one of the only dancers capable of receiving emblem buffs, meaning that on a flier team she can potentially be defensively buffed +6/+6 to cover her weaker defenses, as well as offensively buffed (if you have another Hone Flier unit) to reach an ATK/SPD of 36/41 before weapon or IVs are counted. All of this together means that her combat capabilities are more than meets the eye if played on a team that can support her as she supports them.

Even if you aren't playing her on a flier emblem team, her mobility allows for significant control over the battlefield and she'll be able to uniquely assist your other units: not only can she passively buff nearby teammates by +2 Defense/+2 Resistance, and not only can she fly over forest or rocky terrain to dance her teammates, but she can also equip the Guidance seal, allowing for incredible team maneuverability on the battlefield.

Her decent Speed helps to prevent her from being doubled in combat, which helps to offset her squishiness

This also makes her decent to use offensively in a pinch, as she's more inclined to double her opponent than many other green fliers

Like all other Azuras, NY Azura has a decent res stat, which allows her to soak a little damage from blue dragons and mages

Azura will not be tanking much, nor is she capable of trading many blows. Her Speed may save her from being ORKOd by blues, but her defenses aren't going to give her any sort of sustain if she sees combat too many times

Her Attack leaves something to be desired at 30 neutral. While it's higher than some units, it's generally right on the brink of usability.

Default kit does not benefit her

NY Azura has no skills or weapon effects that benefit her as a unit- everything she comes with revolves around supporting her teammates.

While this makes her a great out-of-the-box support unit, it offers her poor utility in terms of being a standalone fighter 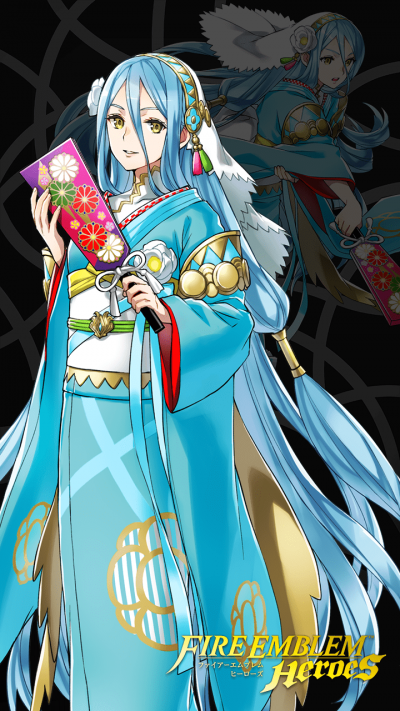