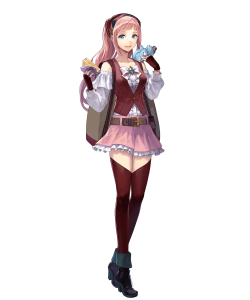 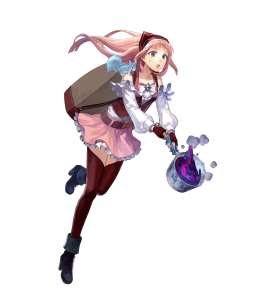 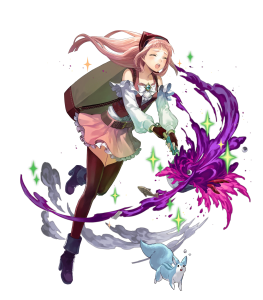 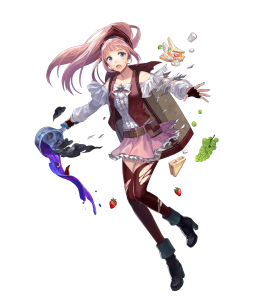 This build aims to capitalize on Picnic Felicia’s ability to perform as a potent generalist capable of functioning as an exceptional wall against a wide breadth of foes, a role which she can fulfill exceedingly well thanks to her status as one of the few armored units that can reliably perform follow-up attacks in both phases without necessitating the use of Bold or Vengeful Fighter. This provides her with the flexibility of taking Special Fighter as her chosen B slot skill to further capitalize on her unique playstyle, effectively granting her the ability to control the course of any battle in her favor. Given Special Fighter’s inability to actually guarantee her follow-up attack, however, a Speed Asset (alongside accompanying team support to her Speed stat) can be considered ideal here, though an Attack Asset remains a strong option as well to increase her damage output outside of Special activations.

Although Picnic Felicia can easily accumulate enough Speed such that skills such as Bold Fighter are typically unnecessary, she can still make good use of a standard mixed phase set-up to gain the ability to break through Wary Fighter and other similar skills that would have otherwise prevented her from performing a follow-up entirely; this also lets her focus strictly on maximizing her damage output. Accordingly, an Attack Asset makes for her best choice of IVs here, however, one still has the option of increasing her Speed stat instead to provide her with an additional boost to her survivability.

A character commonly known for her carefree and clumsy nature, Felicia makes her seasonal debut dressed in a disarmingly cute outfit alongside her older twin sister as they prepare to go on a picnic. Despite joining the already bloated pool of green armored units, Picnic Felicia somehow manages to distinguish herself from her competition, showcasing her own unique take on the standard formula for an armored unit.

Statwise, she’s incredibly well-rounded. Boasting fantastic mixed bulk and high Speed, Picnic Felicia is surprisingly durable and well adept at tanking damage — a characteristic that is only enhanced further via the power of her unique personal weapon, Eldhrímnir. In addition to inflicting effective damage against beast units and granting her a flat +3 Speed, Eldhrímnir allows her to inflict an in-combat Atk/Spd debuff upon her opponent based on the difference between their Resistance stats, providing her with a powerful mix of offensive and defensive utility. When combined with her complementary base stats, Picnic Felicia has the ability to perform as one of the few armored units who can fully utilize Special Fighter in both phases to attain astounding combat prowess and easily control the course of any given battle. Moreover, as an armored unit, Picnic Felicia also has access to class-exclusive buffs, further solidifying her ability to perform as a capable combatant.

Although she does have her own fair share of weaknesses, namely her poor mobility and weakness to armor-effective weaponry, these are not problems exclusive to her and are ultimately not of enough significance to detract too much from her usefulness. Overall, while not necessarily anything gamebreaking, Picnic Felicia makes for a welcome addition to the game, whose unique playstyle centered around maintaining high levels of survivability allow her to fit well into any team composition looking for a capable defensive generalist.

In addition to granting her a flat +3 Speed, Eldhrímnir enables Picnic Felicia to potentially benefit from a massive boost to her overall survivability and proficiency at utilizing Special Fighter, complementing her statline incredibly well. Furthermore, albeit somewhat limited in usage, Eldhrímnir’s ability to deal effective damage against beast units is a solid additional bonus that grants her a distinct niche in comparison to the rest of the cast.

Picnic Felicia’s status as an armored unit is vastly significant in that it allows her access to the highly coveted Fighter skills, all of which she can make great use of to elevate her overall potential substantially. Moreover, this also lets her take advantage of class-exclusive buffs and a hefty boost to her BST.

Like all other armored units, Picnic Felicia suffers from limited mobility and is unable to naturally move more than one space at a time. This can prove to be a rather debilitating weakness should one be unable to provide her with the prerequisite support necessary to mediate it somewhat, detracting heavily from her overall ease of use.

Picnic Felicia’s status as an armored unit also causes her to have an inherent weakness to armor-effective weaponry and will struggle immensely against foes wielding them.

Looking to capitalise on her speed and Special Fighter, double Atk/Spd Bond puts mine (+Atk +1) at 60 attack and 52 speed before buffs and her axe's in combat atk/spd debuffs which, given her high resistance, is likely to be in effect. If she doubles, which she likely will, Glacies procs for massive damage. Swapping out an Atk/Spd Bond for Atk/Def or Atk/Res would also be good if she has speed support.

Having Slaying Axe+ on the Felicia gives the opportunity to hit aether every turn in both player and enemy phase, mixed with distant counter and special fighter, she is a force to be reckoned with, you can refine the axe to what fixes your need. The assist skill, sacred seal, and c skills are all flexible also, and armor buff skill can be used instead as well, if used on an armored team, also distant counter can be replaced with a bond skill if needed for lower investment purposes.

A build that Felicia can maximize her stats. Because of effect of her weapon - Odd Res Wave can utilize it to be 41 ( Neutral) to reduce stats of other heroes - also Distan Counter is a good skill too - help her deal with range unit because of her balanced stat.
In other hand, Special Fighter is her skill and it has already too good as you guys know. Quick Riposte 3 just make sure that Felicia will gurantee make follow- up attack on Enemy Fase or you can replace that with Distant Def or Close Def just OK. Hope you guys have a nice day