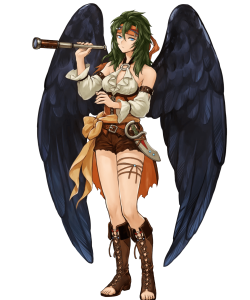 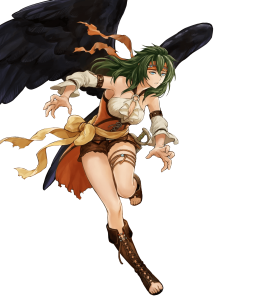 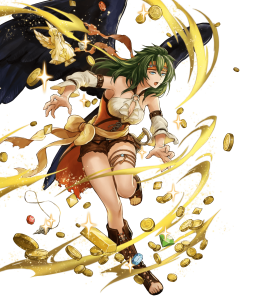 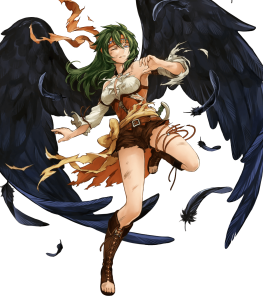 34 Attack and 40 Speed are quite strong, enabling Vika to become a potent damage dealer with Skill investment and/or support.

With a whopping 40 Resistance, Vika can typically shrug off magical attacks as long as they are not Flier-effective. This also plays well into her personal weapon and activating Skills such as her native Sabotage Atk to support her team.

As with all other Beasts, Vika has a personal weapon, hers being her Ebon-Pirate Claw.

Overall, Ebon-Pirate Claw is solid! Assuming all effects activate and are not neutralized or reversed, Vika effectively gains +7 Attack, +5 Speed, +8 Resistance, and +1 Movement, in addition to granting herself and all allies an additional +7 Attack thanks to the Sabotage Def/Res effect.

Ebon-Pirate Claw’s transformation bonuses of +2 Attack and +1 Movement are thanks to Vika’s status as a Beast. Because of her Flier status, Vika also has access to strong Skills such as Dive-Bomb, S/D Near Trace, and Spd/Def Rein to increase her combat consistency and proficiency. The ability to use and make use of Skills like Hone Fliers and Goad Beasts further boosts Vika’s combat or supportive capabilities as well.

Jack of all trades...

Vika’s Ebon-Pirate Claw innately makes her a jack of all trades--that is, she can both fight and support effectively, making her a flexible unit that can be built in a particular way if specialization is desired on either end of the spectrum. Alternatively, she can juggle both roles to become a good hybrid unit.

Unfortunately, Vika faces fierce competition both combatively and supportively, with her ability to potentially do both simultaneously being too weak to justify fielding her over other units. Combatively, Vika is outdone by most other Beasts (especially fellow Beast Fliers such as Tibarn, Pirate Tibarn, and Pirate Naesala), while supportively, she is weaker than Reyson and Leanne, common Beast Fliers that provide a refresh through their Sing Assist and healing through their Heron Wing. Note that this is competition from just Beasts; there are myriads of non-Beast units that compete with or outperform Vika as well.

41 HP and 17 Defense leaves Vika with only 57 physical bulk, making her vulnerable to being OHKO’d by many physical enemies. It doesn’t help that Ebon-Pirate Claw only grants Vika +5 Atk/Spd/Res for...whatever reason. I guess Pirate Vika, Guinivere, Summer Ashe, and the Sealed Falchion users are in the same pirate ship when it comes to that.

Vika’s combat capabilities are limited by her inability to use Pegasus Flight and Flow Refresh, both of which would have significantly improved her combat consistency and survivability. Being barred access to Null Follow-Up, Null C-Disrupt, and the Spurn family of Skills hurts Vika as well, along with taking effective damage from Flier-effective weapons such as Winds of Change, Excalibur, and Bows.

I done goofed
Let it be known that today Peaches fucked himself in terms of resource management…
What vibes do you give? (FEH edition)
Heloo people on there I saw some time ago a meme about people telling you what vibes…
"I'm going to dance the living shit out of you" - The omega dancer Berkut +10 waltz dancing on enemies graves
Is he shit as a offensive unit, will I change his build back to a support dancer, is…
Oops all blue
Today I saw the fact that I have a ton of blue units Basically it’s blue>red&gt…
Who Should Eat The Flame God's Carcass?
Got a Muspel and he’s gonna die but which little dragon girl should eat him? Nowi …
Read More