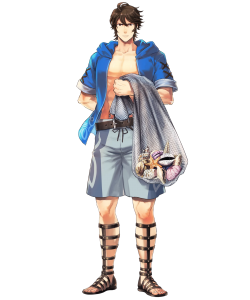 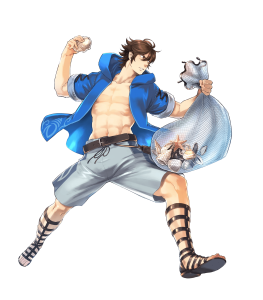 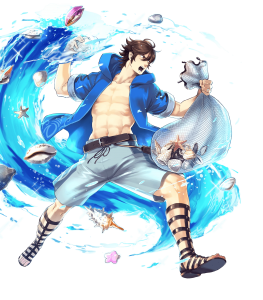 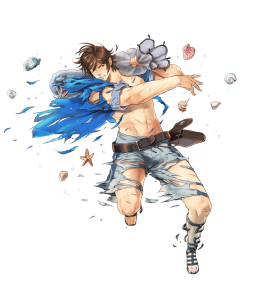 Summer Frederick has a somewhat balanced stat spread, with all of his stats except Resistance giving him some niche.

Sovereign of the Beach (Offensive)

A primarily Player Phase offensive dagger build. With all skills combined, Summer Frederick will reach a respectable 48/43 Atk/Spd on initiation. While Lethal Carrot is preferred to let Summer Frederick fire off absolutely scathing Bonfire procs, Barb Shuriken (or a Kagami Mochi if one is feeling fancy) is a great alternative for trying to get his Specials out as quick as possible. As a budget option, his native Seashell can be kept to increase his initiating Atk/Spd to 50/45, but only for his first combat (or continuously, if he carries healing support or Renewal).

Draw Back best lets Summer Frederick assist with positioning while keeping himself safe. However, if Summer Frederick has an HP bane, which sets his HP to 38, Ardent Sacrifice will instantly put him into Desperation range with little effort, so long as no merges or blessings push him back over 40. Though of course, avoid Ardent Sacrifice if utilizing Seashell as it will disable the weapon's effect.

Swift Sparrow is the favored A slot skill, granting him some very welcome stats when initiating. Life and Death can push his Atk/Spd a point further at the cost of his defenses, wherein Summer Frederick can happily switch his Special to Luna for greater damage on tankier targets. For other cheaper options, pick Darting Blow if still not entirely convinced by his Speed, particularly if lacking a +SPD boon, or Fury to maximize his initial bulk plus give him a safe path towards Desperation.

Desperation will let Summer Frederick easily take down squishier foes after he gets himself in range, which is fairly easy for him to do vs bows, Distant Counter units, or weaker mages thanks to his nice Defense and HP stats. If opting more towards Attack than Speed, a breaker such as Swordbreaker or Bowbreaker will guarantee matchups vs the fastest units of those classes, such as Mia or Brave Lyn. Renewal has decent synergy with Seashell if one chooses to keep it, as it may allow him to utilize its effect multiple times.

When it comes to his C slot, for the selfish option, Threaten Spd is fairly easy skill to afflict onto melee enemies that he can freely bait into its in range, and can go a long way to both guaranteeing his doubles and keeping him safe. Any other Hone or Spur can work just fine though, based on the support needs of his teammates.

Saltwater in the Wound (Assassin)

A targeted assassin build that aims to make use of Summer Frederick's good Attack to seek and destroy either mages or infantry. Kitty Paddle is the stronger option, while Poison Dagger is quite a bit more accessible. If using Kitty Paddle, taking a -DEF bane lets him keep his one-hit magical bulk at a usable 58 which can be a lifesaver in the event he finds himself needing to take a single hit from a mage.

To make sure his Special is available as often as possible, Glimmer or Moonbow is used to benefit from the low 2 cooldown. Glimmer scales fairly great when used vs enemies his weapon is effective against, whilst Moonbow is still quite useful and may help him salvage combats against other types of enemies.

Death Blow will provide him with maximum killing power. Life and Death comes close, and remains active on Enemy Phase, but at the cost of his defenses. Fury can give him the bulk needed to fight against enemies that can survive past the first hit.

Vantage is a powerful B slot, as enemies that survive a round of combat (for example after a one-hit trade) will probably be in range where they will end up killing themselves as soon as they try to attack. When in range, Summer Frederick can easily bait and kill multiple squishy units at a time. Cancel Affinity is an alternative to give him a fighting chance vs mages running Triangle Adept in tandem with a Raven tome, but it is quite situational, and won't be needed for the majority of matches.

If Summer Frederick finds himself in a tough spot, it is usually going to be when fighting a higher powered mage that he cant take down easily. To alleviate this, a skill that boosts his ally's Resistance like Drive Res or Fortify Res can allows an ally to more easily soften that enemy for him. Of course, virtually any team support skill works as needed.

A Defense focused set that aims to maximize his physical tanking power and retaliate with deadly Ignis procs. A Defense refine and boon improve his staying power and ignis damage, though Speed boosts can still be used to attempt to deny enemy doubles.

Close Counter lets him bait and retaliate vs melee foes as well as ranged. Barb Shuriken (or Kagami Mochi) pairs perfectly with Quick Riposte and a Quickened Pulse Seal, letting any initiating enemy be greeted with an Ignis. While not as powerful, Bonfire can be used if the Quickened Pulse Seal is unavailable, or if using a Smoke Dagger or Seashell instead. Close Def is the strongest backup Seal, which further increases his bulk vs melee targets, and pairs great with Threaten Atk, which can be used to easily weaken melee enemies heading near him.

As an alternative, Guard can be equipped to stop any enemy Special attacks, with Quick Riposte instead being used in the Sacred Seal slot. His native Seal Atk/Spd is also a worthy budget option, working in tandem with his dagger's debuff to cripple any foe that remains alive for round two.

Summer Frederick is a seasonal dagger unit who is, when compared to other daggers, by all means relatively average. He has a fairly decent Attack stat, though trails slightly behind units like Sothe and Kagero. He has what seems like a workable Speed stat, but it is truthfully one of the lowest among daggers and not super impressive compared to units like Legault or Kaze. He has a pretty beefy Defense stat, though not quite at the level of tanks like Saizo. Essentially, he falls into the realm of jack of all trades—by no means bad, but not inherently a specialist in any category. Unfortunately, as dagger units are often considered rather unappealing to begin with, it is rather hard to find room on a team for such a unit that lacks said specialization.

Thankfully, the buffs given to daggers through Sacred Seals and the weapon refinery, as well as a multitude of new skills, have given Summer Frederick some much needed opportunity to push his stat spread in multiple directions. His Attack, Speed, and Defense can all reach some welcome levels when invested into, with Summer Frederick's only unfixable flaw being his inherently poor Resistance. As long as one keeps wary of such attackers, with investment he can overcome his average stats and prove to be a fair summertime ally.

Good mix of Attack and bulk

Summer Frederick's base Defense of 28 is on the upper end of dagger units, who tend to be paper frail, and is paired with a decent 40 HP. While units like Saizo and Matthew have slightly higher values, at 33 and 30 Defense respectively, Summer Frederick's 32 base Attack is a very welcome step up from their poor base Attack stats of 29 and 25.

However if aiming for Summer Frederick's absolute peak potential, newer daggers such as the Lethal Carrot and Barb Shuriken offer some hefty competition, if one has them available.

While most are good, none of Summer Frederick's stats are great. His highest non-HP stat, Attack, sits at just 32. For maximum effectiveness, he desperately needs to be tailored to a role, often with some expensive inherits.

Summer Frederick seems to suffer from a severe case of bibliophobia, retaining the original Frederick's crippling weakness to spellbooks. He both lacks the Speed and the Resistance to take hits from them in most cases.

As a seasonal exclusive unit, it is very hard to merge him for stat boosts, or fish for optimal IVs. 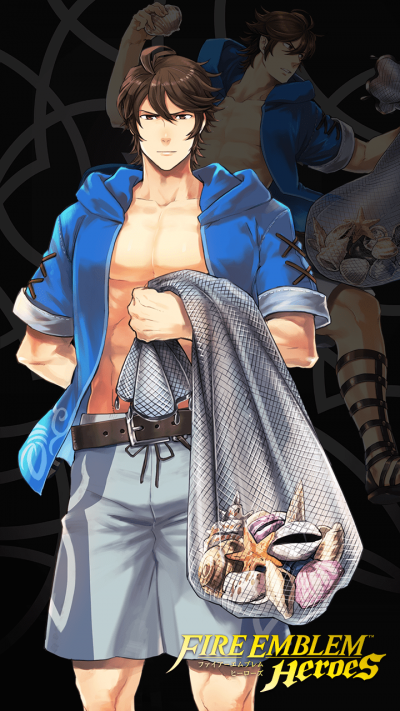