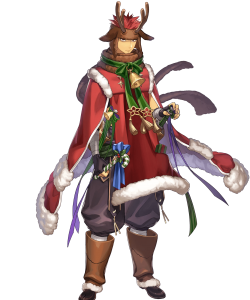 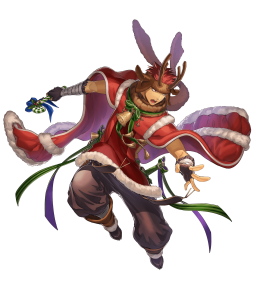 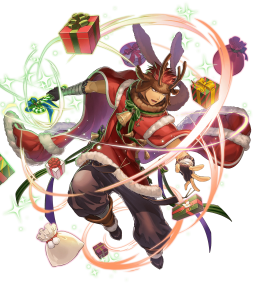 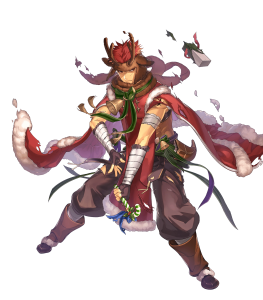 Winter Jaffar boasts great innate firepower and comes packed with a formidable offensive statline of 35/37. This imparts him with a solid baseline for dealing damage and both performing and denying follow-up attacks; this attribute lends itself well to both offensive and defensive roles.

Winter Jaffar’s durability is quite good as well. With 75 physical bulk and 71 magical bulk, he has very little trouble in directly taking on most forms of sustained offensive pressure, especially when provided with the appropriate support and investment.

Winter Jaffar’s armored status is an immense boon in his favor and grants him access to several powerful strengths (such as access to class-exclusive skills like the infamous Fighter skills and a sizeable boost to his BST), further cementing his position as a strong asset at one’s disposal.

Thanks to his innate access to a wide array of different weapons as a dagger user alongside his well-distributed statline and armored strengths, Winter Jaffar boasts immense versatility and is flexible enough to lend himself well to numerous strategies.

Winter Jaffar’s innate weakness to armor-effective damage proves rather debilitating given the increasing commonality of sources of such damage in enemy team compositions. Should he deployed on maps where it is present, caution must be exercised to prevent him from being taken down preemptively, or one may simply be better off slotting another unit in his stead.

As an armored unit, Winter Jaffar also faces the inability to move more than one space at a time. While this is a much lesser concern for him than his melee contemporaries thanks to his ranged status, it can still make him rather unwieldy to utilize (especially when built for an offensive role) if one does not have access to skills (such as Armor March) that can circumvent this.

With his high Spd, Jaffar can pull off a great true damage build - using his amazing statline for a player-phase build instead of being the typical enemy phase armored unit

Red-Hot Ducks+ allows Jaffar to deal +7 true damage on top of his already great Atk stat, using his Spd as damage output. Lethal Carrot+ works too, although you get slightly less of an overall damage boost

Rally Up Atk+ is for scoring purposes, and can be inherited from HS!Elise alongside Red-Hot Ducks+. However, Reposition is best for practical use

Ruptured Sky is the best option for 2-charge specials which are guaranteed to trigger with the help of Flashing Blade 4. Glimmer and Moonbow are also great options, although they score less in Arena

Panic Smoke 3 is inherited from Thrasir along with her A skill, but can be easily replaced with Spd Smoke 3

Brazen Atk/Spd 3 Seal maximises his Atk and Spd stats, and will trigger when he drops below 80% HP alongside Daring Fighter 3. Swift Sparrow 2 is a great Seal option otherwise

First off, this one isn't *mine*. It's an EXCELLENT build by GameFAQs user "Kaze_no_Ou" but I didn't see anything similar posted here and I really wanted him to get credit for it. It's a fairly cheap build (Cleaner might be a little tough if you're out of Legault or Tethys, and Swift Sparrow is always in high demand) but otherwise it's fairly simple. Jaffar has excellent BST and with a better weapon hits like a truck. Armored Boots and WoM let him hop around the battlefield while SS2 and his naturally high speed (for an Armor) mean that he's got a better chance of doubles. Since I had some Limited Compile Codes burning a hole in my Summoner's Robes, I used the Kagero manual to give him both Lethal Carrot and Glimmer at the same time since I lack access to Cleaner right now. It's honestly working better than I expect and with a way to charge his special a little quicker (Like Brave Lucina or a Duo Skill), he's going to be dealing a very solid chunk of damage to whatever he hits.

Minty Cane+ allows for Jaffar to run a bit of self sustain. Beneficial refines include +spd or +res, as the former makes it harder to double, and the latter rounds out his statline.

Moonbow, with a 2 charge, synergizes well with VF in allowing Jaffar to charge up his special through enemy phase, and release it on the counterattack. Twice, provided the enemy manages to survive the hit and on top of that double Jaffar.
A healing special is somewhat redundant if running Minty Cane+, but a Luna Special can be considered if running QR, depending on how often you expect foes to double Jaffar.

Def/Res Bond in the A-slot and seal allows Jaffar a +10 in both defensive stats, making up for how IS optimized Jaffar for offense.

Vengeful Fighter (Replaceable with Quick Riposte for a cheaper investment) allows Jaffar to heal up to 10 health on enemy phase, and retaliate with a charged Luna with the second attack. If follow up is denied due to enemy's skills, Jaffar's Moonbow will still be ready for the counter, or if running Luna should be ready on the player phase.

Speed Smoke allows Jaffar's 37 speed a cushion against faster units in the game. Preferably triggering during player phase (but still triggering on enemy phase), this skill will enable Jaffar to prevent close enemies from easily doubling him due to speed.

His kit is already geared towards self-sustain, so I made him a field medic. You can give him Sol or Aether for even more sustain, but his attack is low so I think Luna gives him the punch he needs to also carry his weight in combat. The downside is that you'll need to keep your team close together in order for him to be able to hand out health. As a result of this, your TT score will suffer. Armored Boots isn't a great fix unless you have another healer, because he'll usually reach full health after he hits an enemy, and Armored Boots requires him to be at full health at the start of the turn. Pairing him with a unit with Armored March is ideal.

Be sure to give a defense refined Minty Cane+ and SS for maximum effect. Def refine + SS= fairly tanky Jaffar. SF3 + QP seal= Jaffar can proc Luna on the first foe he attacks as long as he doubles. Atk/Spd Push 4 + Minty Cane= Jaffar will be able to kill more foes thanks to the extra atk/spd, all the while being able to heal up to a maximum of 10 hp, which would allow Jaffar to stay within the hp threshold of SF3 and Atk/Spd Push 4 more often.