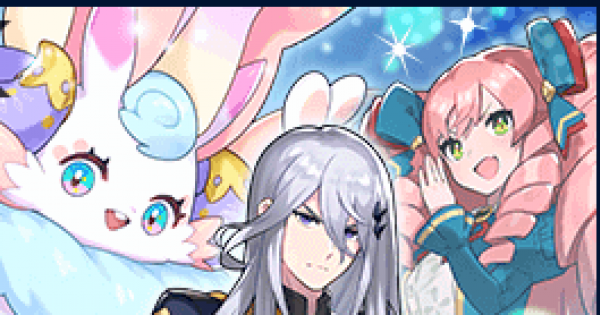 Disclaimer: The opinions below are written by GamePress and do not actually reflect Nintendo, Cygames, or the fairy Notte's and Mym's opinions... probably. If they somehow do, it's merely coincidental!

What? Another one of these? Fine. I'm going on vacation.

Darling! It has been ever so long since Dear Notte asked me to do one of these for her! Let's see what wonderful goodies we have in store on this banner!

What!? A Water banner!? That's a dreadful element! Why on earth would you have a Water only banner?

Good news, everyone. This banner isn't as bad as the Light banner! But terrible news everyone, it's still really bad.

The main thing this banner has over the Light banner is that aside from Gala Elisanne and Hunter Sarisse, neither of whom are as dominate in Water as they once were, Water is not an element dominated by largely limited Adventurers. Indeed, arguably one of the best Water Adventurers has always been Elisanne, who no doubt will come to dominate once she gets her long overdue spiral. Still, there are good Adventurers on this banner. Xander and Lily both just got their spirals, and Xainfried's has been out for a good while now. All of them are viable for Agito, though it seems like Xainfried is probably the best of the bunch.

Even non-spiraled Water Adventurers have some potential, especially the two chefs. Valerio is strong and has a good kit, while Mitsuba is straight up one of the best Adventurers in Water and has a place in cheese and traditional comps. The newer Eugene is also strong, and worth using, though after him it more or less goes rapidly downhill.

Looking beyond the top rarity, your best bet is definitely Karina. Her spiral has made her into a monster of a pirate captain, and if I were to pick someone to spiral on the cheap out of the new batch, she is certainly the one to do, potentially beating out both Lily and Xander in absolute terms depending on how you compose your team.

Here's the rub though: Why the heck would you pull on this banner? Unless you are brand new and basically have no water roster, there is no need to go in here. Yes, this is the better banner between this and the Light Banner, but we just came out of a gala. THAT was the time to pull, this is not. Plus, while you COULD get someone good like Eugene or Lily, you could also get a dud like Lazry or Laranoa or  Save your wyrmite.

Verdict: No. While there are viable Adventures you can get, the lack of focus means it's a crap shoot and you're just as likely to walk away with a whammy as a prize.

Hmph. Despite what dear Mercury might tell you, it's an objective fact that Water Dragons are in every way inferior to Flame Dragons in general, and me in particular, darling. Why, just one night with me, and dearest Euden would forget all about that silly sister of his forever. Plus, then everyone would quit making those vile jokes.

Once again, better than Light, as Water's best dragons are not limited, save for Halloween Maritimus, who is somewhat outmoded anyway. But there are just as many stinkers in this pool as viable dragons. Let's divide it up: the good dragons are, from best to OKist, Gaibhne & Creidhne, Siren is tied with Leviathan, and Nimis. The bad dragons are Poseidon, Simurgh, Kamuy, and Styx. Keep in mind, Gaibhne & Creidhne are leaps and bounds ahead of all other Water dragons, and Nimis is barely decent. I really, really would not want to end up with Kamuy or Simurgh, who just plain are not usable on anyone these days if you're serious about end game content.

Verdict: No. The odds are far to low that you get something you actually want.

Only Water units in the pool.

Final Verdict: Save your Wyrmite.

Even if your water roster is barren, just wait a few weeks for a gala or limited banner, or even just a regular focus that has something you want. Agito isn't going anywhere.