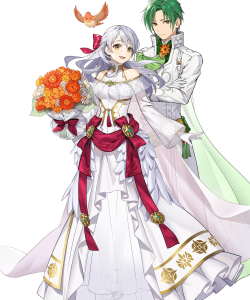 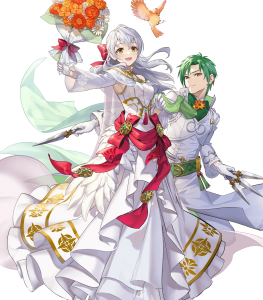 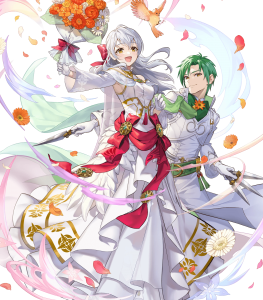 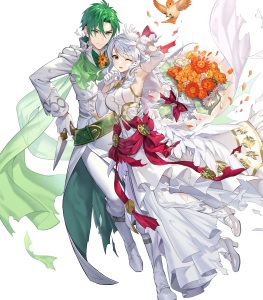 Zephyr with Streaks of Silver (Offensive)

Bridal Micaiah’s Joyful Vows is a very simple weapon but highly effective weapon, making her well adept at dealing damage through a passive Attack +3, an additional +6 boost her Attack and Resistance when buffed, and effective damage against armor and cavalry foes; its ability to negate her foe’s follow-up attack is also a solid bonus that helps mitigate her frailty. Furthermore, the activation requirement for its effect is extremely easy to fulfill, and Bridal Micaiah can even do it herself for a turn by activating her Duo Skill.

Bridal Micaiah benefits from access to an exclusive Duo Skill, with hers being exceptionally potent. In addition to debuffing any foes within three columns for -7 Defense and Resistance, it also applies Dominance on herself and any allies within the same radius. This translates to a massive boost in burst damage potential to herself and any ally affected, which lends itself to various strategies. Furthermore, as a Duo Hero, Bridal Micaiah has fantastic scoring potential in Colosseum modes as her BST will be counted as 185.

With a base Attack of 39 (and a four-point Asset in the same stat), Bridal Micaiah can hit incredibly hard and leave huge dents in enemy HP pools if not outright OHKO them with a single blow; this is only highlighted further by the damage-increasing properties of her PRF and Duo Skill. Bridal Micaiah’s 38 base Resistance is equally impressive and offers her great magical durability, as well as the ability to reliably use Specials that scale off it.

Bridal Micaiah’s colorless typing is rather advantageous to her as it guarantees her neutral matchups against all foes (with the rare exception of units wielding a Raven effect), which allows her to be a much more consistent counter to enemy threats compared to her direct competition.

Her status as a mage flier grants her excellent mobility and range as well as access to class-exclusive buffs. This also enables her to equip a variety of movement-based skills such as Guidance and Ground Orders to further assist her team.

Thanks to Bridal Micaiah’s vast array of strengths at her disposal, the young maiden and her companion boast a surprising amount of versatility, as she has the ability to excel at a variety of different roles.

Being a flier comes attached to the detriment of having horrible skill availability, particularly in terms of B slot skills which detracts from Bridal Micaiah’s potential. However, the sheer capabilities of her exclusive skills does help offset this to a significant degree.

Maintaining her signature combination of mediocre HP and abysmal Defense like her other iterations, Bridal Micaiah is quite susceptible to incoming physical damage and is unlikely to survive more than a single hit from a physical hitter, especially since she must rely solely on her stats due to being colorless.

Bridal Micaiah faces a serious weakness to archers as a flier, so such foes must be handled quickly to safeguard her longevity.

This build is an attempt to optimize Micaiah's support utility, particularly for buffing a carry unit. Micaiah loses a consistent way to proc her weapon, and her prf assist is dropped entirely, but now she functions as a smite bot that can also support with her duo skill.

Atk/Def Gap gives a way to buff allies at any distance, which is important since her allies will also be getting moved by Smite for Spd/Res Link to proc and grant a total of +5/+6/+5/+6 stats. The exact stats in each skill can be adjusted according to your intended carry unit. Atk Opening is a fine alternative for budget builds, just beware that it can be sabotaged by an atk debuff.

Chill Atk is used for an easy source of debuffs when her duo skill procs. In AR, you can expect a Mila or Plumeria to already be applying debuffs, but a chill skill serves as a nice failsafe against high res units.

There isn't much to change with her A slot, her native Atk/Res Push works for the few times she has to fight. Fury can also be run to soak chills, although this build's focus on buffs will make chill soaking close to impossible.

How long should an investment pay off?
We know that units become relatively weaker over time due to powercreep. Why is it ok…
Sacrifice L.Chrom +spd!?
I decided, contrary to my calculating style, to gamble on blues on the 8% with about…
"Do you think god stays in heaven because he too lives in fear of what he's created?" // The Duo that defiance Death and Fate itself// A Zelgius & Hardin Post-Refine Showcase
The day has finally come. I’ve waited for this so long and finally it happened:…
NY Keaton Build suggestions
Hi guys I build a NY Keaton for arena so I want that you tell me if I need change…
Ayra IV question
What IVs does my Ayra have?? Thanks in advance. Screenshot_20210506_221103_com…
Read More