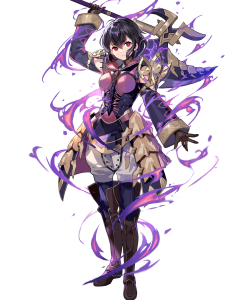 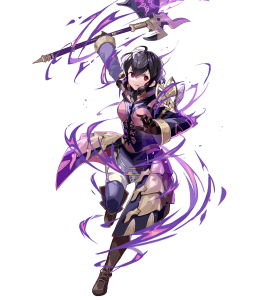 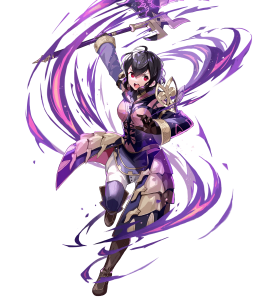 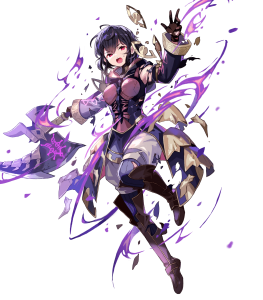 How do you do, fellow Awakening kids? (Galeforce)

Passive B: Wings of Mercy / S/D Near Trace / Dive-Bomb

Axe of Despair is a fantastic weapon, providing the Slaying effect (Special cooldown -1), as well as debuffing the foe’s Atk and Def by 6 and providing a variety of effects based on the sum of Morgan’s buffs and her foe’s debuffs as long as her HP is at least 25% of her max at the start of combat. With a total of 5 buffs and debuffs, the foe cannot follow-up, with 10 she gets a guaranteed follow-up, and with 15 their Special charge is slowed. This is a relatively easy condition to activate in most circumstances, especially when using Atk/Def Menace.

Morgan’s base 39 Atk is quite high and allows her to do great damage, OHKO or 2HKOing many units before they can counter.

Morgan’s great base 41 Def and good base 40 HP and 35 Res allow her to take all kinds of hits effectively.

Morgan’s status as a flying axe unit allows her to ignore terrain movement penalties and use great exclusive skills like Dive-Bomb and Atk/Def Rein.

Flying-effective weapons such as bows deal 1.5x damage to Morgan, making her much easier to take out unless she is using an effect such as Iote’s Shield that removes this weakness.

Morgan’s base 17 Spd is terrible. While Axe of Despair’s follow-up shenanigans allow her to get around this against many enemies, it means she is vulnerable in cases where they do not work, such as when fighting units with Null Follow-Up or units that cancel out her buffs and their debuffs. In addition, Spd-based damage reduction such as Close Call lowers her damage significantly.

Morgan’s base 2 Mov is average, but means she has trouble initiating on units with a high threat range. She can use skills such as Odd Tempest to somewhat mitigate this, but that comes at the cost of Atk/Def Menace, which is extremely useful for Axe of Despair.