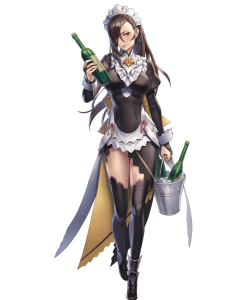 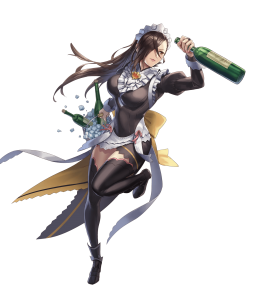 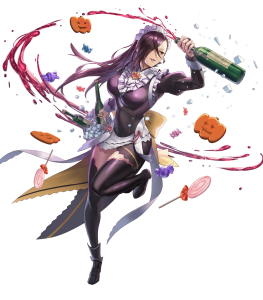 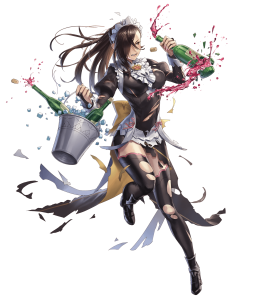 Kagero’s lopsided statline makes choosing her boons and banes an easy task. The best complement to her offensive prowess is an Attack boon. She also doesn't mind boons in her defensive stats, as they help her to take more damage and live longer. On the flip side, her Speed is already far too low to be salvageable, solidifying it as her best choice in a bane. Even with low Speed, she can double foes with skills such as Bold Fighter and Quick Riposte.

Halloween Kagero’s premiere offensive set is based around being an armored dagger user and sees her make use of a previously-impossible combination. Starfish, which has the effects of Desperation can be used with Bold Fighter to make Halloween Kagero incredibly deadly once under 75% HP.

The combination of Starfish and Bold Fighter is the key to this set, guaranteeing Halloween Kagero two attacks before the enemy can counter. She takes a +Atk refine to boost damage. Her choice of Specials comes down to Draconic Aura and Glimmer: The former is only usable with Quickened Pulse, while the latter should be used alongside a different seal.

Death Blow and Bold Fighter enable Halloween Kagero offensively, allowing her to deal increased damage, and charge Specials quickly. With Quickened Pulse she can activate a powerful Draconic Aura, but Brazen Atk/Res and Atk+3 are longer-lasting. Halloween Kagero will likely need at least one round of combat to activate Starfish, so choosing whether to strengthen her first combat or subsequent ones is important.

She should run Armor March when on an armor team but can make use of many C slot skills. Her base 33 Resistance makes her a naturally good user of Ploy skills. As for her assist skill, Rally Up Atk+ and Draw Back are two fantastic options, allowing her to strengthen allies or reposition them on the field.

Halloween Kagero is capable of running a decent defensive set that makes use of her great Defense and Resistance. Her status as an armored unit allows her to use Special Fighter instead of Guard, greatly accelerating her Specials. While this set is strong, it has problems with units who can delay Halloween Kagero’s own Special or survive a Bonfire.

Close Counter and Quick Riposte are the two most important skills, letting Halloween Kagero counter against melee threats, and score guaranteed follow-up attacks. Barb Shuriken is chosen for its Special acceleration property, and with a +Def refine, lets Halloween Kagero reach a respectable 35 base Defense.

The next defensive element of the set is Special Fighter: This allows Halloween Kagero to charge stronger Specials while remaining protected from her enemy’s. This can be replaced with Guard, but doing so won’t allow Kagero to charge Bonfire on her first attack. Glimmer is the preferred Special in this case.

She should again run Armor March when on an armor team, but this variant of Halloween Kagero isn’t as reliant on buffs, making Ploys the preferred option. As for her assist skill, Rally Up Atk+ and Swap are two fantastic options, allowing her to strengthen allies or give herself a pseudo-extra movement space.

Kagero’s second alternate form sees her don a maid’s outfit to serve beverages! Although her status as an Assassin might make one suspicious of her drinks, she uses a trusty dagger to dispatch enemies. Being an armored unit means that Halloween Kagero has the prestige of being the very first armored Dagger user. This makes her a unique unit among others, and one with considerable strength.

A cursory glance at Halloween Kagero’s stats reveals an excellent spread that prioritizes Attack and her defensive stats while sacrificing Speed. Kagero does not mind this, as she can force follow-up attacks with skills. Being unique in weapon and movement type, it is tough to compare her to other units. Her closest relative might be Halloween Henry, who trades Attack and Defense for a considerable Speed increase and some Resistance.

Halloween Kagero is a unit with significant strengths and very few downsides: She has all the tools in her kit to succeed in an offensive capacity, making her an incredibly deadly unit. Her only true weakness is Speed, but even that can be mitigated with the right skills. Halloween Kagero’s restricted movement is offset by her ranged capacity, and she even has the option to make use of Armor March. Like most of her armored brethren, she stands as one of the strongest units ever released.

Halloween Kagero’s gargantuan 38 Attack is noteworthy among units, being unparalleled amongst ranged units. Although she can’t run a Brave weapon and suffers from daggers’ reduced weapon might, her Attack stat more than makes up for this deficit. It is almost unfair to mention the debuffing qualities of daggers, as her opponents will not live long enough to have their stats reduced. A follow-up attack from Halloween Kagero is almost certain to KO units that don’t have a type advantage on her.

Thanks to being an armored unit, Halloween Kagero enjoys a higher stat total than most other ranged units. She’s got a great defensive stat spread of 41/32/33, allowing her to easily soak up damage from neutral units. Her high mixed defenses means that refined breath weapons wielded by dragons have no weakness to latch onto. While her low Speed means many units score follow-up attacks on her, she can abuse attack order on her offensive set to circumvent this issue.

Halloween Kagero’s stat spread leaves her Speed lacking. At only base 21, she relies on skills to get follow-up attacks which is a problem for her defensive set. However, Halloween Kagero can use Bold Fighter when attacking to hit twice and provided she 2HKO’s the opponent, they will only ever get one chance to damage her. For these reasons, her low Speed is a weakness that can be easily overcome.

Compared to flying, infantry, and cavalry units, Halloween Kagero can only move one space per turn. This limits her offensive reach and is arguably her biggest weakness. Despite this, Halloween Kagero again has the tools to patch her weaknesses. Armor March or Armored Boots give her an additional square of movement (although Armored Boots will not work in conjunction with the Starfish due to HP thresholds). At the worst, she can rely on a Sing/Dance user or skills like Reposition to help her get around quicker.

This build actually uses a barb shuriken, nut for some reason this program won't let me.

Basically, the idea is to get hit into brazen range, and then have 62 attack at neutral. Bold fighter and barb shuriken lets her proc draconic aura every combat, and kill basically everything.

Replace Cloud Maiougi+ with Sky Maiougi+ to achieve great damage against armor. Along with the rise of dragons being armors as well, Sky Maiougi+'s value increases. Making it one of the best daggers for arena!

The combination of Death Blow 4 and Bold Fighter turns Halloween Kagero into a monster that rivals Halloween Jakob. While lacking the advantages of being colorless and a brave weapon, Kagero has access to hate daggers (anti-cavalry, anti-dragon, and anti-armor). Kagero will destroy any unit which her weapon counters, especially with drives and her Even Atk Wave active.

She sits at a comfortable 35/36 for her defenses, and having a +def IV is interchangeable with her weapon refine.

For those on the fence about a Close Counter build (or they already foddered off their free Takumi), this build takes out +def Myrrh's in arena pretty neatly, while offering utility and bulk coverage. Sturdy blow offers better use over Mirror strike, as you'll be facing physical units with DC more often these days.

Need to change so all daggers are inheritable. Has a rogue dagger + with either a def or res refine. Def and Res are interchangeable boons depending on the use of her