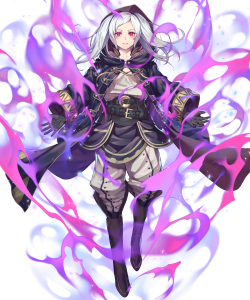 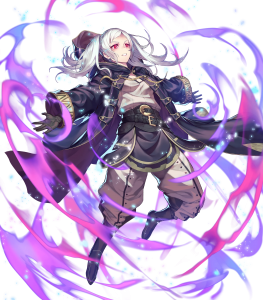 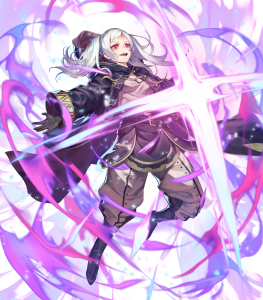 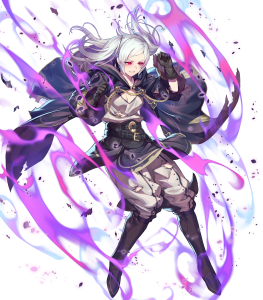 Legendary Robin is a colorless dragon flier with a Distant Counter weapon who neutralizes her own flier weakness. On paper, she already sounds amazing - with very few direct counters and weaknesses, she can provide unmatched utility in a flier composition, as well as great synergy and movement buffs in non-flier compositions. Colorless fliers are still rare and despite her Legendary status, Legendary Robin is owned by many summoners due to the sheer number of reruns she's had.

Legendary Robin's stat spread is very balanced, with no immediate dump stat and all of the rest of her stats being decent to middling. While this limits her from minmaxing, it allows her to be a solid all-rounder on her team, which matches her colorless typing.

Though being the first colorless dragon in the game is an interesting novelty and does give her a neat defensive niche, offensively it isn't doing her any huge favors. While being a colorless unit does spare her from a triangle weakness, it is not particularly difficult to play around, so being denied a triangle advantage for her to abuse herself is probably a bigger loss than gain, particularly when considering her low 32 Attack.

Legendary Robin's stats were average and balanced at the time of her release in 2018. Several years later, her age is definitely showing, as her stats are hardly competitive with newer units without significant investment. With little help from her prf or her prf skill, she finds herself in the unfortunate position of just not having enough stats to be competitive, especially without color advantage.

This build focuses on building Grima's ATK and DEF stats to create a tanky and fast flier that can be hard to double and hits hard due to her being colorless.

Chill Spd 3 is used to avoid doubles, and even give Grima the chance to double other quick units.

Blue Flame can be changed for Moonbow or Bonfire, however due to Grima being colorless, Blue Flame can essentially deal +10 or +25 true damage, and the SP cost is nice for arena.

The vanguard of my Fliers team, and also its shield. She gets both the Fortify/Hone buffs from two other members and promptly proceeds to wreck house.

With a Speed boon, Dragonflowers, and her merges, she reaches 43 Spd, which hits 49 when the Hone Fliers buff is applied, allowing her to easily double enemy units.

She’s also monstrously tanky with a Fortify buff, and once her Vantage/Brazen combo is active she’s terrifying to try to hit — although with such high defences on Enemy Phase, units often struggle to get her down that far unless they’re wielding an anti-dragon weapon. Even if someone manages to take her out, it’s a Pyrrhic victory at best because her assailant is usually so damaged that her teammates can easily finish the job.

Build for AR defense. Skills are self-explanatory: get her below 75% and only few dare touching her. Would appreciate buff from atk wave or atk tactic.

(Dark Paladin Grima/ Death Spiral Grima) This build extends Robin's natural bulk by adding recovery options while simultaneously crippling opponents. Seal Def/Res 2 ensure that any enemies who survive a first round of battle will have a hard time surviving the next. At the same time, Atk & Spd Smoke 3 reduce nearby targets' ability to deal any significant damage, let alone doubles, and also allows Robin to double counter most enemies. Due to this extended durability, the addition of Aether and Reciprocal Aid allows self-recovery options when her HP falls to a less-than-desired range. This crippling combination tends to quickly spiral out of control as enemies march to their demise.

+5 Merge
High movility, great damage output and Vantage make it a monster in the enemy phase. It got few counters, mostly Falchion users or Firesweep builds.
It got S support with Aversa to get the most of both girls.