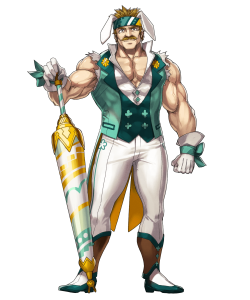 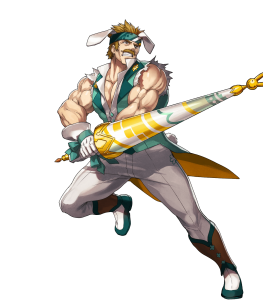 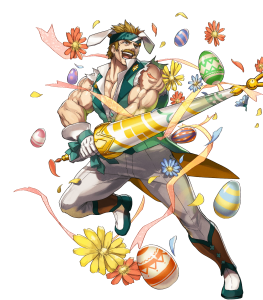 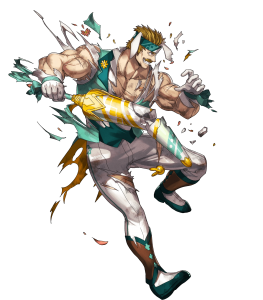 Resistance is a safe Flaw to take, though this is obviously not the case on the mixed phase build.

"Give 'Em a Squeeze!" (Physically Defensive)

Specialization in Attack and HP

Even in that tight and glorious bunny getup, Bartre's HP remains as high as ever and is exceptional amongst many infantry units to this day. The stat thus lends itself nicely to HP-reliant skills such as Panic skills and Infantry Pulse. Bartre's Attack also outdoes many units as well, allowing for at least decent damage output across any of his builds and heavy bunny-addled destruction on most things else.

Bartre's Defense lies at a solid and reliable value of 35, and it lends itself to nice scalable improvement depending on inherited skills like Sturdy Stance.

Being an infantry unit is practically a privilege in the game as Bartre is able to provide and benefit from a number of skills locked to this movement type. Infantry Pulse, Infantry Rush, Lull skills, Breath skills, and so much more (if you decide to go spicier than what this analysis provides) are on Bartre's menu if you are able to provide such tools.

This version of Bartre in all of his manly, carnal glory is available freely from his respective Tempest Trials event, and future iterations of him require alternative currency through Heroic Grails rather than Orbs.

While Bartre's HP, Defense, and Attack all lie at superb values for a free unit, increased BST and a rather tight bunny suit unfortunately couldn't save his Speed and Resistance to equitable levels. Said stats will be the main cause of many of Bartre's worst matchups if left uninvested, especially involving fast mages and dragonstone units.

Red sword infantry units are the most populous group in Fire Emblem Heroes at this time of writing, which may cause some team deployment issues. Although Bartre wins awards for exceptional physical tankability (a rarer category than "fast and offensive attacker"), this sort of niche role already has a few great existing contenders.

Summer Helbindi, for instance, sacrifices some Attack in exchange for superior defenses and access to Assets, and Itsuki is a generally more well-rounded choice with a unique weapon (resulting in less restrictive Coliseum scoring potential) and similar availability to Bartre. Líf also comes with insultingly similar stats, a prebuilt moveset consisting of exclusive skills that improve his tankability, and rotating summoning availability.

Lyon - Accepting, moving on and making the best out of it
It’s been about 19 hours since dreams were shattered. For some there was a light of…
How's Your AR Season Going? 3: Z Makes an Actual AR Thread
They said it couldnt be done 88 posts - 10 participants Read…
Time for a change
Officially, I am out of orbs… Couldn’t get Green Mythic or Naga… (At least, L! Tiki is…
Missing Character Post Update
I noticed I’m missing my fully merged Naga post update. I did not exchange her for…
Divine Codes 2 POLL Thread :fgo_meltbirb:
Here’s Shinx’s POLL thread for divine codes part 2! Notable/Rare Fodder: Three…
Read More