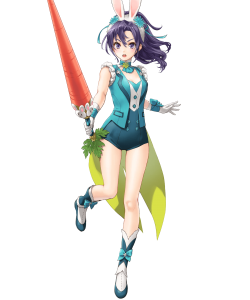 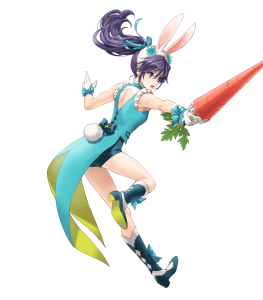 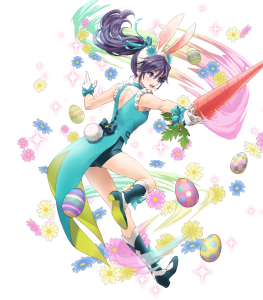 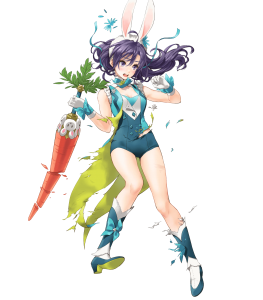 Fir boasts a wonderful offensive statline of 35 Attack and 41 Speed, allowing her to deal high amounts of damage and consistently perform follow-up attacks. In combination with her Bun-Bun Baton and Attack and Speed buffs, Fir can become an even more potent offensive force.

Bun-Bun Baton is an outstanding personal weapon that accelerates Fir’s Special cooldown by -1 (Slaying effect), grants effective damage against Armors, and neutralizes effects that guarantee the enemy’s follow-up attacks or prevent Fir’s follow-up attacks (Null Follow-Up). Its Slaying effect allows Fir to utilize Galeforce and 3-cooldown Specials more effectively without Quickened Pulse, and its Armor-effectiveness allows Fir to tear through high-Defense Armored enemies that Fir may have trouble ORKOing otherwise. However, Bun-Bun Baton’s most important effect is Null Follow-Up, a skill that fliers normally don’t have access to; with this, Fir can activate her Special and KO enemies much more consistently, as she will always perform a follow-up attack if her Speed is 5 higher than the enemy’s.

39 HP and 28 Defense adds to 66 physical bulk; while not great, it’s usually enough for Fir to survive at least one physical attack, with the exception of Archer attacks. This can also help Fir reach Desperation range (≤ 75% HP) so she can perform her follow-up attack before the enemy can counterattack.

As a flier, Fir’s mobility is fantastic, as she is able to cross nearly any terrain; this allows her to attack enemies that may normally be out of range and assist her allies across terrain they can’t cross with Reposition. Fir also has access to many movement-based skills such as Aerobatics, Flier Formation, Air Orders, Ground Orders, and Guidance, all of which can help both herself and her allies mobilize across the map.

Despite her base version’s 31 Resistance, Spring Fir only has 24 Resistance, making her prone to being OHKO’d by magical attacks. She also has difficulty taking advantage of Pegasus Flight, a skill that would increase her damage output and physical bulk.

Being a flier is a double-edged sword; while Fir receives lots of movement benefits, she suffers from decreased skill availability and a weakness to Archers. Notably, Fir can’t use Flashing Blade, Special Spiral, and Time’s Pulse, all of which would improve Fir’s damage output through more consistent Special activations.

Finally, IS releases a great attack oriented axe flier unit.
Having a weapon with special acceleration, armor effectivness, and a Null Follow up that is infantry exclusive makes her a great candidate for your flier emblem Aether Raids defense team.

Spring Fir builds would depend on where she stands. Attack/Speed Bond 4 and Wings of Mercy 3 if she stands behind.
Fury 4 and Flier Formation 3, if she stands on front of your setup.
Air Orders is also an honorable mention since it is a part of her default skills. This skill is onky to be used if she is placed in between the flier team to make AI movement harder to guess and opens up some B and seal slots for the others. Sometimes even C slot if you use Flier Guidance on your tanky Fliers placed on the front corners of your defense setup.