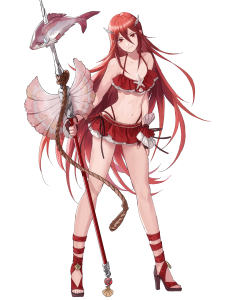 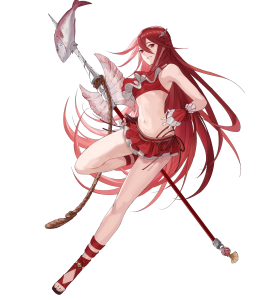 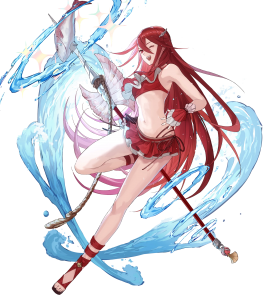 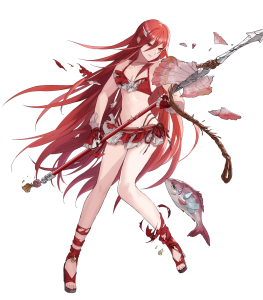 Sweeping by the Sea (Firesweep)

With her amazing offensive stats, Summer Cordelia is a prime candidate for the typical Firesweep build.

Summer Cordelia will ideally want either an Attack or Speed asset to push her offensive stats further. A flaw in any of the defensive stats will be fine considering she won’t be attacked on player phase, but Resistance is still optimal overall in case she does need to take a hit on enemy phase. The Firesweep Lance itself is a powerful weapon that allows Summer Cordelia to completely block enemy counterattacks but also suffering from not being able to counterattack herself. The Assist slot is open to whatever one desires, with Reposition being a safe choice for most cavaliers. For the Special, Moonbow works great thanks to the low cooldown that synergizes well with Heavy Blade. Glimmer is also great too for the same reason. Luna is also powerful, though at the cost of a higher cooldown.

In the A slot, Atk/Spd Solo gives Summer Cordelia a huge offensive boost when she has no nearby allies. This pairs perfectly with the offensive playstyle of this build since she’ll often be away from her team when attacking anyway. A much cheaper but still plentifully powerful option is Life and Death, with the loss of defensive stats being much less of an issue since Summer Cordelia will block enemy counterattacks anyway. Even cheaper still is Fury, granting a all-around boost to her stats. Chill skills synergize well with the Firesweep Lance since there is no need for B slot skills such as Desperation. Both Chill Spd and Chill Def will have an effect on Summer Cordelia’s overall performance. Drag Back and Hit and Run are also good options, allowing Summer Cordelia to retreat back one space after combat.

The C slot is quite flexible. Summer Cordelia can make great use of Wave skills such as Even Spd Wave or Even Atk Wave to power herself up without any external support. A Wave skill is absolutely not required for this build to function, so feel free to experiment and see what works. If she’s alongside other cavaliers, she’ll want to take a Cavalry Buff such as Hone Cavalry instead. Finally, Heavy Blade makes for a fantastic Sacred Seal option. As long as Summer Cordelia has more Attack than her opponent, she’ll charge her Special by two instead of one per attack, allowing her to consistently charge Moonbow or Glimmer. If this Seal is unavailable, simply using either a Speed or Attack Seal is a good option.

Summer Cordelia doesn’t need a Firesweep Lance to be powerful offensively. In fact, she can be very strong on the attack with a selection of other weapons instead.

Again, Summer Cordelia would prefer a asset in either Attack or Speed for the offensive boost. Resistance remains her best overall flaw. For the weapon, Harmonic Lance works great, giving extra power to her Special attacks whenever they activate. Her default Shell Lance is also a great choice, giving her a small boost to all stats when she initiates combat. In both cases, refining the weapon for the Speed refine will give Summer Cordelia great offensive potential. The Assist is fully flexible. Reposition is a general choice for cavaliers. For the Special, either Moonbow or Glimmer allows Summer Cordelia to consistently activate her Special thanks to their low cooldown and gain the most benefit from the Harmonic Lance.

For the A slot, Atk/Spd Solo grants a huge offensive boost when Summer Cordelia has no adjacent allies. However, this skill is very expensive and it sometimes might not be possible to activate it. Swift Sparrow is a strong alternative, granting a lower offensive boost but only having the simple requirement of initiating combat. A good budget option is Fury, granting an overall stat boost and the recoil damage somewhat assisting Summer Cordelia in that it helps her to more easily reach the Desperation threshold. Speaking of, Desperation is a fantastic choice for the B slot, allowing Summer Cordelia to make any follow-up attack immediately after her first. Outside of this, both Chill Spd and Chill Def work great.

A wave skill such as Even Atk Wave or Even Spd Wave works great in the C slot, boosting Summer Cordelia and adjacent allies on every other turn. A Wave skill is far from necessary though. If she’s on a cavalry team, giving her a Cavalry Buff such as Hone Cavalry will likely be a superior option. Heavy Blade works great as a Sacred Seal, letting Summer Cordelia fully charge her Special in a single hit should she have more Attack than her opponent which in turn allows her to consistently activate Moonbow or Glimmer even with Desperation active. Outside of this, either a Speed or Attack Seal will give Summer Cordelia one last helpful offensive push.

Offense is not all Summer Cordelia is capable of. In a twist of events, she also makes for a strong defensive option.

With this build, either Speed or Defense will be Summer Cordelia’s best option, with both helping her defensive capabilities. Resistance remains the optimal bane. For the weapon, the Tannenboom! grants Summer Cordelia with a small but helpful boost to stats when attacked. Alternatively, the Slaying Lance is also a great option that helps Summer Cordelia to activate Specials more frequently. Refining either for Speed or Defense will help her defensively. The Assist slot is open to player preference, with Reposition being a safe general choice. Moonbow makes for a great Special as Summer Cordelia will consistently activate it almost every battle. Luna is also a good option with more power but a longer charge compared to Moonbow. If one wants Summer Cordelia to heal herself through her attacks, Noontime can also be considered.

Steady Stance 4 grants Summer Cordelia with a massive Defense boost when attacked, as well as prevent her opponent from charging their Special and helping to alleviate the Special charging effect of skills such as Bold Fighter. Steady Stance 3 is much cheaper than the level 4 version but is much less desirable overall. Still, Steady Stance 3 is a potential option. Alternatively, Close Def give Summer Cordelia a defensive boost whenever attacked from melee distance. Fury is a solid budget option that gives an overall boost to Summer Cordelia’s combat performance. Since Summer Cordelia is so fast, she is less reliant on Quick Riposte and has greater B slot flexibility. Renewal grants her some beneficial self-sustainability through healing. Guard is another option, preventing opponents from charging their Special and alleviating the Special charging effect of skills such as Bold Fighter. However, Guard comes built into Steady Stance 4, so do not use Guard with Steady Stance 4. Quick Riposte itself also remains a good option as Summer Cordelia will not always be capable of securing a follow-up attack.

Wave skills such as Even Def Wave allow Summer Cordelia to sustain herself through self-buffs every other turn. However, these skills are not at all necessary for this build to perform well. If she’s alongside other cavalry units, she would prefer to run a Cavalry Buff such as Hone Cavalry instead. Atk/Def Bond makes for a fantastic Sacred Seal choice, giving Summer Cordelia which some much beneficial Attack and Defense whenever adjacent to an ally. Close Def is also a great option for the Sacred Seal. Even the simple Speed Seal is a good option too.

Cordelia, the knight prodigy from Ylisse, has returned to Heroes once more. This time, she’s here for a trip to the seaside for some summer fun. Summer Cordelia is a lance cavalier, primarily focused on offensive potential. Statwise, there is a lot to like about her.

First, Summer Cordelia possesses a strong 32/38 offensive spread. She hits hard and has great doubling potential as well. One would expect such offensive capabilities to come at the cost of defensive capabilities, but that’s not true with Summer Cordelia. She also possesses a solid 41 HP and 28 Defense, giving her good physical bulk that’s only supported further by her high Speed. Her one weak point is her Resistance which is really bad, but it’s not enough to subtract majorly from Summer Cordelia’s overall great package.

With 32 Attack and 38 Speed, Summer Cordelia already secures her place as a powerful offensive unit. The 38 Speed is her main selling point, giving her fantastic potential to perform follow-up attacks. 32 Attack is not the highest, but it’s more than plenty to work with. She can make great use out of weapons such as the Firesweep Lance, Harmonic Lance, and her default Shell Lance thanks to these offensive stats.

With 41 HP and 28 Defense, Summer Cordelia is more than capable of taking some physical punishment. Combined with her high Speed which helps her to avoid enemy follow-up attacks, Summer Cordelia can become surprisingly tricky to take down with physical units. These defensive stats are high enough to the point where a defensive setup is more than possible, particularly since Summer Cordelia does not necessarily need Quick Riposte thanks to her Speed.

Cavalry themselves have a lot of natural strengths that benefit Summer Cordelia. Namely, their movement range of three makes it easier for Summer Cordelia to reach and attack her foes. She can also benefit massively from Cavalry Buffs which are easy to acquire.

The weakest link in Summer Cordelia’s statline, her Resistance of 18 is downright bad. Mages and dragons alike will prove to be a serious threat to her. Even red mages and dragons will be able to do considerable damage despite the Weapon Triangle disadvantage. Keeping Summer Cordelia away from magical threats as much as possible is advised.

Cavalry units have their strengths, but they also have their distinct weaknesses. They are the movement type most hindered by terrain, being stopped by trenches and being completely unable to cross forest tiles at all. This can hurt Summer Cordelia severely as the terrain could very well stop her from reaching her target or getting her to where she needs to be.