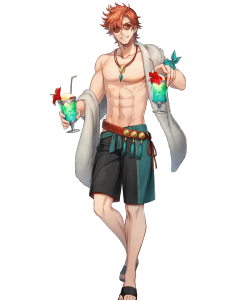 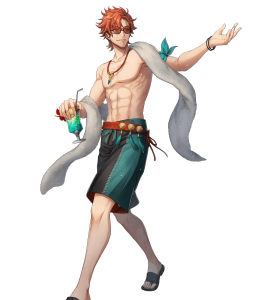 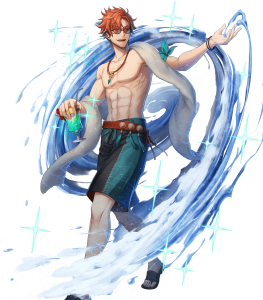 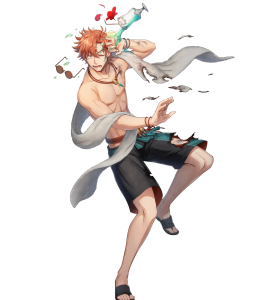 Grace of the Radiant (Defensive Tank)

Although it may not be anything particularly exceptional, Summer Sylvain’s offensive statline of 32/35 remains solid nonetheless, and provides him with relatively good damage potential and versatility.

Unlike the majority of other units who share his typing, Summer Sylvain’s physical bulk is surprisingly ample and allows him to trade blows from opposing physical hitters pretty well; this also opens up his build variety a bit more should one wish to capitalize on this trait.

Sylvain’s cavalry status provides him with strengths such as access to class-exclusive buffs and extended mobility, which can lend themselves well to a variety of playstyles and uses.

His cavalry status does impose some restrictions, however, such as hampered mobility on maps where certain terrain (trenches, forests, etc.) is present, restrictive skill availability, and a weakness to effective weaponry.

Although his good amount of HP does help safeguard him from being OHKO’d, Sylvain’s low base Resistance still poses an issue should he need to take more than a single magical hit unless one properly invests in his Resistance or takes the necessary precautions.

Take a guess what this build is supposed to do.

These Plegian weapons are stupid. An essentially free -5 Atk/Res is very nice. It gets even better once the debuffs to the stats are applied. Refined for speed because meta.

Use any assist skill you want. Could use Repo, Draw Back, a Rally+, etc. Really just personal preference.

Atk/Spd Solo 4 (or 3, whatever you have) synergizes quite well with Plegian Torch+, requiring the simple task of being alone.

A Lull Res skill debuffs opponents even further, but you could also use Desperation, as it ensures Sylvain doesn't get hit past a certain threshold (except for Hardy Bearing, but ya know).

Finally, you can either use double Smokes or you can use a Res Smoke and Atk/Spd Solo Seal for even more offensive stacking.

What's great about this build is that a lot of it is interchangeable, so you can tweak this template as you will.

Basically, this is a nuke build, trying to kill anything before it has a chance to kill him. Toss Laslow, a link skill runner, or a Dancer with a stat-boost dance B-slot with him and let him go to town. Flashing Blade could also be run for this build instead of spd/res or atk/spd solos, but without merges he might be hard-pressed against some crucial targets. +Spd for maximum followups, -HP is primarily to get him to that crucial under 75% for QR, though you could go with -Res as well since his Res isn't that fantastic to begin with and his signature weapon doesn't help it all that much IMO even if you decide to run it. -Def wouldn't be horrible either, especially since he's going to have plenty of trouble with most DC axes/Blue Dragonstones and any DC Sword/Non-Blue Dragonstones. (And this ignores going for any merges, of course, personally I say at least go for 1 since he's the 4* focus of this banner) Basically, boost his speed, leave his attack alone, and you can toss any of the three defensive stats you feel comfortable with. The most crucial thing for this build is to keep him non-adjacent at start of turn to get that rouse at minimum, and try to keep him out of range of being attacked.

Sylvain is the second green tome cavalier released in the summer months of 2020, and he made his debut appearance in Heroes on the heels of Selena. Sylvain trades in some points in offenses for extra HP and Defense while dropping his Resistance, which sits at a measly 16 at base. Overall, his selling points are his good availability as a 4-5★ hero, and his generally satisfying stats across the board.

Weapon: Gronnblade+
Gronnblade allows its user to turn visible buffs into substantial damage. With proper support, Sylvain can tear holes in even the toughest of enemies, and when his Special triggers, he only becomes more lethal.

Assist: Reposition
Sylvain can use skills like Reposition to help move his allies in and out of combat. His status as a cavalier means that he can move across the map with ease, as long as he isn't barred by prohibiting terrain like trenches.

Special: Glimmer
Since Glimmer scales off of the damage that Sylvain does (which will be pretty large with enough support), it is easily the most appropriate Special for him to use. Moonbow is a contender, but it can be inconsistent, as it scales off of enemy Resistance.

A: Atk/Spd Solo / Atk/Spd Push / Swift Sparrow / Fury
Sylvain has access to a plethora of skills that all boost his Atk and Spd — valuable boosts that he can use to maintain offensive presence on the battlefield. These options include Atk/Spd Solo 4, Atk/Spd Push 4, Swift Sparrow 3, and Fury 4. The premium variant of Atk/Spd Solo and Push offer the same benefits, but both have drawbacks involved with their use. Solo skills require the user to not be adjacent to any allies, which is not always possible in some maps, while skills like Atk/Spd Push and Fury will slowly chip away at Sylvain's health. The most consistent, Player Phase-oriented A skill that he can use is Swift Sparrow.

B: Lull Atk/Res / Lull Spd/Res / Desperation / Chill Res
To make Sylvain really shine, Lulls are an option. While Res-focused Lulls are incredibly hard to come by — only on Kiria and Lysithea as of time of writing — they give Sylvain an opening against resistant foes by nullifying visible bonuses to each of the stats affected by the Lull, as well as reducing the stats by an additional 3 points. The effect of the Lull means that the enemy cannot stack their Resistance with buffs from Tactics, Rallies, and Fortifies, which could reduce Sylvain's effectiveness in combat. As Lull skills are still very hard to come by, and depending on what A skill he is running, Desperation is a suitable, budget alternative that allows him to make two consecutive attacks when he is low on HP. Desperation pairs very well with Atk/Spd Push or Fury in the A slot. Lastly, Sylvain can run his native Chill Res to apply a global debuff to the opponent with the highest Resistance, which can help not only himself, but any other magical allies on his team.

C: Rouse Atk/Def
Rouse Atk/Def, Sylvain's native C slot skill, gives him a much-appreciated boost to both his Attack and physical bulk, which also adds to the damage output of Gronnblade. As it stands, Sylvain can make perfectly good use of his base C slot, and there aren't many other skills that he needs to perform well in his role.

Sacred Seal: Brazen Atk/Spd / Swift Sparrow
As Sylvain will naturally chip away at himself with a skill like Atk/Spd Push or Fury in the A slot, Brazen Atk/Spd is the perfect complement that pushes his offenses even further while in combat, which, in tandem with Desperation, only makes him that much more threatening. Otherwise, making use of Swift Sparrow is perfectly acceptable, which offers a relatively uncomplicated (but powerful) Player Phase boost to Sylvain.