Who should I summoner support?
@CommanderRyu wrote: Finn Leif Líf (when he comes out)…
Ideas for some Thracia 776 heroes
@MovingStone wrote: Galzus: Tainted Blade Father of…
Man, do you ever get those "why not just a bit more _____" stat line?
@ibaesgae wrote: Like bro, just 3 more res and I’ll be…
Halloween Rolf: My next grail project
@Tymerion wrote: I finally got enough grails to +10 him! …
Everything about Legendary Leif is a fraud (lore-wise)
@MovingStone wrote: Seriously, I’ve been playing Thracia…
Read More
GamePress
Featured Update FEH Content Update: 01/16/2020 - A Star is Born

Should You Pull - Book IV Begins: Peony and More Edition 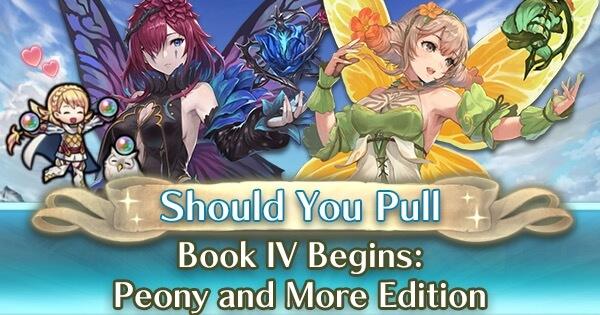 This is a standard four unit banner, meaning that the odds start at 3%. Note that two units are occupying the red pool this time and since this is a four person banner, the odds for pulling a specific five star are a bit lower than in other banner types, so take caution.

Versatility at its Finest

Eyvel’s overall statline is quite solid and features strong values across the board, in large part due to her immense BST of 172. While her offensive spread of 33/35 may not be particularly outstanding in comparison to some newer additions to the game, it nonetheless provides her with a good foundation for outputting consistent amounts of damage against opposing foes. Combined with her rather considerable mixed bulk, Eyvel is able to boast great versatility as she can easily be built to fulfill different purposes, with this ranging from offensive to defensive roles.

Compared with the free Astram

Compared with the three star Hinata

The only unit on this banner to lack an exclusive weapon, Eyvel joins the already bloated pool of infantry sword users with not much to her name other than a rather balanced statline. She sports relatively solid values across the board, her most standout featuring her immense physical bulk of 79; this offers her great durability and allows her to excel when equipped with defensively oriented setups. Fortunately enough for the mercenary, her base kit complements this inclination quite nicely, though her statline remains flexible enough such that she can perform admirably taking on a variety of roles. However, aside from her inherently good statline, there’s little else that serves to distinguish Eyvel from many of her direct competitors; this can make it difficult to recommend using her should one have already invested heavily in a similar (or better) unit.

Statwise, Mareeta is an (almost) directly improved version of her Fallen incarnation, showcasing equal or better values on all fronts barring HP where she loses by 1 point. Her offensive spread of 35/42 is simply phenomenal and offers her fantastic firepower at all times; her Speed is especially remarkable as it sits as the highest in the entire game and can be bolstered even further with a four-point +SPD IV to boot. Despite her statline’s focus on maximizing her offensive capabilities, however, Mareeta’s survivability hasn’t suffered much either -- to the contrary, her physical and magical bulk of 72 and 64 combined with her high Speed make it quite difficult to quickly land a KO. Her base Resistance stat of 23 is a bit middling, but her PRF’s conditional +4 in-combat boost alongside her access to a four-point +RES IV allow her to mitigate this weakness to a notable extent.

Compared with the five star Ayra

Compared with the five star Mia

Faster than the Speed of Light

Mareeta’s exclusive weapon, the aptly named Mareeta’s Sword, is undeniably powerful and allows her to perform exceptionally well in both phases, granting her a passive -1 Special cooldown on top of a Null Follow-Up effect and +4 in-combat boost to all of her stats when she has no adjacent allies.

Path of the Freeblade

Making her second appearance in Fire Emblem Heroes (this time freed from the clutches of her cursed sword), Mareeta manages to stand out amongst a sea of fellow infantry sword users thanks to the overwhelming might of her exclusive weapon, Mareeta’s Sword. It carries three unique effects, most notable of which being built-in Null Follow-Up; this itself constitutes a meaningful advantage in Mareeta’s favor through the flexibility of having a free B slot for other strong alternatives, such as Null C-Disrupt, Windsweep, and her native Close Call. When taken into consideration alongside her PRF’s other effects and her impeccable overall statline, this combination of attributes collectively grant the young woman immense versatility and transform her into one of the most powerful sword units around.

Osian’s offensive statline of 35/36 is quite good and stands out as one of the best in his class, being comparable to the likes of other formidable axe wielders such as Gerik and Raven. His overall bulk isn’t particularly lacking either, allowing him the flexibility of being able to directly take on a few hits in the course of battle. In addition, since his statline is pretty balanced, he is relatively flexible in the way that he can be built and utilized — especially when taking his Speed into consideration.

Compared with the five star Gerik

Compared with the three star Raven

Osian’s exclusive weapon, Vouge, is relatively straightforward. In addition to granting him a passive -1 Special cooldown, this axe comes packed with a conditional Distant Counter effect built-in, requiring that Osian have 50% HP or greater at the start of combat in order for this to remain active.

Osian makes his debut in appearance as an infantry axe wielder with commendable offensive might. His statline alone makes him quite versatile; with a superb offensive statline of 35/36 and solid overall bulk, Osian is undoubtedly a highly versatile unit who can meet one’s expectations swimmingly at numerous different roles. Also, unlike the recent hordes of infantry axe wielders to enter the fray (such as Echidna, Gerik, Ross, etc.), Osian enjoys access to a PRF weapon of his own: Vouge. Carrying two strong effects in the form of accelerated cooldown and innate Distant Counter (provided that his HP is above 50%), Vouge allows him to make the greatest use of his statline and perform excellently as a defensively oriented nuke -- and what’s more, his base kit’s phenomenal synergy allows him to do so with minimal investment.

For a dancer, Peony’s overall statline is pretty decent. Her magical bulk and offensive statline are thoroughly respectable, with her moderately high Speed stat of 36 being a useful advantage due to its defensive properties; when capitalized on with the proper skillset, Peony can deny enemy follow-up attacks fairly reliably and gain a good amount of additional survivability. However, in large part due to simply having an insufficient amount of stat points to allocate, the lively fairy’s physical bulk is resultantly incredibly disappointing. While this doesn’t really detract from her usefulness all that much given her primarily support-focused role, it still poses a serious detriment worth considering in anticipation of instances where combat is unavoidable.

Compared with the free Rinea

A New Take on an Old Standard

Peony sports access to two exclusive skills of her own. The first is Flower of Joy, a great supportive weapon that grants any ally in her cardinal directions a +3 Atk/Spd in-combat boost. The second is Gentle Dream, an exclusive Assist skill that retains the refreshing properties of Sing and Dance but takes it a step further: any ally she uses it on (as well as allies in the cardinal directions of her and her target) will subsequently gain a unique movement buff comparable to Aerobatics for the duration of the turn, in addition to a +3 buff to all of their stats.

Dawn of a New Era

Elf on a Shelf

Peony is an exceptional support unit defined by the distinct strengths of her two personal skills: Flower of Joy and Gentle Dream. While Flower of Joy is certainly an excellent asset in her arsenal, Gentle Dream remains the more impactful of her two PRF skills and is particularly notable for its mapwide coverage, not to mention the unique mix of movement and field buff utility it provides. As one of the two Light Mythical Heroes currently available, Peony’s worth as a unit is only bolstered further as she can play an integral role in maximizing one’s scoring potential in Aether Raids Offense, especially when deployed alongside another Light Mythical Hero (such as Eir or a second copy of Peony). However, in exchange for her sheer supportive capabilities, Peony lacks any sort of real offensive prowess and can struggle engaging in extended rounds of combat; this can be mitigated by equipping her with an offensively oriented weapon like a Blárblade tome, though this comes with its own issues of sacrificing some of her supportive potential and reach.

Who should I summoner support?
@CommanderRyu wrote: Finn Leif Líf (when he comes out)…
Ideas for some Thracia 776 heroes
@MovingStone wrote: Galzus: Tainted Blade Father of…
Man, do you ever get those "why not just a bit more _____" stat line?
@ibaesgae wrote: Like bro, just 3 more res and I’ll be…
Halloween Rolf: My next grail project
@Tymerion wrote: I finally got enough grails to +10 him! …
Everything about Legendary Leif is a fraud (lore-wise)
@MovingStone wrote: Seriously, I’ve been playing Thracia…
Read More
Menu