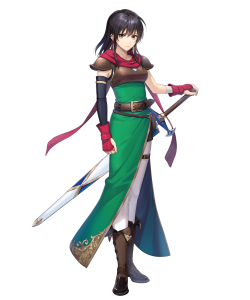 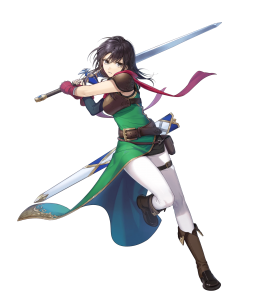 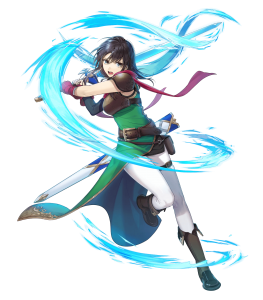 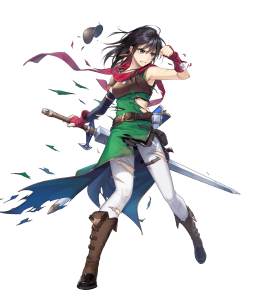 Swordmaster of the Stars and Moon (Enemy Phase Distant Counter)

Mareeta: Sword of Stars is a powerful sword infantry hero with a fantastic PRF weapon and great base stats. With a massive base Speed of 42 and a 4-point Speed Asset, Mareeta surpasses her previous iteration for the title of fastest hero in the game, as of the time of her release. Additionally, the rest of her offensive stats aren’t lacking either: 35 base Attack and 31 base Defense allow Mareeta to trade blows well.

Aside from her great base stats, Mareeta’s most notable feature is her unique weapon: Mareeta’s Sword offers Special charge, +4 to all combat stats, and the ability to neutralize effects that prevent her follow-up attacks and guarantee the enemy’s follow-up attacks. This makes her both powerful and versatile in a combat role, performing well in both Player Phase and Enemy Phase.

Mareeta’s main weakness is her poor Resistance, leaving her vulnerable to magical heroes with high Attack. Mareeta also tends to benefit from skills that restrict her ability to end her turn adjacent to teammates, including her PRF weapon as well as Atk/Spd Solo in her base kit. Nevertheless, with the right playstyle she can be a clinical hero.

“I’m the daughter of Eyvel of Fiana! No mere bandit could defeat me!”

35 Attack and 42 Speed is an impressive offensive stat spread, which serves as a strong foundation for further improvement through Mareeta’s Sword, passive skills and combat buffs.

Mareeta’s PRF weapon offers a multitude of helpful effects, including a bonus to her combat stats, Special acceleration and a beneficial impact on follow-up attacks. This weapon sets Mareeta apart from her rivals, whose own PRF weapons fail to meet the standard set by this blade.

As Mareeta is an infantry hero, she has access to a variety of passive skills that improve her combat capability in several different roles. Access to skills like Flashing Blade, Time’s Pulse, Wrath, Null-Follow Up and Rouse Atk/Def make Mareeta a versatile attacker, capable of utilising a variety of different skills to complement her playstyle.

Mareeta’s 41 HP and 31 Defense give reasonable physical bulk of 72, before accounting for other bonuses through her weapon and teammates. This allows Mareeta to withstand a couple physical attacks in combat, prolonging her usefulness on the frontlines.

Mareeta’s base Resistance is only 23, leaving her vulnerable to KO by magic-based attackers. Mareeta should be particularly wary of ranged mages who can catch her out with their good attack range, and dragons who Mareeta fails to defeat in combat.

Mareeta’s PRF weapon is powerful, but the restrictions to her position necessary for her to benefit from the combat buffs can be difficult to work around in some situations.