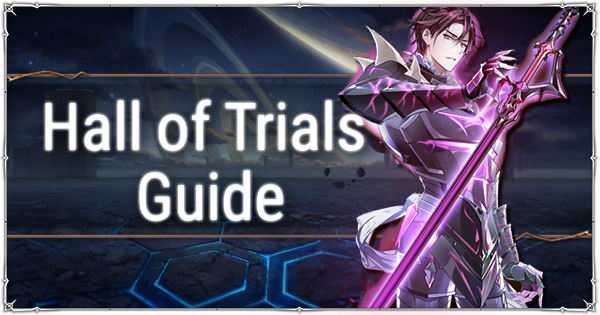 In this game mode Heirs will have the opportunity to challenge opponents that have been recreated from the records of The Memory Chain. Opponents will rotate from week to week, and each opponent will have different advantages and disadvantages. Heirs should pay close attention to the opponents characteristics and create strategic team compositions to earn the highest amount of points.

How to Receive Rewards from Challenging Opponents

This mode will allow Heirs to test team compositions and battle strategies without having to spend any Book of Retribution. Heirs will NOT earn any points from practice battles and results will not be recorded.

The Hall of Trials has basic rules that Heirs should pay attention to for maximizing success. As with other game modes, the higher your team’s Combat Power the more damage that will be inflicted. However, in this mode, the Soul Gauge will NOT fill and Heirs will not be able to use Guardians. Heirs should pay close attention to the Enrage Bar above the Boss. When this bar fills, the Boss enters Berserk mode-- debuffs will be cleared and their damage output will be increased. Each battle will consist of three battle phases and two weakened phases. Heirs that decrease the Boss’ health to zero will be able to deal increased damage. The battle is over when the Boss is defeated after five phases or the Heir’s team is defeated.

Heirs will use the Book of Retribution currency to enter the Hall of Trials battles (excluding Practice Mode). Heirs will receive three Books of Retribution once per week when the server resets.

Exclusive equipment earned from exchanging Wisdom’s Gaze can be equipped on Heroes under specific conditions. To equip the exclusive equipment the applicable Hero must be 5★ awakened or higher. When this condition is met, a new slot will appear on the Hero equip screen where the Heir will be able to equip the Exclusive Equipment.

Each month the Hall of Trials will feature four bosses with strengths and weaknesses that rotate weekly. 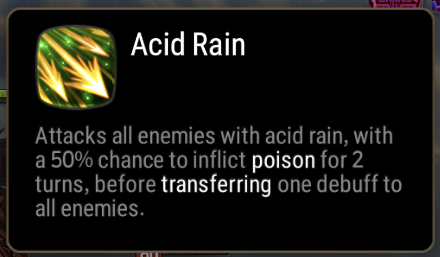 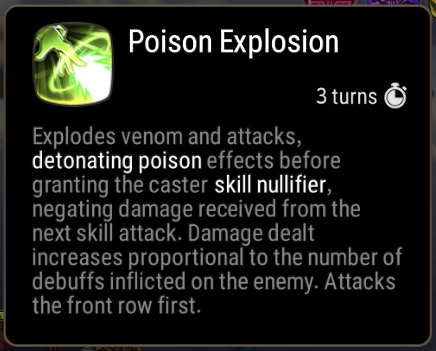 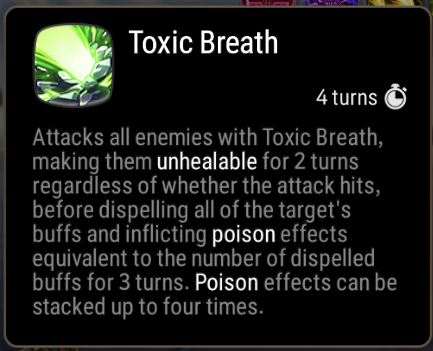 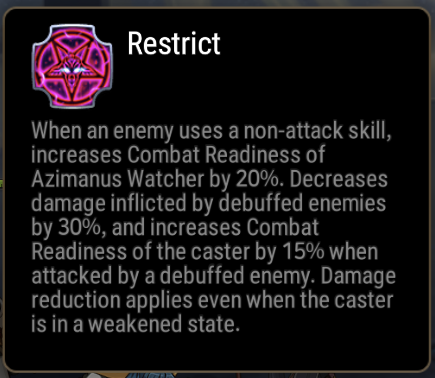 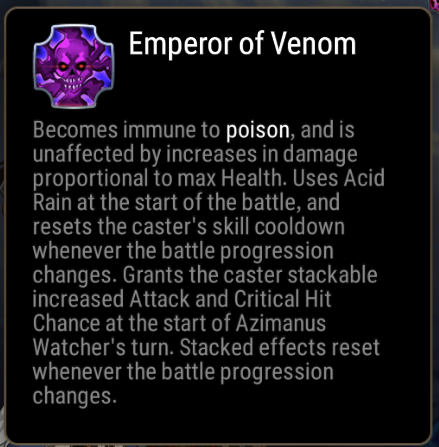 Nilgal’s S1 (Acid Rain) has a 50% chance of inflicting allies with poison for two turns. Due to Nilgal’s Restrict ability, any of your Heroes that are debuffed suffer a 30% decrease to any damage they inflict (this still applies when he is in the weakened phase). Heirs should also note that any debuffed allies that attack Nilgal will increase his combat readiness by an additional 15%.

When Nilgal uses his S2 (Poison Explosion) any of the Heir’s allies inflicted with Poison will suffer extra damage from Detonate, and any damage dealt from the next skill attack made by an ally Hero will be nullified. Additionally, his S2 deals extra damage to debuffed ally Heroes (focusing on the first row).

Nilgal’s S3 (Toxic Breath) prevents the Heir’s allies from healing for two turns, even if the attack misses. It also dispells all ally buffs; for each buff removed a Poison stack is applied (up to a maximum of 4) for three turns.

In this phase Heirs can focus on inflicting damage as Nilgal will use his S1 rather than his more powerful skills (which he will use in later phases). Focus on Nilgal, as his adds (two Azmakanis Watchers) are invincible. Heirs should focus on using skills that buff damage, ensure they are utilizing Hero types with Advantages (as detailed in a previous chart), and utilizing Defense Break skills.

Once Heirs have decreased Nilgal’s health to zero he will enter a period where he is stunned and becomes significantly weakened. During this period, he will have zero defense and zero effect resistance. This phase will last until the blue bar completely refills. Heirs should ensure they have Heros who can cleanse debuffs and increase attack so that damage during this phase is maximized.

This phase is similar to Phase 1, but Nilgal will use his S3 rather than his S1. This phase will be more difficult than the first, and with the use of Nilgal’s S3 the debuffs will stack up quickly. Heirs will want a cleanse skill available for use, and could also follow up with an immunity granting skill. This should help prevent immune allies from receiving debuff stacks that would decrease their inflicted damage to Nilgal. Heirs should pay attention to the timing of skill usage based on Nilgal’s use of his S3, which converts debuffs on allies to Posion stacks. Cleanse skills should be used prior to the use of his S3, which in turn decreases Detonation damage from his S2.

Phase four is similar to phase two, except the damage Nilgal inflicts to Heir allies is increased. This phase will last until the blue bar is completely filled. Heirs should use the same strategy they used in Phase 2.

This phase is similar to Phase 3, expect Nilgal has increased Health. He hits the hardest in the phase, and his damage will be increased by the Azmakanis Watcher adds. For best results Heirs should attempt to complete the battle in Phase 4, if unable, they should focus on the same strategy utilized for Phase 3.

*Despite being a Mage, Dizzy’s S3 is an extremely effective debuff option and makes her worth using for this battle.

*Tamarinne is also a very good Hero to utilize for this battle as she is able to fulfill multiple functions including healing and team buffs. 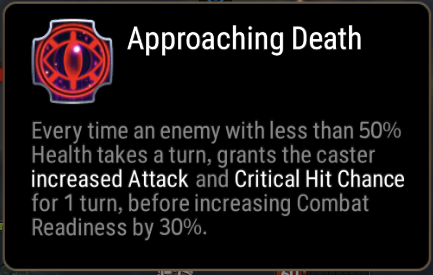 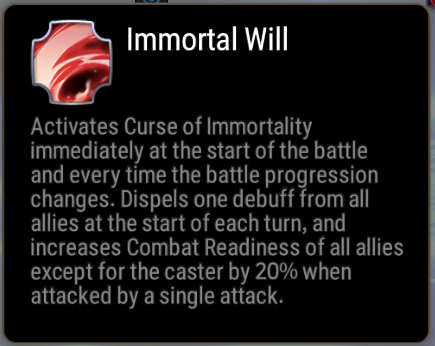 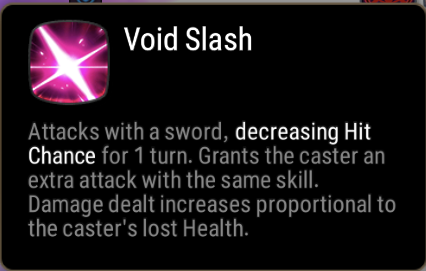 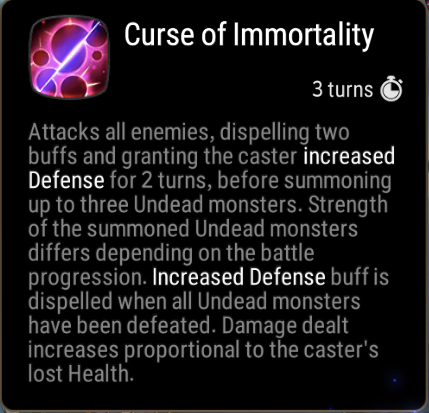 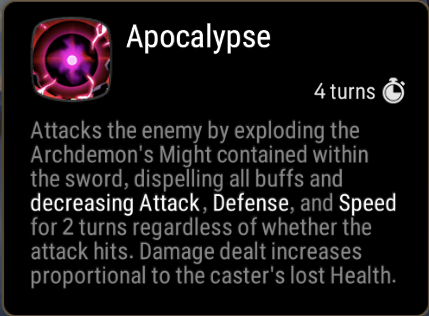 Kayron’s skill set focuses on punishing the Heir’s weakened Heroes, summoning adds (buffing their Combat Readiness), and removing buffs from the Heir’s Heroes. Heirs should build teams that focus on providing consistent healing and cleansing to prevent adverse effects from Kayron’s Approaching Death skill. They should also include Heroes that can increase team speed and attack (to ensure Heirs can keep up with the consistent Combat Readiness buffs cast on enemies). Heroes with AOE damage are also an asset to help quickly dispense of the adds that Kayron summons.

Void Slash decreases the Hit Chance of Heir’s Heroes twice, because the use of the skill grants Kayron a second Void Slash attack. Heirs should pay attention to the increasing strength of this ability, which has an inverse relationship with Kayron’s Health.

Curse of Immortality summons three adds, which will be stronger based on what phase of the fight Heirs have progressed to. It is important for Heirs to defeat the adds as quickly as possible; doing so dispels an increased Defence buff granted to Kayron when he casts his S2.

During this phase damage inflicted by Kayron is weaker than damage that will be inflicted in later stages. Heirs should focus on inflicting damage to bring his Health to zero before the bar above his head turns red and he enters Berserk mode. Heirs should ensure that when Kayron’s Health is nearly fully depleted they have skills available to buff their Hero’s attack and debuff the enemy. This is so that when you enter Phase 2 you can inflict as much damage as possible to achieve a higher overall battle score.

Once Heirs have decreased Kayron’s Health to zero he will enter a period where he is stunned and becomes significantly weakened. During this period he will have zero defense and zero effect resistance. This phase will last until the blue bar above Kayron’s head is completely filled.

During this phase Kayron’s damage output is increased, and he will summon three new adds. When these adds are summoned two buffs on the Heir’s Heroes are dispelled. As previously mentioned, Heirs should focus on destroying the adds before focusing on Kayron, as they can inflict Stun. Heirs should also plan to have the same available skills as they did approaching the end of Phase 1 and entering the stunned phase identical to Phase 2.

Phase 4 is similar to Phase 2. This phase will last until the blue bar above Kayron’s head is completely filled. Heirs should use the same strategy they used in Phase 2.

Heirs should note that Kayron’s skills significantly increase his damage output, this is highly relevant during Phase 5 as his damage output becomes extremely difficult to survive. Heirs should recall that as Kayron’s Health decreases the damage he inflicts increases. Kayron will also summon three new adds that inflict significant amounts of damage. Heirs must focus on destroying the adds before Kayron because they will use a skill that targets an Heir’s Hero, who will then be killed in three turns. This can only be prevented by killing the caster, therefore it is a must to prioritize killing the adds.

To defeat Kayron in this phase Heirs must focus on aggressive healing to ensure their Heroes survive, and inflicting as much damage as possible. Heirs should gear their Heroes with the understanding that low Health Heroes are in danger of falling victim to a OHKO. Kayron is vulnerable to many debuffs, including decreases to Speed, Attack, and Hit Chance. Heirs should use Heroes who can use debuffs strategically to increase damage output and make Kayron’s skills less effective.