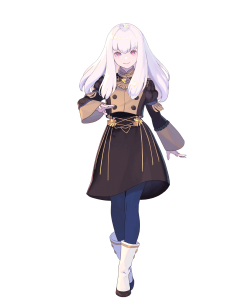 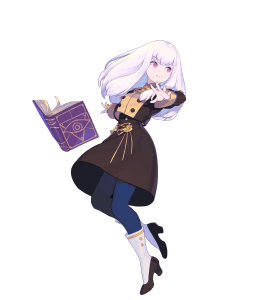 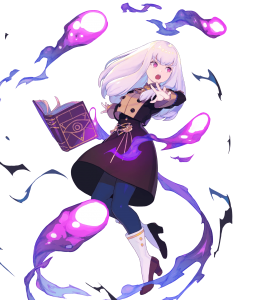 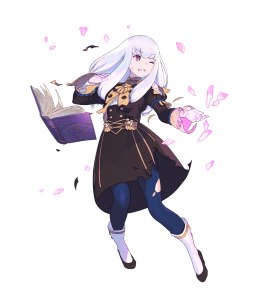 Lysithea's sheer savage splendidness in Three Houses fortunately translates well from Three Houses to Heroes. Her lethal base 41 Attack and 37 Speed will rarely fail to impress under many circumstances as she is able to deal a large amount of damage packaged with a good amount of follow-up opportunities.

If Lysithea's raw offensive stats weren't impressive enough already, her signature tome Hades Ω gives even Tharja and Kiria some hellish competition. In addition to permanently cutting Lysithea's Specials by 1 thanks to accelerating their Special trigger (somewhat of a luxury among tome users), the tome also has Swift Sparrow 2 built into it. On top of this, it even grants an additional 6 Attack in-combat when Lysithea's Special is ready to fire. All in all, Hades Ω does well in amplifying Lysithea's sheer offensive might.

Time's Pulse, Lull Spd/Res, and Special Spiral are all prime offensive options that Lysithea can only be thankful for thanks to her Infantry status. Her being a tome user is also a general advantage in the grand scheme of things as the majority of threats tend to be Resistance-weak, a problem even for Distant Counter users.

Like most star units on their banner, Lysithea is superbly pre-built and requires very little inheritance and overall asset costs to express how oh-so-irrelevant the masses are.

Lysithea's superb offenses come at the cost of pretty much all of her defensive stats. 37 HP, 21 Defense, and 24 Resistance are below average even for your average fast offensive unit, leaving Lysithea vulnerable to stray attacks if she doesn't kill first or use skills such as Fury or Impacts to increase her survivability.

As a consequence of Lysithea's bad defenses, her enemy phase performance is very bad in contrast with her awesome player phase.

The purpose of this?
Well, if you don't 1 shot your opponent (E.g. Fallen Hardin or Fjorm) and they counter, your most likely going to die, right?
Not Anymore. Introducing....

Sturdy Impact: +6 atk might not be as good as her base skill Death Blow 4, however, to make up for it, she gains 10 extra def if she initiates AND her foe cant make a follow-up attack.
Warding Blow 3 (seal): "Why should I put this basic skill as her seal" you maybe asking. Well that +6 res if she initiates will help her out against tanky blue mages (E.g. Oliver, Micaiah etc.)
Glimmer: takes the ridiculously high damage she'll do and amplifies it. of course, low res targets or any green unit is now even more screwed when up against Lysithea, but this helps out more than moonbow does in quite a lot of situations. where as moonbow relies on the targets res being high to increase damage, glimmer rely on Lysithea's own damage output, which in most cases, will be verry high

Lysithea's Base Build has Times Pulse, which you'd be a fool to remove, due to her special being only 1 cool-down, meaning you get it every player phase. Her base build also includes Lull Spd/Res 3 which prevents tankier blue mages from buffing their Spd or Res.

In summary this build is supposed to patch up her vulnerabilities she gets from versing blue heroes like Oliver, Fallen Hardin and Fjorm, since you sacrifice moonbow for glimmer.

This build goes off of Lysithea's Atk and Dragon Fang. First Hades gives Dragon Fang a count of 3 instead of 4 and then Time Pulse lowers that by 1 at the start of the map. So now we have Dragon Fang at count 2. Then Heavy Blade comes in so that Lysithea only needs 1 hit to get her special going. That's not all though because Hades gives you a +4 to attack if you initiate and a +6 if her special is up. Then we add in the +8 from Death Blow 4 and now we're at a total of +18. Add that to her atk which would be 59 and you get 77Atk. 77÷2=38.5 so the added damage you would have is 38-39. This is without any other outside buffs she could get from her teammates.

Lysithea is already strong and this build makes her stronger.
- Hades is just perfect with Time Pulse 3
- Reposition is a must for me. Can really work well with defensive strategies or to get eventual boosts.
- Death Blow 4 increase a lot her attack. She needs to stay cover in the enemy phase and destroy everyone after that. She needs always to attack first.
- Lull Spd/Res 3 can make some differences in a lot of situation. Probably you can use even a Chill Res 3, but taking down some speed can be really important with Lysithea.
- Time Pulse 3 with Hades can guarantee special attack every turn.
- Glimmer is better than Moonbow in her case. A +50% damage with her big attack Stat can be really strong. With Glimmer, a lot of people can considering putting Chill Res 3, but I repeat, with this build is better to guarantee more attack and just the necessary speed to take down enemies in your phase.
- The sacred seal Atk/Spd Bond 3 is for teams or people who play a lot defensive and with allies stick together. NY!Fjorm, Laevatein and others with link or bond skills can help a lot Lysithea in positioning and attack. So, everytime someone is near Lysithea.

Salt Thread (Book 4 Midpoint Banner)
So anyone salty about this banner? I feel like there’s someone. So spill all that salt…
I made this (+10 showcase, and who's gonna be next?)
I finally finished her, thank you Forging Bonds for making it easier to HM farm. Don’t…
D*MN IT
I LITERALLY SAID JUST YESTERDAY THAT I WANTED TO SAVE MY ORBS. Screenshot_20200603…
WHY NOW?!
Screenshot_20200603-231100_YouTube1200×1920 835 KB As one of my Awakening waifus, I…
Can I get an F for the Severa fans?
I’m sorry that you didn’t get Severa and that you’ll have to wait longer. But hey, at…
Read More