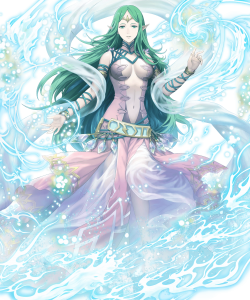 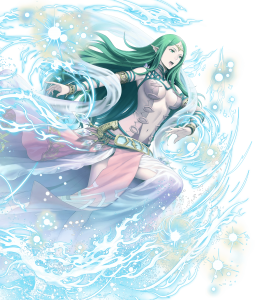 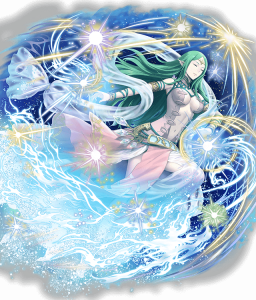 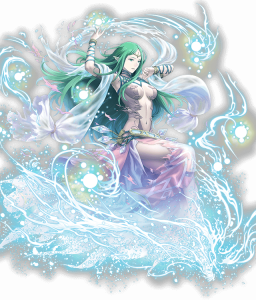 Protector of the Realm (Offensive Hybrid)

Passive B: Dive-Bomb / Near Trace Skills

Naga’s most alluring feature byfar lies in her exclusive Divine Fang+ ability, granting powerful offensive benefits to both herself and nearby allies through guaranteed follow-up attacks on the Player Phase and a helping of +6 Atk and Spd. Alongside the Worldbreaker ability of her fellow Astra Mythic Thórr, these bonuses go quite a long way in elevating the floor for Galeforce strategies — as well as that of other offensive strategies — as nearby allies suddenly become capable of wielding reasonable burst.

Additionally, Divine Fang+ also grants adjacent allies dragon effectiveness which, while mostly for flavor, has surprising relevance given that her season directly coincides with that of Duma and Seiros; for teams struggling to deal with their otherwise considerable durability, Naga can prove a readily efficient solution when coupled with Divine Fang’s other buffs.

Her combat ability received a much-needed boost through Divine Breath’s unique refinement option as well, most notably through the improvements on her number of stat enhancements and the ease in activating them: now, under the proper circumstances, Naga can reach a whopping Spectrum +14 all with generous ranges for having qualifying allies nearby. Coupled with her refined weapon’s Dragon Wrath effect for padded firepower, Divine Breath greatly aids her combat proficiency to actually reasonable levels (particularly when considering Divine Fang+) and somewhat bridges the gap from her extremely disappointing stat distribution.

The main issue, however, is that Naga is typically much better off as a battery for her allies rather than being used on the frontlines herself, so the majority of what her refined Divine Breath does is… honestly not all that useful. That being said, it does add a little bit of utility by granting dragon allies or units with dragon effectiveness (i.e, anyone buffed by Divine Fang) a supplemental Spectrum +3 during combat — it’s not much, but it’s something.

While restrictive in some respects, Naga does appreciate the flexibility in positioning alloted by her flying status, easing the risks of space pressure and offering unique options in Assist usage. Additionally, this grants access to the neat Near Trace line of skills and Dive-Bomb for simple synergy with Naga’s inherent Player-Phase heavy playstyle.

Naga has innate value to any Offense team in Aether Raids purely by merit of her Astra Mythic status, substantially elevating Lift acquisition in addition to a flat +5 HP/Def for every copy of her active. Although she lacked much utility outside of this prior to her Remix (which often made her a last ditch choice if you lacked any of the other Astra Mythics), Divine Fang’s newfound Player Phase potency helps make Naga actually relevant in competitive strategies, most notably Galeforce where hit counts are crucial for Special triggers.

Naga is restricted pretty harshly when it comes to skill availability by her dual flying and dragon classing. The former prevents her from accessing more powerful B skills should one have wanted to actually exploit her weapon’s improved damage ceiling, whereas the latter prevents her from contributing to Galeforce teams – the main setting where her buffs shine — beyond simply existing as dragons are unable of equipping the Special.

Despite canonically being one of the strongest figures in the Fire Emblem universe, Naga’s appearance in Heroes is extremely underwhelming from a statline viewpoint: even her best stats, Spd and Def, are barely decent in the broad competitive scene. She does, admittedly, have access to an abundance of in-combat stat enhancements from Divine Breath, but even then this merely helps her reach what is considered the baseline for modern units (which makes the fact that her refinement was so combat-focused even more disappointing).