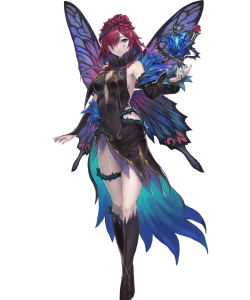 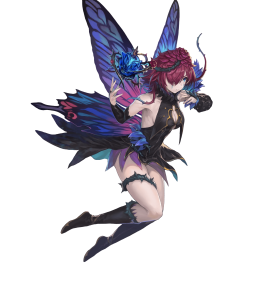 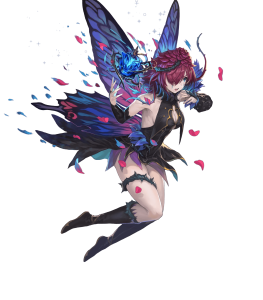 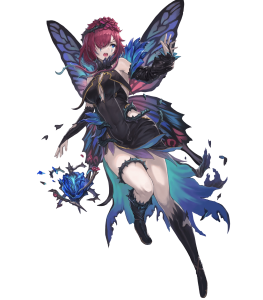 37/38 offenses are great, especially for a unit with only 151 BST. Players can easily fit Triandra into a more offensive or hybrid role, as she can deal high amounts of damage and consistently perform follow-up attacks, especially with a bit of help through her skills and support from allies. These offenses can also serve a supportive use, as she may be able to soak debuffs from the Bright Shrine, Chill Atk, and Chill Spd for Aether Raids Defense.

Flower of Sorrow is a simple, but solid personal weapon for Triandra. In addition to granting +3 Attack, it also inflicts -4 Def/Res on enemies in cardinal directions during combat. For Triandra, Flower of Sorrow is effectively a 21 Might weapon, which is great for such an easy condition. For Triandra’s allies, this can seem a bit underwhelming in comparison to weapons like Peony’s Flower of Joy and Mirabilis’ Flower of Ease, but it is very useful for Aether Raids Defense teams that have a mix of physical and magical attacks.

Frightful Dream is Triandra’s powerful Assist skill. In addition to granting another action to an ally that has already moved, it also inflicts -3 to all stats and the Guard status to enemies within cardinal directions of Triandra and the refreshed ally. -3 to all stats can easily turn the tide in favor of Triandra’s allies in terms of both damage output and survivability, and Guard is an excellent effect for preventing tanks and superunits from healing with Specials such as Noontime and Sol.

Triandra’s status as a Dark Mythic benefits her in multiple ways.

While not an evaluation of her as a unit, Triandra has an excellent base kit, making her a very low-investment unit for players that only plan on using her for PvE purposes. She has both offensive and supportive skills at base, making her naturally flexible as well.

With excellent offenses and supportive capabilities at her disposal, Triandra is a versatile unit capable of fitting a variety of roles. She does wonders regardless of whether she is built as support, offense, or a hybrid of the two.

Unfortunately, Triandra’s offenses come at a cost of horrifically low defenses. With 53 physical bulk and 59 magical bulk, Triandra is in great danger of being OHKO’d by both physical and magical enemies, so players must take caution to avoid frequent Enemy Phase combat.

Despite its advantages, being a Flier also comes with various disadvantages.