Community Posts with Keyword Ogma All 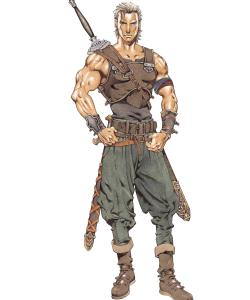 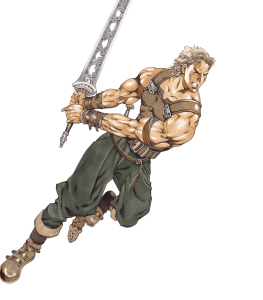 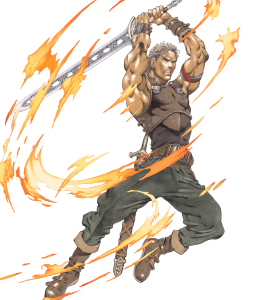 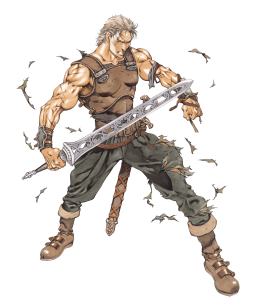 Ogma’s stat spread is typical of many sword wielding units. High Attack and Speed allow him to wreak havoc on the frontlines. These are his most desirable stats, both being his best choice of asset. Where Ogma deviates from the norm is in his HP and Resistance, the latter of which weighs in at just 13-- far too low to be useful. Instead, he relies on his solid HP to survive magical attacks.

Ogma’s strongest set sees him take the offensive with his excellent Attack and Speed. The skills featured here are mainly focused around boosting his own stats (while debuffing his opponent’s). Ogma also offers some team support through this build, making him a multi-faceted threat on the field.

Ogma relies on his Speed to get follow-up attacks and his Attack in order to trigger the Special charge effect of Gladiator’s Blade. Enemies with skills that guarantee follow-up attacks (Swordbreaker and Quick Riposte) are troublesome for him, so Sturdy Impact is chosen to prevent them from activating. Fury is a decent budget alternative.

With the Special acceleration from Gladiator’s Blade and Quickened Pulse Ogma will trigger his Special on his second attack, provided he can perform one. Bonfire is slightly stronger if Ogma is unbuffed, while Draconic Aura is better if Ogma has an Attack buff. Galeforce is an option too, giving Ogma the useful ability to retreat after combat or defeat a second foe.

Chill Spd plus a Speed asset help him to win Speed duels. He can also run Chill Def, although it’s only more effective if Ogma is receiving a Speed buff from teammates. Swordbreaker is a surprisingly effective budget option here, particularly if Ogma has an Attack asset.

His final ace in the hole is Infantry Pulse, which serves to turn Ogma’s teammates into demons with powerful pre-charged Specials. Ogma should use Rally Up Atk+ to buff his allies. Rally Def/Res is a cheaper alternative, suitable for defensively-inclined teammates.

Mercenary of the Heart (Mixed Phase)

Ogma is your classic swordsman, with high Attack and Speed, and lower defensive stats. This set works well on many similar units and Ogma is no exception. It’s designed to make him a threat on both phases and allows Ogma to sweep when his HP is low. However, it should be noted that many other units can run this set much better than Ogma (Karla, Ayra, Karel, Fir, Soleil).

The key to make this set work is the combination of a Slaying Sword and Quickened Pulse. This lets Ogma begin his very first combat with a Special, whether he is attacking or defending. Distant Counter lets Ogma handle archers of all colors and green mages. Once Ogma has engaged one enemy in combat and taken some damage, Wrath kicks in and not only boosts Ogma’s damage but gives him free Special charge at the start of every turn. Moonbow is chosen for its short cooldown and effectiveness against high-Defense foes.

Ogma’s choice of weapon refine comes down to the kind of buffs he’ll have. If Ogma is being buffed with Attack or Speed, then a +Def refine will allow him to survive better and hit back harder. If Ogma is being buffed with Defense or Resistance, he’ll want a +Spd refine to stop foes from doubling him. Instead of Distant Counter, Ogma is a great user of Fury. This is only effective when Ogma is paired up with other units who can handle ranged threats for him. Other options include Quick Riposte, which forces Ogma to fight on the Enemy Phase initially but gives him a much better chance to finish off foes.

Thanks to his high base HP, Ogma has some unique supporting choices. Infantry Pulse is a powerful skill and Ogma is one of it’s best users, but it only works when he’s teamed up with other infantry. However, Ogma can also make great use of a Drive Skill or Dual Spur on teams with a mixed composition. He is best with a simple Rally skill, but can also use Reciprocal Aid to restore HP to allies and more easily activate Wrath.

Thanks to his great Speed and Defense, Ogma is a capable anti-armor unit. What makes Ogma so great at this role is his Speed, which gives him a distinct edge over traditional slow armor and allows him to score follow-up attacks on armored units that aren’t using Swordbreaker, Wary Fighter, or Thunder Armads.

This set is designed to let Ogma tear through full teams of armor, thanks to Special Spiral and his Armorsmasher. Special Spiral ensures that Ogma can always trigger his Special after the first round of combat. The choice between Glimmer and Noontime depends on player preference: Glimmer lets Ogma handle blue armor better, while Noontime keeps Ogma sustained, offsets Fury damage and lets him play more defensively if he chooses.

Choice of refine is also down to player preference: If Ogma has an Attack boon, he will need a Speed refine, otherwise he should go for Defense. Fury is very helpful on this build, giving Ogma some much-needed Speed and Defense. Close Def on his seal slot also boosts Ogma’s defensive capacity and gives him a Resistance boost when fighting dragons.

Ogma is a great user of Infantry Pulse thanks to his high base HP, but on mixed teams he can use any Drive or Spur skill well. He can also make use of Reciprocal Aid to support teammates, but otherwise should pick up a Rally skill of the user’s preference.

Ogma is an iconic unit and appears in Fire Emblem Heroes as a red sword-wielding infantry. Not only is he responsible for birthing his own archetype in the main series titles, but Ogma has also long been a benchmark of standards for the common sword infantry in Fire Emblem Heroes. Few units have a statline as optimized as his, although others have since been granted more stats overall.

His offensive statline is great, giving him base 35 Attack and 34 Speed. He is no slouch when resisting physical blows, boasting a titanic base 47 HP, and decent base 28 Defense. He has just one statistical weakness: his Resistance. At just base 13, he takes heavy damage from sources of magical damage such as mages and dragons. Although his HP helps to mitigate this, he is still weak to these units.

All things considered, Ogma is a worthy investment candidate for players. Being available at three and four stars, he is common and easy to merge. Although units like Fir and Hana remain stiff competition in this regard, Ogma’s offensive set differs from theirs, and his statline focuses in other areas. When given the proper support, Ogma can clean up the battlefield.

Ogma wields 35 base Attack, the standard when it comes to raw power. Alongside his base 34 Speed, Ogma has great offensive stats. His base power is much higher than Fir and Karel’s and is one of the few sword-wielding units to combine great offensive stats with solid physical defense. He is less reliant on Special triggers than they and is more effective against units wielding Guard. Ogma’s great Attack is the basis for his Slaying/Wrath and anti-armor skill builds.

What sets Ogma apart from units like Fir and Hana is his physical defense. Base 47 HP and 28 Defense allow Ogma to survive hits that his competitors can’t. More importantly, high HP gives Ogma the option of running Panic Ploy or Infantry Pulse to debuff opponents or support other allies. He has the highest overall physical Defense of all offensively inclined swordsmen.

Ogma’s crippling weakness is his Resistance, which is just base 13. This makes Ogma very weak to mages and dragons. He needs Distant Counter to KO mages but is often OHKO’d by them. Ogma is very easily hit with Ploy skill debuffs, and even though he can boost his Resistance to 21 with a weapon refine and boon, it’s still better to invest in his stronger stats. Although Ogma really only has one weakness, it hampers him enough to disqualify him from the higher tiers, and severely hurts many important matchups. 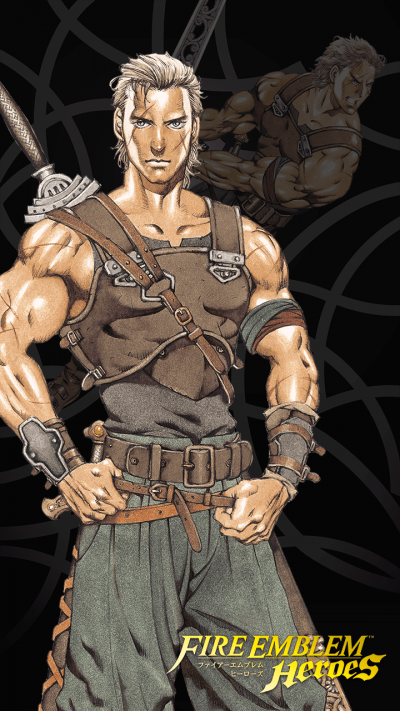