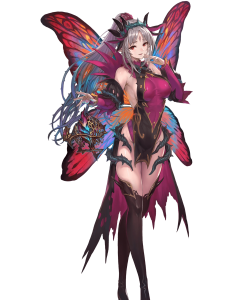 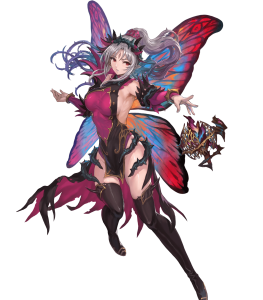 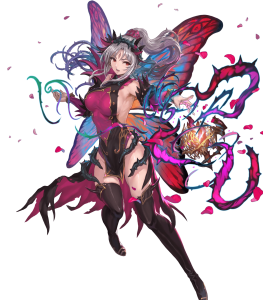 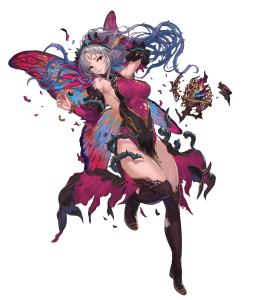 Plumeria’s exclusive Sweet Dreams stands as the core of the dark fairy’s exceptional supportive potential, operating as a much more powerful version of Sing and Dance.

While the in-combat buffs it applies may not be especially potent, her Flower of Plenty remains a solid accompaniment to her arsenal nonetheless (as Attack and Resistance are both key stats in Aether Raids), and its generous radius enables Plumeria to continue supporting her allies even after refreshing them with great ease.

Even without accounting for the various intricacies and nuances of her unique skills, Plumeria holds a great deal of value simply by merit of being a flying refresher, as this lets her grant extremely useful mobility-based support through skills like Ground Orders and Guidance; this makes her team’s movement and positioning much more flexible.

Plumeria possesses an extremely min-maxed statline, boasting particularly strong Attack and Resistance stats -- not to mention access to a four-point Attack Asset to boot. Her Resistance is useful for both wield debuffing skills to great effect and magic tanking, and her high Attack does give the flexibility of running more damage oriented sets. With enough investment or through the use of skills like Fury, Plumeria can also utilize these high values to draw away enemy sources of Chill Atk and Chill Res from her allies.

Plumeria’s status as an Astra Mythical Hero is a great boon to her viability for many reasons:

With the vast majority of her stats being allocated towards her Attack and Resistance stats, Plumeria is left with extremely poor Defense and equally disappointing Speed. This combination leaves the dark fairy quite susceptible to physical damage -- even if she were to somehow escape an outright OHKO from a physical damage dealer, they would still be exceedingly likely to double and kill her then.

Although Plumeria’s flying status is a considerable advantage, it also comes with the detriment of being weak to opposing archers, who are essentially guaranteed to kill her coupled with her low Defense; remaining cautious of such opponents is crucial to ensure Plumeria isn’t preemptively killed. This also makes mage tanking sets incredibly risky if an archer is also on the opposing team