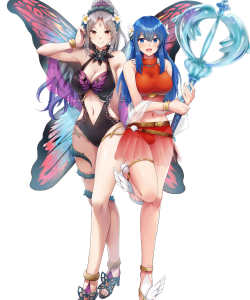 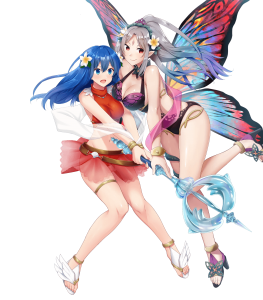 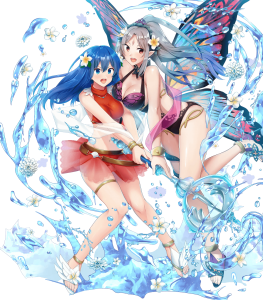 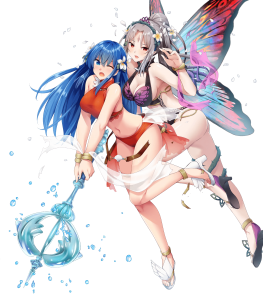 ok so... resplendents for seasonals when? (Galeforce)

The Sea-Blossom Pair’s exclusive Dolphin-Dive Axe may seem rather simplistic, but it certainly remains quite powerful; combining effective damage against sword, lance, axe, and armored threats (which ultimately comprises a significant portion of the overall cast) with Canto helps Caeda and Plumeria maintain a fearsome presence through high damage output and stellar mobility. Dolphin-Dive Axe’s base Attack+3 and additional +5 Atk/Spd/Def/Res for basically existing further supplements their combat prowess, altogether imparting the duo an impressive offensive edge.

In addition to improving scoring in Resonance Battles, Caeda/Plumeria bring immense utility through an on-command refreshing effect to the nearest highest HP ally within two spaces, as long as they are from Fire Emblem: Mystery of the Emblem or Heroes. While this has already been seen before (see: Halloween Tiki and Ninian), the Sea-Blossom Pair can leverage this with much greater potency given their Galeforce access to efficiently chain multiple actions — and unlike Tiki, the ability to apply this effect on refreshers is much more useful given that it can target actually powerful ones in Peony, Plumeria, Triandra, Mirabilis, and their respective alts.

Activating Summer Caeda and Plumeria’s Harmonic Skills comes with the added benefit of applying Resonance: Blades on themselves and any allies from their respective titles for bonus firepower. Lastly, their Harmonized Hero status is quite handy from an Aether Raids Defense viewpoint as they can enable the Duo’s Hindrance structure to prevent challengers from accessing Duo or Harmonic Skills of their own.

Caeda and Plumeria’s Speed is exceptional; with a base value of 42, they can challenge even the fastest of foes and perform follow-up attacks with great consistency, especially when equipped with their native Flow Refresh as this allows them to shut down any follow-up negation effects that would have otherwise hampered their performance. While 33 base Attack may not be quite as impressive in comparison, the +8 Attack and effective damage they can obtain from their PRF makes it a perfectly workable baseline for Caeda/Plumeria to build upon.

Summer Caeda and Plumeria greatly appreciate the three-tile movement granted by their cavalry status as this allows them to easily place pressure on the opposing team, in addition to pairing nicely with their Canto effect for maximum mobility. Being a melee cavalier specifically also comes with the advantage of having partial access to Null Follow-Up via Flow Refresh on top of the Lull skill line shared by all cavalry units.

Their Harmonic Skill can prove exceptionally advantageous when used properly, but using it in Aether Raids Offense consistently may prove rather tricky due to how common the Duo’s Hindrance structure is on enemy Defense maps — especially in the higher echelons of the mode. Thus, it’s best to not rely too much on the effects of their Harmonic Skill for successful Offense runs unless you’re fully confident in your ability to destroy structure quickly enough.

Grants【Resonance: Blades】to unit and allies from the same titles as unit. Grants another action to ally with the highest HP that is within 2 spaces, has already acted, and is from the same titles as unit (excluding unit). (Allies with Sing or Dance can be granted this effect as well. If multiple units meet the conditions, effect will not trigger.) 【Resonance: Blades】 Grants Atk/Spd+4 during combat for 1 turn.