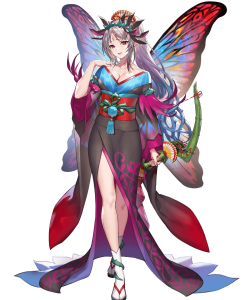 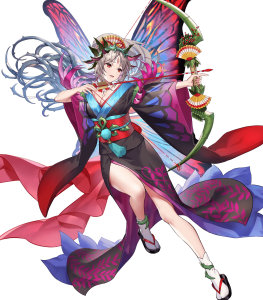 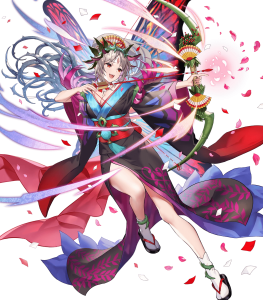 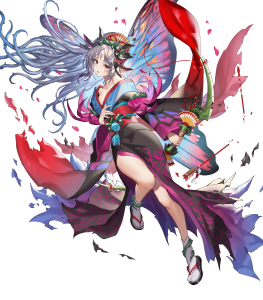 New Year Plumeria retains her original iteration’s exclusive Sweet Dreams, a powerful (and directly improved) version of Sing and Dance that combines refreshing, buffing, and debuffing utility all into a single skill.

The varying effects of this skill -- while not particularly impressive individually -- altogether help Plumeria provide her allies a significant stat advantage against nearby foes on top of the crucial ability to take another action; this ultimately stands as the center of the dark fairy’s standout support capability. The wide radius for Sweet Dream’s debuff also makes it quite simple for Plumeria to quickly debilitate multiple foes and enable debuff-dependent units (e.g. Broadleaf Fan users), though most allies will appreciate this assistance overall.

Her unique First-Dream Bow complements the dual buffing and debuffing utility of Sweet Dreams quite well, applying an in-combat boost to her allies’ Attack while detracting from that of any opponents within three spaces of her; this translates to a solid boost to her team’s raw firepower and durability, provided they’re in range.

Although this is not the crux of her overall capabilities and can easily be replaced if so desired, First-Dream Bow certainly comes as an appreciable addition to New Year Plumeria’s skill set and helps supplement her worth over other refreshers.

Being a flying refresher comes as an immense boon for New Year Plumeria, as it further adds on to her supportive value by being able to grant useful movement-based support through skills like Ground Orders and Guidance; this helps her team approach enemies from more favorable positions and enables strategies that would otherwise not be possible.

New Year Plumeria’s statline is yet another callback to her original version and remains practically identical, varying only slightly across the board. To that end, her Attack and Resistance yet again feature strong base values -- in fact, they’re actually even higher than that of her base iteration. This renders the dark fairy well adept at tanking magical damage, leveraging further debuffing skills (such as Sabotages), and dealing decent chunks of damage, offering some wiggle room in terms of her build.

Similarly to how she kept her base version’s high Attack and Resistance, New Year Plumeria also showcases abysmal values in both Defense and Speed; this combination removes any possibility of her being able to handle physical threats without prior precautions. The impact of her low Speed impacts her magical tanking ability as well, given that Plumeria’s susceptibility to follow-up attacks places her at risk of allowing quick Special access for her foe.

New Year Plumeria’s flying status comes as a great boon to her performance from a supportive standpoint -- but from a combat standpoint, it’s a much different story. With overall poor skill accessibility (most notably in terms of potential B slots) and a weakness to archers, her combat ability suffers compared to her non-flying counterparts.

That being said, the fact that Plumeria’s support potential is so good renders this inconsequential for the most part, barring those wanting a refresher with a more offensive lean.