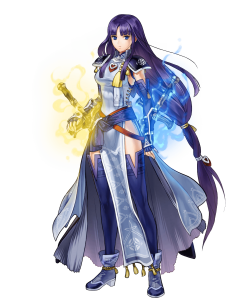 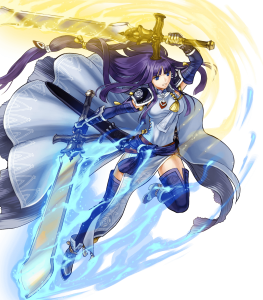 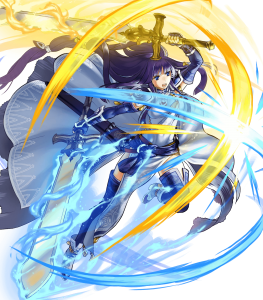 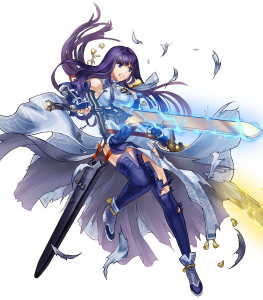 Passive B: Wings of Mercy / Vantage / Hit and Run / Drag Back

Coming with an intimidatingly formidable weapon in Ragnell•Alondite and obviously pre-built with a certain strategy in mind, Altina is comparable with her similars in other movement types—Reinhardt (WT) and Keaton. For those unfamiliar, this means the Dawn's Trueblade can perform second consecutive attacks in both enemy and player phase, giving her amazing power, offensive flexibility, and ingenuous ease of use especially with Vantage. Unlike Keaton and Reinhardt, however, Ragnell•Alondite comes with Distant Counter built-in, enabling her to run her other unique skill, Ashera's Chosen. This serves to not only spare you valuable fodder, but also bolster Altina's own strength as Ashera's Chosen takes away her flying weakness and gives her a great offensive boost equivalent of Atk/Def Solo.

All of these qualities would make Altina a fine frontline unit on her own, but the fact that she is an Astra Mythic Hero also gives her much utility and usefulness in Aether Raids. In particular, unprepared defense setups may melt to the very force that is Altina's default Vantage build, and Altina herself offers utility in the form of direct Lift increases as well as special stat boosts. For an Astra Mythic, Altina also does not suffer from the extremely balanced stat distribution and bow/dragon weaknesses that plague her neighbor Naga, making her less likely to be a liability in terms of teambuilding.

Overall, as the second entry in the line of Astra Mythic Heroes, Altina most definitely impresses, and by her lonesome qualities, she is a very simple but effective combat unit. Keep in mind that she is just as vulnerable to checks and counters like any other hero (in particular, faster enemies can do major damage if they survive a Ragnell•Alondite onslaught, not to mention bulky blue foes), and her radiance shall shine through in most environments of your choosing.

Like Keaton and Reinhardt (WT) before her, much of Altina's offensive value stems from her unique weapon allowing her to make consecutive attacks twice during both enemy and player phase. This serves to inflict a great single-strike damage to most foes as well as effectively hasten Special activations.

Ragnell•Alondite is fortunately complemented by Altina's incredible Attack, resulting in nice damage output on a large range of enemies. Altina's resulting Attack also makes Heavy Blade activation fairly recurrent. Her defensive stats don't give Altina much room for many weaknesses either all at reasonable values, and her physical tankiness is even improved by Ashera's Chosen.

Altina's very presence in Aether Raids Offense matches means she directly pads your potential Lift during Astra season. Additionally, she increases the HP and Attack of Astra-blessed or seasonal Legendary Heroes by a substantial +5 and +3 (respectively) per copies of herself, which a nice supportive quality from an offensive Hero such as herself.

Finally, unlike the only other Astra Mythic, Naga (at this time of writing), she is also significantly less likely to be a liability. Her lack of weakness to Thrasir's Ífingr as well as her own hyper-offensive qualities and nicely distributed stats means she can greatly contribute herself. Altina can even go as far as acting as a team carry: her Vantage build can potentially allow her to dismantle entire Aether Raids Defense setups by her lonesome. This, in addition to basically being required in Astra season for significant Lift increases, can help you free up team slots for other bonus and support allies when necessary.

As a Mythic hero, Altina is available every few months in Legendary and Mythic banners. This availability is burdened further by Altina sharing her red coloring with two other possibly undesirable units, meaning getting copies of her—let alone a single one if luck isn't on your side—may be a cumbersome task to some.

Altina's fantastic stat distribution comes at the cost of a largely ignorable Speed, which is further made irrelevant by her weapon's Speed penalty. Naturally, she is vulnerable to follow-up attacks. Though Ragnell•Alondite does a neat job at curbing this in practice—as proper setup will allow her to defeat most foes in single counterattacks or initiations—she nevertheless may run into miscalculations against faster enemies that do survive the single strike.

Well-prepared opposing teams with a form of Hardy Bearing (through weapons like Dawn Suzu or the Sacred Seal) and cancellation attacks (such as Firesweep weapons or staffs with Dazzling Staff effects) can apply massive pressure against the Vantage build quite easily.

This is a generalist build for Altina. Ragnell·Alondite is Altina's Meisterschwert, and Quick Riposte helps her attack four times when the foe initiates combat if she has high HP. Bracing Stance 3 and Fierce Stance 3 are for increased stats if the foe initiates combat. Def/Res Oath grants Altina a boost in her Defense and Resistance if she starts off the turn adjacent to an ally.

This is mainly an Aether Raids Player Phase build, accounting for the ever growing list of debuff and vantage type units of out there.

This will allow Altina to support from the back of the map with her ploy skill, warp to the location of any injured ally on the map, and gain two attacks on a foe before they can counter.

An interesting but expensive build designed to allow Altina to be more enemy phase first, then hit any survivors in player phase thanks to threat atk/def 3 if any are in range. With the res boon at 39 she can effectively use shield session 3 not only to bait mages and other units with 9 more def/res for a total of 39 def/48 res in EP, but will allow her to use said stat for more damage towards her proc output allowing 19 more damage on the first enemy action/attacker and not having to worry about panics and skills making visable buffs useless till her turn comes up with the threat atk/def 3 skill. With enemy survivors within 2 spaces, the threat skill takes away 5 atk/def and also gives Altina 5 atk/def to effectively deal 10 more damage than normal per hit depending on the target for 20 more damage on the affect target(s) and allows Altina to have a nice bulk of 44 def/48 res and 53 atk for the next first enemy action in the EP.

whit the help of a refresher Altina will be able to trigger Galeforce in one turn, and Atk/res push 4 (atk/res push 4 once it exists) recoil putting her safely in vantage range for the enemy phase clearing up.

Ashera's Chosen is not run, even if it does have the benefit of increasing her mixed bulk and makes her not frail vs arrows. But this build intend to no letting any enemy ever get the possibility to attack her. and there for atk/___ push 4 is run for 1 more dmg and more importantly whit the presumed 3 attack Altina will perform on player phase she will have taken 15 recoil dmg and put her in vantage range.

Solid res stat that makes using ploy skills a breeze but C is overall flexible for the player's desire. She already comes with a completed kit essentially so all you really need is Reposition and a C skill if you don't like Atk/Def Oath but I generally like Def ploy. Heavy Blade let's her get +1 charge against foes with any guard effects on them just so she isn't being completely walled from getting charges.