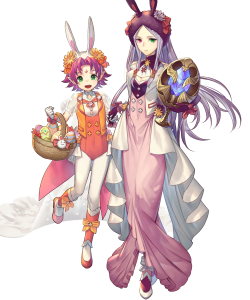 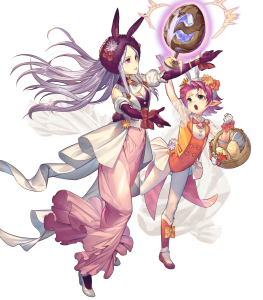 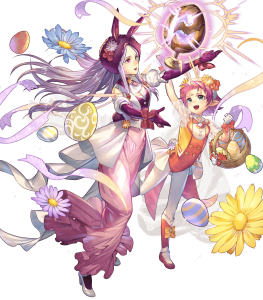 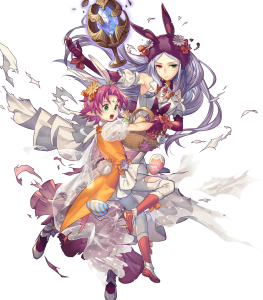 Spring Idunn is inherently advantaged as a Duo, as her status as one grants her access to an incredibly powerful Duo skill, in addition to a Duel effect for scoring in modes such as Arena(Although Idunn benefits little from this due to her high Base stat total)

Idunn’s Zephyr Breath is also an amazing prf, inflicting atk -6, neutralizing her stat penalties, and negating the foe’s follow-ups during combat, provided she is within 2 spaces of an ally, or a field buff is active on her.

In addition to these boons, Idunn’s statline is simply excellent. Her lowest stat is her middling 26 Speed, but due to the effect of her Zephyr breath, she’ll hardly notice it. Idunn not only hits hard with her base 37 Attack, but is also incredibly tanky due to her relatively high HP and great Defense and Resistance, and on top of this, both of her Defensive stats receive a 4 point increase instead of the usual 3 as an Asset.

While Idunn’s Duo skill allows her to circumvent this weakness to some extent, she’s still highly susceptible to effective damage when her Duo skill isn’t active due to her status as an Armored Dragon, leaving her weak to both Armored and Dragon effective damage.

As an Armored unit, Idunn’s base mobility is quite low, and as such she will struggle to move across the map without team support such as Armor March or a Guidance Flier.

This build is based around a Verðandi soiree berkut and a nuker with some phisical bulk but abysmal magic bulk pure support build, where her role is to tank the hits of magic users while the nuker causes losses on the enemy team. Thanks to Zephyr breath and distant ward, she can survive a lot of magical attacks while protecting her team. Vengeful fighter allows her to defeat the units she encounters while also charging her special for some hp restoration.

Also, since her role is a pure Far save unit, she greatly benefits from the bond skills, which works great as a seal skill. The only downside I see in this unit is the lack of movement she has. To mitigate this, she runs pivot, so she can put herself in place to protect in the best case scenario, both Soiree Berkut (or any phisically bulky dancer in the team, since other refreshers like Hoshidan Summer Xander can also do the trick if Soiree Berkut isn&amp;#039;t on the team) and the nuker, or in case that is not possible, at least one of them.

This build has a problem, though (the same problem many Save builds have), which is how expensive it is. Far Save and Distant Ward are difficult skills to get (distant ward could be changed for distant counter if needed, which is a lot less difficult to get), so, getting such a specialized build might become a hazard when there are other units that will get you good utility with a lot less. Still, when needed, this build is quite efficient at what it does.

This is my best attempt at an Enemy Phase build. I ended up going in DEEP for Idunn and only managed a -atk +Res copy for my effort. The standard DC/SF set wasn't working since she was super chained to QR and like, everyone wants that seal. So I went back to her base Vengeful Fighter and built her kit around that. Since her weapon wants her near allies anyway, Def/Res Bond just makes her even HARDER to kill, but any EP seal works. Fierce Stance is a big standout as well. She can run basically any special, but things with Odd cooldowns just get wasted so I'd skip things like Aether, Sol, Luna, Iceberg and the like.

Def flaw. Why. Why is this game so cruel qwq.
Anyways.
If you maybe randomly got a spare brave micaiah, you can have Atk/Res bond 4 on duo Idunns A slot. Distant counter is the most preferred skill by others, but then she need another type of build.

Iceberg because why not make use of that scary res, and Def/res bond to increase tankiness, since the enemy cant double her due to her weapon. Her weapon is essential since her speed isn't that great.
The only drawback of these nice bond skill buffs is that she needs to be adjacent to an ally, so i leave her super cozy in the middle of my other inits in AR. The close and distant guard skills on her allies is also a good choice.

Duo Idunn is an armor monstrocity on a whole new level. Just by having an ally within 2 spaces or active buff up she gets the standard Idunn effects and more. 6 attack penalty on the enemy during combat and follow-up negation are just making her harder to be obliterated.
Having her Duo Active skill also makes things easier for her since it provides +6 Def/Res and Armor and Dragon Effectiveness immunity for 1 turn to units on a 5x5 grid where she is in the middle. Its quite possible that she would be the reason why people will start using Duo buildings (Duo's Indulgence for Offense and Duo's Hindrance for Defense) on Aether Raids.

Reasons for the build I recommend.
Defense Asset: Having defense for an Asset is the best choice because she gets 4 more defense making her be at 41 defense on 0 merges which is the same amount of resistance she has on neutral.
Aether: Boosts the damage output Idunn can deal and provides her sustainability within the match. Compliments very well with her Special Fighter.
Distant Counter: General usage to cover ranged attackers. You really want to maximize the adaptive damage effects that dragon units have.
Special Fighter 3: Its a great skill to use on armor units that are general fast or have ways to double on an enemy.
Threathen Attack/Res 3: A skill that lets you get buffed and actively debuff enemies nearby. Goes very well with her weapon especially when she is not within 2 spaces of an ally. Alternatively Threathen Attack/Def 3 is fine also.
Quick Reposte 3 Seal: Her only way to double during enemy phase. Goes very well with her Special Fighter since it does not provide and follow-up guarantees.
Assist skill: Swap is generally the assist to go for armors. Resposition is fine and Pivot is decent when using armor units on autobattles.