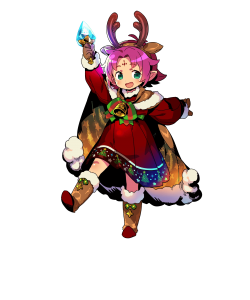 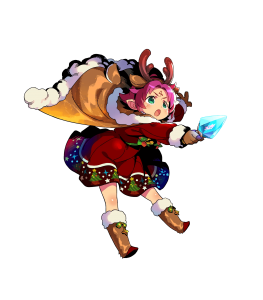 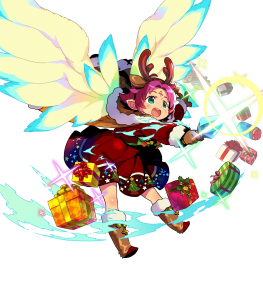 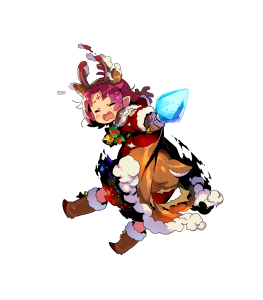 Fae retains her general stat distribution compared to her infantry counterpart, albeit with much more stats to work with due to being a Gen 2 Melee Armored Trainee. The choice of IV heavily hinges on the role that Fae is playing in her team, pure Enemy Phase or Mixed Phase.

This is a tried and tested build that is used by many armored units with access to innate Distant Counter. Fae using a Dragonstone means that she will be able to inherit Lightning Breath to leverage this cookie-cutter build.

For IVs, the ideal set is +ATK/-SPD. Going for the extra Attack is crucial for Fae to boost her offensive presence in the Player Phase. Due to having 2 skills that largely ignore Speed checks (Bold Fighter and Quick Riposte), taking a hit in Speed for more offensive power is a worthwhile trade.

The crux of this build is in Passive B and Sacred Seals; Bold Fighter gives Fae the offensive power in the Player Phase with the guaranteed double, while Quick Riposte does the same in the Enemy Phase provided that she is above the health threshold. Bold Fighter also provides Special acceleration for Fae, allowing her to consider higher cooldown Specials in the Player Phase.

Steady Breath has a slight edge over Warding Breath due to Fae’s slight inclination towards Resistance, which means that going for Steady Breath allows Fae to be a better mixed wall in the Enemy Phase. Another potential candidate that is worth considering is Death Blow, which increases Fae’s offensive power during  Player Phase, which Fae might actually prefer due to her lower Attack compared to her competition like Fallen Robin (M).

The choice of Specials would depend on the focus of the build. For a more Enemy hase-focused build using Steady Breath or Warding Breath, Aether would be the go-to option as she will be able to activate it in a single exchange during the Enemy Phase. For more PlayerPhase-oriented builds with Death Blow, one will be looking at a 3 turn cooldown special to leverage on the cooldown acceleration of Bold Fighter. However, due to Lightning Breath’s cooldown penalty , this pretty much locks her into Moonbow if she is looking into activating it every Player Phase.

Lastly, Armor March is very important to have for this build, as she values the extra mobility that could be used in the Player Phase. Fae does come with this skill by default, which makes running this skill an easy decision.

Winter Fae, our beloved best chicken, finally graced upon us as the second armored green dragon in Fire Emblem Heroes. Similar to many of the younger manaketes, Fae shares the same high base stat total as her armored young dragon contemporaries.

In terms of stat distribution, Fae chose to be a giant fluffball of defensive stat. 45 HP, 33 Def and 41 Res makes her one of the harder units to take out if the player do not bring any effective damage dealers. Furthermore, as dragons also hits for resistance, even her merely adequate 35 ATK could pack quite a punch.

The good news for Fae is that being armored grants her special access to many powerful skills, such as the Breath passives, and more notably the Fighter skills. However, being armored also means that she faces stiff competition to 2 units; namely Fallen Robin (M) and Surtr. Both of these units have considerably higher attack, and Fallen Robin (M) is the exact same class as her while sacrificing defensive capabilities.

Fae’s archetype is very similar to Gwendolyn and Sheena; overwhelming the opponent with defensive stat and withering the opponent down. This is further supported by her boosted base stat total. However, being both armored and a dragon meant that her walling capabilities could be cut short due to effective weapons. This could be a potential problem due to the armor meta especially in higher arena thresholds.

At 45 HP, 33 Def and 41 Res, it is obvious that Fae placed a lot of resources in keeping herself alive. She will take most standard hits without much problem. The high Resistance also enables her to run Ploy Skills without much issue.

As an armored hero, Winter Fae can wield the highly desired armor skills: Bold Fighter, Vengeful Fighter, and Special Fighter. These skills puts Fae in an excellent spot to do anything that she wants, be it the standard Mixed Phase, or solely focusing on Enemy Phase.

Being a Dragonstone user meant that Fae is dealing magic damage on melee units, and adaptive damage on ranged units. This means that Fae will hit hard in most circumstances, as melee units usually have lower Resistance than Defense.

Being an armored unit meant that she is a prime target by armor-effective weapons. Furthermore, she is also have an additional weakness as a dragon. In particular, being a green dragon especially hurts as reds have the most accessible dragon killing weapons such as Falchion and Breath of Fog.

Fae’s speed is at an unfortunate 26. While she might be able to pass some Speed checks against the slowest of units, in most cases this rarely comes into play due to the armor exclusive skills.

If the foe initiates combat, Fae gets a +6 Def and +6 Atk buff from Steady Stance and Fierce Stance.
She also gets a +1 Special cooldown charge from Vengeful Fighter, making it easy to activate Noontime.
Noontime is there to ensure she stays above 50% HP and to make her difficult to kill.

Armor March is good if at least one other armor unit on the team, but if there isn't any, C skill is pretty flexible.

Support skill is up to player preference.

If you have a Surtr and are willing to give him up, you could also give her Steady Stance 4, giving her a +8 Def buff and helping her activate Noontime even faster.

W!Fae is a brick wall. Her overall bulk is incredible, and she is adorable! I gave her DC in order to maximize her versatility, although I am still waiting for a BF fodder. VF works well with this build in the majority of defensive situations. It's difficult for red swords and mages to deal a significant amount of damage to her when her stats are enhanced by buffs.

Atk/Def Bond 3 seal further enhances her defensive bulk and attack when adjacent to any ally.

Effective dragon killers are practically her only weakness. When debuffed she becomes vulnerable to certain red heroes, although most still have a difficult time damaging her.

I have a Dragon Armor Emblem team (H!Myrrh, L!Tiki, W!Fae, Duma) that I mostly use to clear Legendary quests and occasionally Story Mode missions. My +3 W!Fae is the magical wall of the team. I used to use the Steady Breath + Bold Fighter + Quick Riposte combo on her, but Duma is using my Quick Riposte Sacred Seal for now. W!Fae mainly blocks magical nukes that the rest of the team is susceptible to.

This mainly uses most of Fae's main kit, but to get the full power of this build, you need some Ward Dragons/Armor units, and a Fortify Dragon/ Armor unit. With the buffs given to her from both of the bonds, Fae gets a +10 to her Def, and +5 to her Res. And if she has both of the Ward units within two spaces of her, along with the Fortify unit after they've given her buff, she gets an extra +8 Res/Def from the Ward, +6 in both of those from her weapon, then another +6 from the buff, giving her an amazing 64 Res and 57 Def! You can slap on Wary Fighter too to add even more power as most units won't be able to hit twice on this monster. Slapping on Glacies gives her 80% damage based on her Res, giving her an extra 51 damage! So, yeah. If you have her and wanna have some fun, make this build, and just, watch as she pretty much tanks anyone, including red mages and swords.

Even with a Res bane, Winter Fae can still be used as an incredible mage tank, and with a high/reasonable 45 HP at neutral, she can stand up to any of the Blazing/Rising/Growing special skills, which are feared in the area/aether raids, because of how much area those skills can cover. Distant Def 3 helps her tank more mages attack, to the point where it is possible for her to tank some RED MAGES. This build is more for an Enemy phase build, because of Vengeful Fighter 3 and Ward Armor, but if you want to make her even more destructive against mages, refine Glittering Breath for Resistance, so she can tank even more mages. Her resistance is, as of today, the highest in the game, so why not go all out and make her an absolute tank?

How long should an investment pay off?
We know that units become relatively weaker over time due to powercreep. Why is it ok…
Sacrifice L.Chrom +spd!?
I decided, contrary to my calculating style, to gamble on blues on the 8% with about…
"Do you think god stays in heaven because he too lives in fear of what he's created?" // The Duo that defiance Death and Fate itself// A Zelgius & Hardin Post-Refine Showcase
The day has finally come. I’ve waited for this so long and finally it happened:…
NY Keaton Build suggestions
Hi guys I build a NY Keaton for arena so I want that you tell me if I need change…
Ayra IV question
What IVs does my Ayra have?? Thanks in advance. Screenshot_20210506_221103_com…
Read More