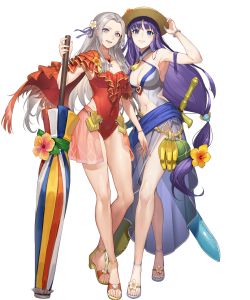 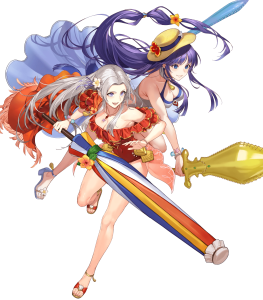 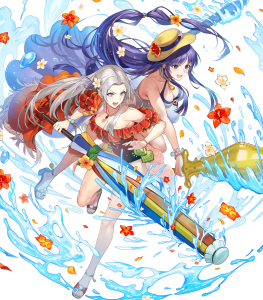 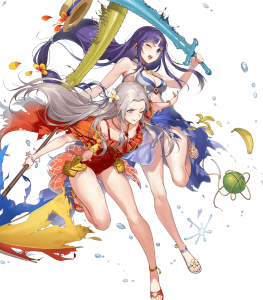 🦅: "Okay, so my teacher's in a duo ship with some lizard harpy and I need you to perform Operation: Jealousy with me" (Player Phase / Raging Storm Nuke)

So imagine Arden but with generally more exciting Special options (CD -1), roughly the same physical bulk (considering first-hit damage reduction), significantly improved magical resilience, and generally all usual extraneousness you can expect from a unit released in 2022+. Oh, and it's two empresses expressively lacking in armored garb and proper weaponry.

Indeed, much like their esteemed strong-and-tough predecessor, much of the charm of utilizing Edelgard/Altina is their strength to hit twice in both phases. This is something that not only grants them significant power when initiating and awaiting combat, but also feeds into other benefits such as charging Specials quicker thanks to double hits. The extra attack also means the duo is relatively uncaring of anti-follow-up effects that plague other armored units as they will likely confirm a kill upon double-attacking.

It's worth noting that this Brave effect is locked behind a couple of conditions that are fairly easy to check off in real gameplay:

As expected of a recently-released armored unit, Edelgard/Altina brings on an extra helping of pain and bulkiness with high stats in every category except Spd. 45 Atk, in particular, hurts healthily hard with the Brave effects of their weapon and makes them a force to be reckoned with whether used offensively or defensively. Their tanking capabilities are also nothing short of splendid with a statline of 46 HP / 43 Def / 39 Res, which only improves with Regal Sunshine's defensive effects and other forms of investment.

The fact that Regal Sunshade's effects don't gravitate to a particular phase allows Edelgard/Altina to crack some Brave-powered hurt whether initiating or awaiting combat. She has a ridiculous variety of tools available by default and thanks to her armored class whenever you decide on her focus and purpose from there:

If Edelgard/Altina finds opportunities to use their Harmonic skill and triggers it at the right moment, the anti-follow-up effect and handy stat doubler bonuses can blindside the enemy in just a single turn. This is, fortunately, an unimpeded scenario in Summoner Duels, whereas in Aether Raids, they will often have to deal with Duo's Hinderace as an annoyingly common but surpassable obstacle by breaking it or strategically defeating all opposing Duo/Harmonic enemies.

Miscellaneously, the fact that the Harmonic duo is associated with Three Houses means that Edelgard/Altina can splash in with Dorothea/Lene's own Harmonic effect: also an additional action on top of their Dance. Combined with Raging Storm and Galeforce, this gives them a grand total of five extra actions whenever a single turn calls for it.

Regal Sunshade's Brave effect (and Assault Troop's additional movement to a lesser extent) is dependent on the number of enemies positioned within 3 columns or rows centered on Edelgard/Altina. Unfortunately, like most things enemy-dependent in this game, ideal situations are not always guaranteed and can significantly mess up Edelgard/Altina's summer groove if you're always banking on the Brave effect being active, or whether the enemy team is optimally laid out for your convenience.

Every effect on Regal Sunshade, except for the weapon's innate Special cooldown -1, is locked behind Edelgard/Altina keeping themselves above 25% HP. This is pretty much a given at the start of battle and it's easy to write it off as "if unit exists, beachtime magic happens".

However, considering some builds and important matchups expect them to take on a large amount of punishment in single sittings, being careless with this eventually results in a far, FAR less effective unit at low health.

As usual, armor-effective weapons like Thani, Moonlight Drop, Destiny's Bow, and the generic armorslaying series will quickly do the empress duo in, though in their favor, they put up a fairly good fight against those with the defensive benefits of Regal Sunshade as well as some nasty two-hit retaliation whenever they (likely) survive. Don't expect the summer empresses to somehow turn heads against high-Def blue enemies or those that can somehow survive and counter kill back, like Ascended Idunn, either.

Grants Atk+6,【Resonance: Shields】, and 【Bonus Doubler】to unit and allies from the same titles as unit for 1 turn.  【Resonance: Shields】 Grants Def/Res+4 during combat and the following effect for 1 turn: "During unit's first combat in player phase or enemy phase, foe cannot make a follow-up attack."  【Bonus Doubler】 Grants bonus to Atk/Spd/Def/Res during combat = current bonus on each of unit's stats for 1 turn. Calculates each stat bonus independently.