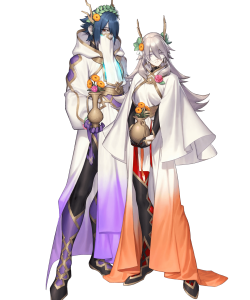 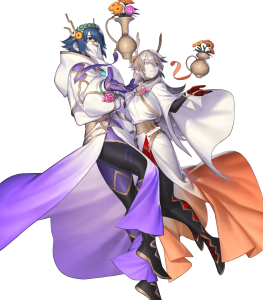 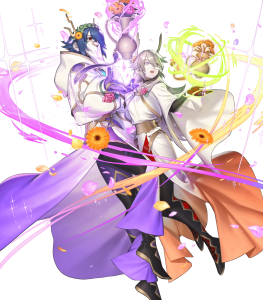 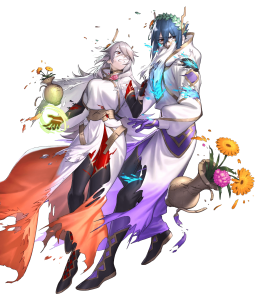 Valentine’s Líf and Thrasir are defined by the varied effects of their exclusive Þjálfi. Packed with guaranteed follow-up attacks, a method of partially bypassing damage reduction, and a massive helping of in-combat stat boosts, the Undying Ties Duo benefit from overwhelming offensive consistency—all on top of an easily enabled activation requirement.

Even Þjálfi’s main caveat—a whopping 20 points of chip damage to the nearest ally within three spaces—isn’t really that much of a detriment and can even be used to one’s advantage to trigger low HP-dependent abilities like Vantage, as well as Líf and Thrasir’s own Duo skill.

The Undying Ties Duo can fortunately leverage the effects of Þjálfi to great effect by merit of their phenomenal base Attack; with a base value of 39 in addition to a four-point Asset, Valentine’s Líf and Thrasir can quickly chunk high amounts of enemy health. On top of this, they also have sufficient bulk to take an enemy hit or two without running the risk of outright dying.

Líf/Thrasir’s status as a Duo Hero remains a great boon in their favor for a number of reasons. Beyond their unparalleled scoring potential in Colosseum modes, they can also enable the usage of Duo-related structures in Aether Raids—most notably, Duo’s Hindrance given their ability to fit right into cavalry lines and exceptional offensive capability.

Their own Duo skill is an added bonus for free chip damage and debuffs on nearby foes, but is not necessarily a central aspect of their kit.

As a cavalry unit, Valentine’s Líf and Thrasir have the advantage of exceptional mobility and reach; with an effective five-tile range, the pair can easily impose strong offensive pressure. This also lets them fit right at home alongside other mounted allies via class-exclusive buffs.

Líf/Thrasir’s disappointing base Speed of 25 renders them heavily reliant on Þjálfi’s built-in follow-up attacks to consistently double, even with the supplemental +6 Speed boost this weapon provides. This, in turn, makes foes who can bypass this effect—most notably, those equipped with Null Follow-Up—incredibly crippling as they quickly neuter much of the duo’s combat effectiveness.

Being a cavalry unit imposes some restrictions on Valentine’s Líf and Thrasir, such as hampered mobility by certain terrain, a debilitating weakness to effective damage, and a lack of good skill accessibility outside of the Lull skill-line.

Show off you summons! (Ninian: Ice-Dragon Oracle)
Well… I summoned till the spark and got NOTHING! Not a single 5* focus. Just a wild…
Godlike Reflexes: Shield Pulse or DR?
I’m wondering which B-skill ultimately syncs better with Godlike Reflexes, Shield…
The Bunny bites back
Hi everyone! My Panne wasn’t getting much action lately, and I knew I had to Spice…
How good is L.Lilina right now?
I’m considering pulling a bit of red on the coming 8%. My main place for her will…
Legendary Ninian: Ice-Dragon Oracle
https://www.youtube.com/embed/X97OeZyik0Q 61 posts - 33 participants …
Read More