Should You Pull - Desert Mercenaries Edition 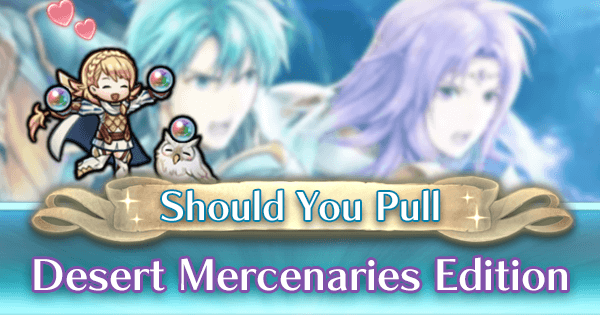 This is a standard four unit banner, meaning that the odds start at 3%. As there is a unit of every color, the odds for pulling on each color are pretty good, though slightly less so than a three unit banner.

Despite having a significant advantage over her direct competition in terms of BST, Tethys’ statline remains quite lackluster, with both her low base Attack stat and poor physical bulk preventing her from acting as a strong solo combatant; this consequently limits her build flexibility greatly. That being said, the enchanting performer’s statline does come with its own share of strengths, most notably her base Speed of 35 that allows her to deny enemy follow-up attacks relatively frequently. When capitalized on alongside her formidable magical bulk, Tethys can potentially distinguish herself from her contemporaries as an effective check to incoming magical threats with the proper support and investment.

Tethys stays true to her performance in Fire Emblem: The Sacred Stones and boasts favorable values in Speed and Resistance, being quite similar statwise to her predecessor Performing Olivia but with much more overall bulk. This combination makes her well-suited for an anti-magic role to grant her some much-needed combat utility. Aside from such a role, though, Tethys fails to stand out in comparison to other refreshers as her low Attack restricts her usefulness as a combatant heavily, thus diminishing her worth to revolve mainly around Dance and not much else. Be that as it may, Tethys’ status as a refresher nonetheless grants her a tremendous amount of overall utility as the ability to grant an ally another turn is invaluable, and will often mean the difference between victory and defeat.

Despite his rather unassuming outward appearance, Ewan’s overall statline certainly packs a punch and enables him to consistently output significant amounts of damage, most notably for its massive Attack stat of 37. Combined with his access to a four-point Attack Asset and weapons like Rauðrblade, Ewan can quickly accumulate an impressive amount of raw firepower and present a formidable offensive threat in both phases with the proper kit. His great Resistance stat and relatively decent Speed stat further solidify his combat prowess, with his main weakness being his poor physical bulk; he does, however, have just enough to avoid being flatout KO’d by opposing physical threats when equipped with skills like Fury.

Compared with the three star Tharja

Compared with the three star Lilina

Compared with the five star Hubert

Ewan enjoys the benefits of having an exceedingly bloated BST for a mage, resulting in him having an edge over his competition simply by merit of having more stats to allocate. This has seemingly worked well in his favor as evidenced by his ability to excel at both offensive play and magical tanking, while still having enough physical bulk to safely take a single hit from physical damage dealers. Ewan’s Attack is likely his statline’s most notable feature due to its markedly high base value of 37 and access to a four-point +ATK IV; this grants him the flexibility of being able to shine with a Vantage sweeper setup on top of standard Player Phase sets. However, while his excellent statline and greater BST does help differentiate him from his competitors, his lack of an exclusive weapon makes it difficult to recommend him over another red mage like Tharja if one has already invested in them.

Gerik’s offensive statline of 37/36  is quite good and stands out as one of the best in his class, being comparable to the likes of other prominent axe wielders such as Hilda and Raven (though he does lack access to an exclusive weapon of his own). Furthermore, despite his statline’s clear inclination towards maintaining high levels of firepower, Gerik’s overall bulk isn’t particularly lacking either. This means that he will generally have no problem taking hits during combat, making him fairly flexible in the way that he can be built and utilized — especially when factoring his Speed into the equation.

Compared with the three star Raven

Compared with the free Linus

Leader of the Pack

Gerik debuts in Fire Emblem Heroes as a powerful infantry axe wielder with one of the strongest offensive statlines amongst his class on top of solid overall bulk; this makes him a highly versatile unit who can perform a variety of different roles quite effectively depending on what is needed of him. Although he does lack access to a PRF weapon to further develop his astounding combat potential, his statline is sufficient enough to warrant his usage as he can perform well even when equipped with generic weaponry. For example, aside from what his base kit alone may suggest, Gerik can shine as a defensive generalist to capitalize on his sheer versatility and use him as a “supertank” in Aether Raids Offense.

The latest incarnation of the Restoration Lord sees him return with a vengeance, boasting a powerful statline heavily inclined towards both dealing and taking damage. Ephraim’s most notable feature in this regard is his massive base Attack stat of 39, which can be bolstered even further via his four-point Attack Asset; this allows him to inflict substantial amounts of damage on opposing foes quite easily, even without taking his accompanying skillset into account. His physical bulk remains standout amongst his peers and allows him to charge into combat against opposing physical threats without worry of incurring significant health loss, and his base Speed stat offers some defensive value in denying enemy follow-up attacks. Ephraim’s weakest area here is definitely his middling Resistance, but even this can be mitigated to a great extent if so desired thanks to his four-point Asset in this stat.

Compared with the three star Lukas

Compared with the three star Donnel

Ephraim’s exclusive weapon, Reginleif, is a simple, but potent weapon that ensures his follow-up when his Attack exceeds that of his opponents OR when affected by any type of buff that temporarily increases movement (such as the one granted by Legendary Azura’s Gray Waves. Reginleif also deals effective damage against armored and cavalry foes.

Our Bonds Give Me Strength!

Ephraim’s status as a Duo Hero naturally grants him access to a Duo Skill of his own, which he can activate once per battle (or potentially more if using the Duo’s Indulgence structure in Aether Raids Offense). Upon activation, Ephraim will grant himself as well as any infantry and armored allies within two spaces +1 movement for the duration of the turn.

Packed and Ready to Go

As if this weren’t enough, Ephraim’s base kit is extremely solid and includes everything but a functional Assist skill, with the majority of his kit consisting of reasonably valuable skills. This makes him incredibly cheap to build as a minimal amount of investment is needed to maximize his overall performance -- and for those interested in bolstering the potential of other units instead, Ephraim is a great source of Skill Inheritance fodder as well.

Making a surprise appearance alongside his friend Lyon, Ephraim steals the spotlight this banner for a number of reasons. To start off, his statline is fantastic and lends itself perfectly to a “bruiser” archetype, featuring exceptional values in Attack and Defense (as well as access to a four-point +ATK IV) alongside reasonable defensive Speed. While this alone may not be nothing special, it is this statline combined with the power of his exclusive weapon, Reginleif, that offers Ephraim fearsome offensive might, guaranteeing his follow-up attack against opponents with lower Attack or when affected by a movement buff. Armored and cavalry foes are especially susceptible to his onslaught due to his PRF’s effective damage against them. As a Duo Hero, Ephraim even boasts the ability to heighten both his own mobility and that of any infantry or armored allies within two spaces thanks to his own Duo Skill, not to mention his high scoring potential in Colosseum modes. Overall, Ephraim makes for an exceedingly versatile unit whose unique strengths enable him to fulfill a variety of purposes simultaneously.