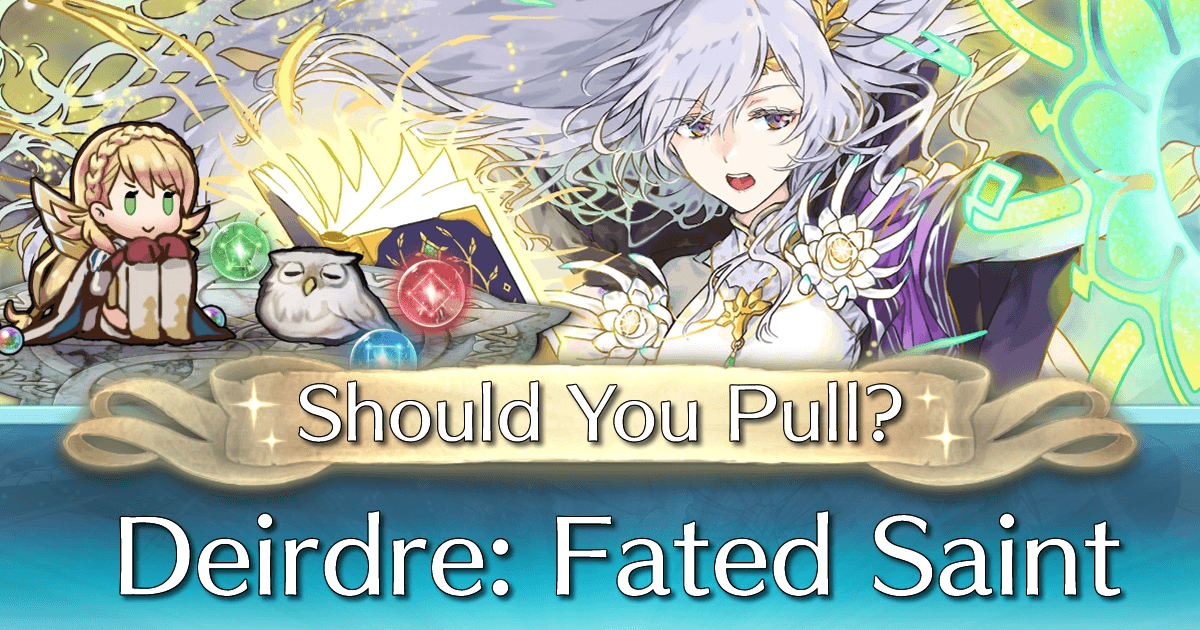 Legendary Deirdre is here, surprising everyone with powerful abilities that are perhaps a bit too similar to her daughter Julia’s. But is she worth your orbs? Read on to find out.

Legendary Deirdre comes with a variety of new effects. Her tome Spirit Forest Writ accelerates her Special, deals extra damage against dragons, debuffs her foe’s Atk and Res, gives her a guaranteed follow-up attack, disables any effect that targets the lower of her Def and Res, and additionally debuffs her foe’s Atk and Res if her own Res exceeds her foe’s. Her Special Circlet of Balance provides extra damage on activation equal to 40% of her Res, as well as an effect similar to Miracle which allows her to survive on 1 HP under specific conditions. These effects combine to allow her to deal high damage, especially to dragons, take magical hits very well including those from dragons, and survive one attack or counterattack under fairly easy conditions.

Fortunately for Deirdre, Earth season has three legendary dragons, Robin, Tiki, and Fae. Deirdre can deal with all of them fairly easily. She can also KO others like Claude and Alm on player phase and Circlet of Flame allows her to survive one hit guaranteed as long as it is fully charged or their Special is fully charged, though she generally still loses to Claude on enemy phase due to his 80% damage reduction from Fallen Star.

Deirdre is a very solid choice in other modes as well, due to her high damage, dragon effectiveness, massive debuffs to her foe based on her Res, and especially her ability to survive a hit with Circlet of Balance. She can easily find a place on Aether Raids defense teams and is also solid in Summoner Duels, as well as plenty of other modes.

The green units available this time are Thorr, Triandra, and Fallen Gustav. Thorr is an axe flier Astra Mythic Hero that unlocks the use of the 6th slot in Astra season. She has great player phase combat with War-God Mjolnir and charges her own and nearby allies’ Specials more quickly with her C skill Worldbreaker. She also has the rare inheritable skill Flow Guard. Triandra is a green tome flying dancer Dark Mythic Hero. She debuffs foes in cardinal directions of her, allowing her teammates to do more damage, and her unique Assist Frightful Dream functions similar to Dance but also applies a stat debuff and the Guard effect on foes in cardinal directions of herself and her target ally. She also has the rare inheritable skills Aerobatics and Spd/Res Rein. Gustav is an axe cavalry with the unique weapon Headsman Glitnir that provides a variety of useful effects in combat on both phases. He also has the rare inheritable skills Atk/Def Catch 4, A/D Near Trace, and Atk Smoke 4.

The colorless units available are Legendary Corrin, Ash, and Fallen Rhea. Corrin is a colorless infantry dragon Wind Legendary Hero. Her unique Special Negating Fang reduces damage taken from an enemy attack by 30% and then boosts Corrin’s next attack by 30% of her own Atk, allowing her to more easily survive a hit and retaliate for massive damage. She also has the rare inheritable skills Distant Counter, Shield Pulse, and Joint Drive Atk. Ash is a colorless infantry beast Light Mythic Hero that unlocks the use of the 6th slot in Light season. She was also available for free by completing Chapter 1 of book VI. Her C skill Opening Retainer allows nearby allies to teleport to spaces around her, and her unique weapon Horn of Opening gives her strong dual phase combat as long as enough allies are nearby. She also has the rare inheritable skills Atk/Def Unity and Lull Atk/Def. Rhea is a colorless armored dragon. Her skills Ruinous Frost and True Dragon Wall allow her to take little damage from most attacks and retaliate with extremely strong hits, making her a strong option to use with skills like Near Save, which she comes with, or Far Save. She also has the rare inheritable skills Bracing Stance 3 and D/R Near Save 3.

Each player will have different wants and needs, so it is impossible to make a recommendation that will suit everyone. However, we can broadly assess the value on each color, keeping in mind that statistically, players who summon on a color should expect to receive roughly the same number of each focus Hero on that color, though individual results may vary wildly from the average.

Red is the weakest choice for most players this time around, with two Normal Heroes that have some decent inheritable skills and one mediocre Legendary in need of a remix. Players merging up Seliph may gain some solid fodder from Galzus or Hugh but in general this is not the best color to spend your orbs on if you want to get great value.

Blue includes three Legendary Heroes, two of which are Earth legendaries, so if you have hundreds of orbs saved up and want to build a high scoring Earth core this could be very high value. However, that depends on getting large amounts of merges on both Deirdre and Fae, which of course is impossible to guarantee due to the inherent randomness of summoning. This color offers high value in general, as all three Heroes are great options for scoring in Arena and have some rare inheritable skills which could be of use to many different players, albeit somewhat focused on skills inheritable only by dragons.

Green is solid but not incredible, with a great Astra mythic in Thorr, a decent Dark mythic in Triandra, and a great axe cavalry in Gustav that also has some fantastic inheritables. Triandra is arguably the weak link here unless players are specifically merging her up, as merges on defense mythics provide considerably less value than offense mythics and Triandra’s inheritable skill selection is rather weak compared to most of the units on this focus. That being said, green is still decent overall for players wishing to merge Thorr or simply obtain some useful units.

Colorless offers a decent Legendary in Corrin, a fantastic Mythic in Ash, and a fantastic save unit in Rhea. This is perhaps the strongest color on this banner, since all three of these Heroes have valuable inheritables as well, with Corrin being perhaps the weakest, but Distant Counter and Joint Drive Atk is still a very useful selection for players building units for Arena scoring. Anyone who wants to build Corrin for Arena and can also use merges on Ash for Light scoring can get great value here.

Of course, there are many other factors worth taking into account when deciding to spend orbs, such as other places you might spend them. The Flame Tribe banner is nearly upon us with fantastic New Heroes like Lyn and Tana, and there will no doubt be other strong options in coming months as well, so only you can decide if it’s worth an orb.