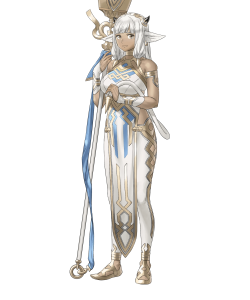 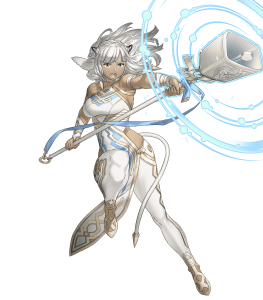 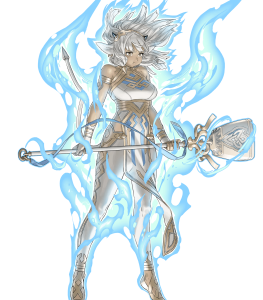 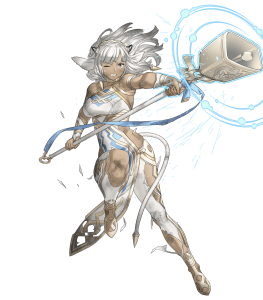 In addition, when she starts her turn adjacent to only beast and dragon allies, or no allies, she can transform and gain additional effects: Atk +2, +7 damage when she triggers a Special like Bonfire, and neutralizing any enemy skills that increase her enemies’ Special charge or decrease her Special charge like Special Fighter.

This combination of effects allows Ash to deal high damage and activate Specials easily against many units.

Ash’s C skill Opening Retainer has the fantastic effect of allowing any allies within 2 spaces to teleport to any spaces within 2 spaces of her, a similar effect to Fruit of Idunn. In addition, it also provides the effect of Joint Drive Atk. This is extremely useful for positioning and mobility on many different types of teams.

Ash is a Light Mythic Hero that provides a stat boost of 5 HP and 3 Atk to any allies with a Light blessing when used in Light season in Aether Raids. In addition, she unlocks the use of the 6th unit slot on Light Raiding Parties, just like Dagr and Ullr.

Ash’s base 39 Atk is high, and allows her to deal good damage and reliably activate effects like Heavy Blade.

Ash’s base 41 Def is great, and her HP and Res are good, allowing her to survive many hits in combat, particularly against foes that target Def.

Ash’s position as a colorless unit outside the weapon triangle gives her neutral matchups against most enemies, apart from those with skills like Gronnraven or Naglfar. Her status as an infantry beast unit allows her to use some good skills like Lull Atk/Def and Galeforce.

Ash’s base 27 Spd is average. While she can get around this to some extent by guaranteeing and blocking follow-up attacks with Horn of Opening, it means she is weaker to enemies using effects like Null Follow-Up and will do less damage to those using skills like Close Call.

While Ash’s status as a Light Mythic Hero makes her very useful in Aether Raids, it also means that she cannot receive extra stats from other mythic heroes, which can make her a worse choice for a combat unit compared to some non-Mythic heroes that can.

While Ash gains access to some useful skills by virtue of being an infantry beast hero, it also restricts her to melee combat and only 2 mov under normal circumstances, making her mobility rather limited compared to many other units. In addition, the inheritable skills available on infantry beast units are rather limited at the time of writing compared to many other movement/weapon combinations. Ash is a great unit on the strength of her unique skills, but her inheritable options are not amazing.