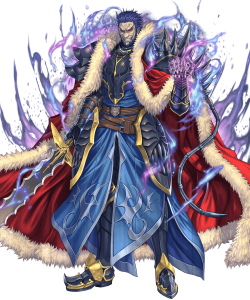 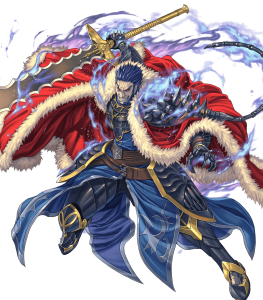 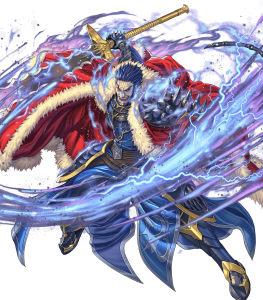 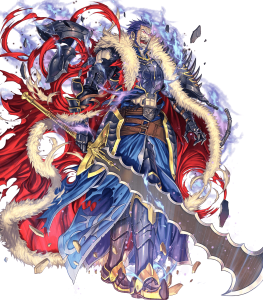 Ashnard's statline is respectable, but his prf is what really makes him excel where a myriad of GHB fliers behind him have failed. With the ability to nullify flier weaknesses, Gugurant allows Ashnard to take a defensive role without needing to clutter his A slot or Seal slot with Iote's Shield. This tremendous increase in build flexibility makes Ashnard stand head and shoulders above many of the 5 star exclusive fliers and solidifies him as one of the best, if not the best flying tank in the game.

Even with the mighty Gurgurant, Ashnard might not have been impressive if his defenses were not up to par - but they are. With both his Defense and Resistance at 35 and 31 respectively, Ashnard can function as a fierce mixed tank, meaning that you don't need to worry if there's a dragon or mage on the battlefield before sending him in.

His Attack is also fantastic at 37, for which he trades a ploddingly-low Speed of 21. This can be offset by skills such as Quick Riposte, particularly if he's being played defensively.

Gurgurant enables Ashnard to function fantastically as a supportive melee tank with a Far Save ally, particularly when coupled with a Rein skill in his C slot. Ashnard can essentially reduce an attacker's Attack and Defense by 9 with Gurgurant + Atk/Def Rein, which goes into effect for any ally who uses Save on him. This allows Ashnard to effectively support from the frontlines with a free pseudo Spendthrift Bow effect for his ranged partner and himself.

Ashnard's low Speed can make his defensive stats somewhat less relevant: since he will almost always be doubled, he'll be taking double damage from most sources. Thanks to the Attack debuff on Gurgurant and his high defenses, he's likely to survive if built correctly, but his utility as a tank may decline after the first combat if he takes enough damage from his foes.

Ashnard doesn't need Iote's Shield cluttering up his prf slot, but he does require Quick Riposte in his seal or B slot, which limits his builds and makes him vulnerable to enemies with Null Follow-Up.

Mystic boost 3 or lull atk/def 3 on B; for some reason atk/def rein is not listed; Bonfire or Ignis as special.
Ashnard will likely be doubled by an enemy attack, so deal with it and try to avoid a special that can truly hurt him, so the bracing stance for the A slot will make a good chunk of units stop at this flying wall.
On the Seal, a def/res solo or bond depending on the team positioning needs.
Mystic boost will allow him to keep fighting longer due to the intended use of OHKO on player phase or if contantly facing enemies that can't pass his defenses or that can barely cause 6 damage. Lull atk/def 3 is another good choice, since it will cut enemies' bonus and will increase the total debuff that Ashnard will cause to -12/-12, incresing even more his "wallness" and base atk damage.
Since this playstyle is focused on defense, Ashnard should only initiate combat if it is a certain kill or if it will not compromise his defenses or allow the enemy to have a special ready to retaliate. Most ranged will be OHKO anyway, due to their low defenses and Ashnard will likely survive the atk of most ranged units that can't activate their special. Bonfire is a better choice IMO if you can position him in a way that just a single enemy can hit per turn, so on your turn you will likely retaliate using it and OHKO most units in the game. IMO Ignis is better if you want all enemies to come at once to Ashnard.

*Change Guard to Guard Bearing and Atk/Res Rein to Atk/Def Rein because the unit builder hasn't updated yet.

HAHAAHAHAHAHAHAHAHAHAHAAHA
^Probably a common occurrence when you're running this memey yet viable build. Assnard will be taking so little damage that 0 will be the only number you see in enemy phase. Even blue mages will have a hard time with him due to guard bearing AND -9 atk to the enemy.

Weapon: Gurgurant
Removes flying effectiveness AND -5 atk/def? Bruh, if it wasn't for his speed, I'd be running him in my main team.

Support: Positionals
Tbh, I'd recommend pivot to get in front of your team. Gurgurant + Rein will still activate in that range so it'll help range attackers from hitting anyone you pivoted in front of. Ofc, the "+" support skills are ok too for the scoring.

Special: Noontime
2 cooldown, moonbow wouldn't work that well since you're already inflicting -9 def from this build. Aether could work I guess but like 5 cd is a bit too much. Glimmer could work for some bonus dank points.

A: Distant counter
If you want a tankier build, go for fort def/res or a bond 4 skill. DC is purely to give Daddy Nard some offensive capabilities.

B: Guard Bearing
50% dmg reduction on first combat. Remember that, only the first combat. He's still pretty tanky without this but where's the fun in that?

C: Atk/Def Rein
Alrighty, I've been waiting for Atk/Def rein to be added since brave claude. Gurgurant + Atk/Def Rein is the bread and butter of this build. -9 Atk/Def on the enemy at all times is just a funny number to look at.

S: Quick Riposte
He ain't speedy so a guaranteed follow-up is great on him. Again, fort def/res or a bond skill is still good if you want a tanky ass.

There're a few weaknesses and guard bearing probably isn't the best thing to put on him but again, this is a memey build for a super tank assman. Have fun!

A highly defensive Flier who doesn't need to rely on Iote's Shield to be a tank? I'll take your entire stock. (Or at least 11 of them.)

Ashnard is brutal on enemy phase, with high defences, high attack, and guaranteed follow ups as long as his health stays above the QR3 threshold. Mirror Stance 2 boosts his Res to be nearly on par with his Def, and pushes his Atk up to painful heights even if you haven't given him an Atk boon. With a Fortify Fliers buff and/or a Ward Fliers or two, he's a monster to try to take down. Bows? Never heard of them.

Bonfire could be swapped out for Noontime or Sol to supplement his health for longer engagements to keep QR3 active, and if you're not throwing him against mages or dragons very often, you can boost his Def further with Sturdy Stance or Atk/Def Solo instead of Mirror Stance as a Sacred Seal.

Disclaimer: This build is supposed to have Atk/Spd Rein 3, but it wasn’t available in the build maker.

Ashnard is a fairly popular pick in flier ball Aether Raids Defense, but his abysmal speed stat holds him back; as a result, Ashnard struggles with damage reduction skills such as Spurn. With the right support, you can buff Ashnard’s speed stat way past 50, boosting his already stellar survivability to ridiculous levels. If AR Spd/Res is undesirable, Spd/Res Form is a great alternative. Noontime offers him great sustain, but you might be inclined to use a damage boosting special, such as Bonfire.
Likewise, his B slot is also interchangeable.

With skills like Guard Bearing, Flier Formation and Obstruct, there are a plethora of options to consider when optimizing Ashnard in your flier ball defense team. The real game changer in this build is the newly added Atk Spd Rein skill, compounding his weapon’s Atk debuffs to a disturbing -9 Atk / -5 Def / -4 Spd. All things considered, the build is very expensive, but those who want to try a more generalist approach with Ashnard may find greater flexibility with a remedied speed stat and greater debuffs for him and his team.