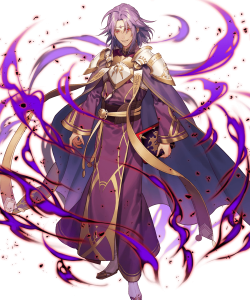 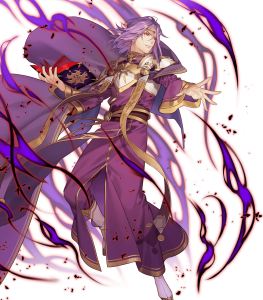 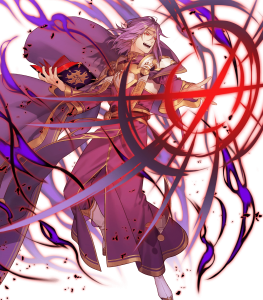 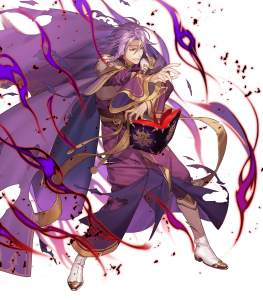 Do you think your blade can hurt me? (Defensive Tank)

Strong enough to defeat even you (Offensive Oneshotter)

Lyon's Blood Tome is an incredibly powerful defensive weapon, which reduces all ranged damage he receives by 50%. This is similar to Urvan's refined effect in that it is a flat damage cut which makes Lyon exceptionally tanky against all ranged enemies. Unlike Brave Ike, Lyon also has the Resistance to back it up, allowing him to take powerful hits from even red mage foes without breaking a sweat. Lyon also takes less damage from foes with Hardy Bearing, as his damage cut is 50% while Brave Ike's 'first hit' damage cut is only 40%.

Additionally, Lyon's tome grants him the same 80% Resistance to AoE Specials as Nagi's Ethereal Breath, making it easier for him to tank units like Ophelia and Sonya with pre-charged specials in Aether Raids.

Lyon's stats could not be any more minmaxed. With a pitiful Speed stat of 16 and meager HP of 40, he puts all of his stats into Attack, Defense, and Resistance. His neutral Attack is a whopping 40, which guarantees that he will hit hard, while his Defense and Resistance are 32 and 35 respectively, making him a fantastic counter to all ranged threats and even granting him the ability to tank a few melee threats.

Because his Defense is only a few points lower than his Resistance, he doesn't fear counterattacks from dragons as much as other units with mismatched defensive stats.

Lyon's tome only grants him damage cut against ranged foes, making him extremely vulnerable to melee targets. His high mixed bulk can grant him some reprieve, but when the vast majority of the heroes in this game can double him, his bulk only goes so far.

Additionally, his tome does not grant him weapon triangle advantage against melee colorless units, such as colorless beasts and dragons.

Lyon's Speed stat suffers from his minmaxing of his other stats. While he makes up for it in his ranged defense, it also means that he will basically never double an opponent without a skill like Quick Riposte and must instead rely on oneshots. This also means that Lyon is likely to get doubled by nearly everyone who initiates on him, which makes his defensive stats somewhat less impressive.

One positive thing about his low Speed however, is that Lyon will never need to concern himself in keeping up with Speed creep.

Thrasir B Gon (patent pending) is a build that's specialized for Astra season AR. Thrasir is a common threat, and is often found paired with B!Veronica for additional headaches. So, what better of a solution is there than a unit built to fight ranged units that also comes pre-packaged with NCD?

Mirror Stance helps pump F!Lyon's attack power to ensure a one-shot on Thrasir, who will attack twice and charge up F!Lyon's Glimmer while also being denied a special proc. This unfortunately leaves F!Lyon without a healing special, so Renewal is run to provide a source of self-healing. Noontime can also be run with Fierce Stance, but it will need outside support to ensure a kill on a highly merged Thrasir. NCD is kept on this build to expand F!Lyon's utility to fighting any firesweep units, and Atk Smoke helps make sure F!Lyon isn't overwhelmed before he can heal with Renewal.

The Demon King is a beast. Most red mages can't take him out and I just love seeing the archers and staffs fail miserably in AR when Lyon TKO's them after they try and block his counter.

I love him. Until Felix is added, this is my boi.