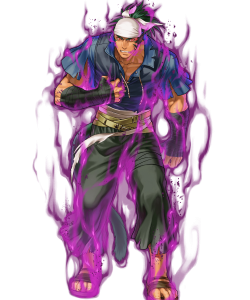 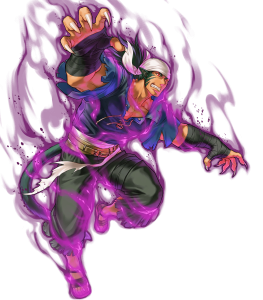 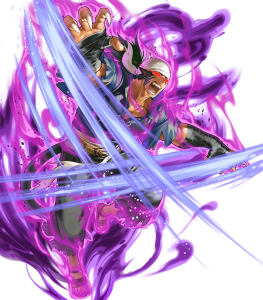 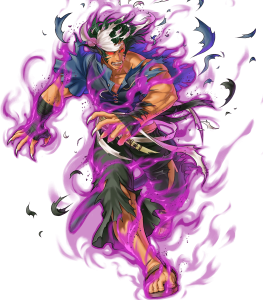 In The Shadowed Forest, I Sought A Lost Child (Mixed Phase Speedster)

Passive B: Wings of Mercy / Null Follow-Up / Hit and Run

Within Thy Heartless Mind, Thy Heart Soars (Self-Damage Nuke)

Par the course of Fallen Grand Heroes and modern beast units in general, Muarim is gifted with a unique PRF with a load of potent and interesting effects. In a comprehensible list, Wild Tiger Fang grants:

Notably unlike other beasts, Muarim's transformation requirements are not tied to positioning or parking near specific allies. Rather, as long as the Turn count is not 1 or 3, he will always transform without fail. Additionally, Wild Tiger Fang also has a unique recoil effect, which can be beneficial for skills requiring a low-enough HP, including Wrath and other allies' Wings of Mercy.

As mentioned, Wild Tiger Fang differentiates Muarum from the rest of the beast pack by tying his transformation conditions to the current turn count rather than being positioned away or near certain allies. Under normal circumstances, you would need to go out of your way to optimize a beast unit's combat by either pairing them specifically with other beast or dragon allies whenever possible. Alternatively, you'd need to take positioning pains to separate them from human units on the map.

In Muarim's case, as long as the turn count isn't 1 or 3, transformation effects are essentially otherwise permanent on him. Thus, this relieves the worry of deciding which teammates to pair him with or where he parks on the map. In many cases, the temporary turn inconsistency is a fair trade-off, as Turn 1 is typically used to approach and set up. At the end of the day, in pressing situations, Muarim can also mostly do without the transformation conditions on these specific turns, as his base weapon effects are mostly great on their own.

As with all newer infantry units, Muarim takes advantage of his high base stat total with the efficient distribution. His obvious standouts are his 43 Atk (basically becoming 48 after the flat +3 and +2 Atk boosts from Wild Tiger Fang) and 40 Spd (44 with a super Asset), securing a great amount of damage dealt and follow-ups across the board.

Muarim's defensive prowess comes out rather satisfactorily after this, with a very respectable 45 HP backed by 31 Def and 23 Res. After the various stat, damage, and Special supplements from Wild Tiger Fang and other skill passives, we're looking at an absolute freebie unit.

With Muarim's access to a PRF weapon, the base 185 BST bin, and relative flexibility with human teammates, he becomes a very solid choice as a max merge, high-scoring project for modes with Colisseum scoring. Additional merges are perfectly achievable without lifting a single Orb as Muarim is a free Grand Hero unit.

Additionally, as Wild Tiger Fang already provides a number of effects shared by several particular high-grade luxury skills nowadays, his inheritance choices are rather simple and narrowed down. You pretty much never have to worry about inheriting the following due to redundancy:

Beast units not being at their best untransformed is definitely nothing new in Fire Emblem Heroes. In Muarim's case, though, he takes cues from a certain young Telliusian lad (no, unfortunately, not THAT one...yet) with a weapon that actively guarantees he's locked from several possibly game-changing effects on Turn 1 and 3. This can either be no big deal at all or a huge one, depending on the map, modes, and utilities in question.

At the end of the day, all this also assumes that gaining transformation perks is important at those two specific times anyway. This may very well not be the case occasionally with how useful Wild Tiger Fang's base effects are.

With only pretty serviceable 45/31/23 defensive stats (approximately on par with unrefined Nailah) and Wild Tiger Fang's innate recoil effect, Maurim finds himself going down somewhat easily in extended fights or against very powerful hits. He does have a few ways of counteracting this, like specifically running healing Specials or running Spd Smoke 4 to gain damage reduction, but those, too, have their performative limits.

At the start of a turn, Muarim will always apply a -6 spectrum stat penalty to foes within a four-space radius of him. While this aids in swinging the combat in Muarim and his allies' favor, there are several skills and units that take these debuffs completely in stride. For instance, Ascended Idunn and Brave Hector can completely neutralize penalties affecting them under easy conditions, and those with Unity effects in the A-slot or a weapon can gain a massive stat advantage through penalty reversion.

Two of Muarim's key effects — Atk/Spd +6 plus enemy bonus negation — activate upon entering combat against a healthy enemy with at least 75% HP. Given that every unit starts at full health at the start of the match, this is typically no big deal at all. Keep in mind, though, that unfinished business in the form of sufficiently damaged or barely-living enemies may bite back nastily as they have the chance to retaliate against a less empowered Muarim.