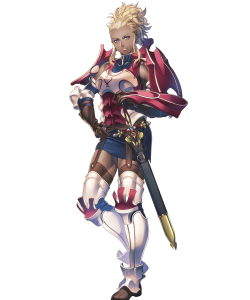 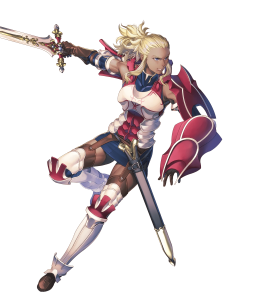 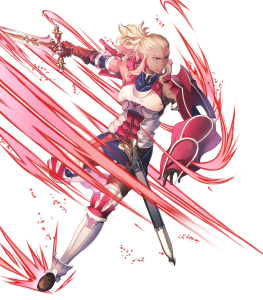 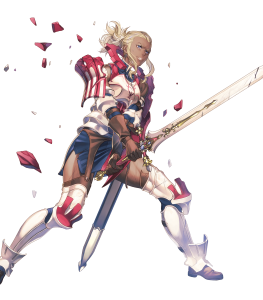 Flavia’s unique weapon, Lioness Blade, has a variety of powerful effects: it accelerates Special trigger, reducing cooldown by 1. If her HP is above 25% at the start of combat, it grants Atk and Spd +6, and allows her to ignore non-Special skills that reduce damage by a percentage when she activates her own Special (so it ignores things like Close Call and Caduceus Staff, but doesn’t ignore Ice Mirror or Negating Fang). Additionally, if her foe’s HP is also above 75%, she gets +1 Special cooldown on all attacks during combat.

Flavia’s base 40 Atk and 41 Spd are excellent and allow her to deal high damage, gain follow-up attacks easily, and utilize damage reduction from skills like Spurn.

Flavia’s base 36 Def is good and her base 41 HP is decent, allowing her to take many physical hits.

Flavia’s status as a sword-wielding infantry unit allows her to use great skills like Spurn, Null Follow-Up, and Time’s Pulse.

Flavia’s base 23 Res is low, meaning she is easily KOd by magical attacks. Damage Reduction from a skill like Close Call can mitigate this somewhat, but only by 40%.

Flavia’s status as a melee infantry means she can only attack adjacent foes and can only move 2 spaces under normal circumstances, limiting her ability to engage on foes easily.

There are many other powerful sword infantry that have great effects that Flavia doesn’t, such as Legendary Marth, Brave Alm, and Winter Altina. While Flavia’s ability to ignore damage reduction is essentially unique to her among sword infantry, and the Special charge gain is also powerful, other than that there are many units with similar abilities.