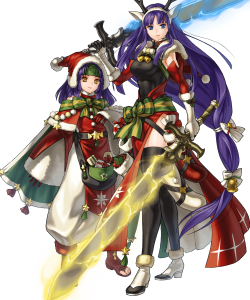 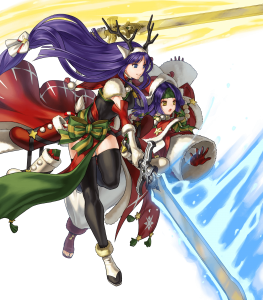 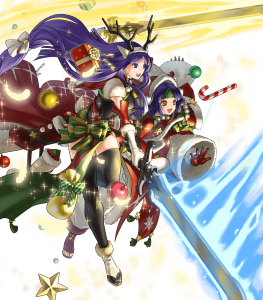 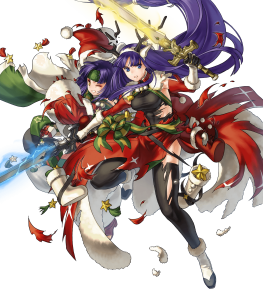 Too Much Christmas Cookies, Sanaki! (Damage Focus / Base Skills)

Altina's original signature weapon strikes twice merrier than ever, sporting its potent double hits in player and enemy phase while having the ever-valued Distant Counter effect baked in by default. The dual Brave effect not only makes Altina/Sanaki excel at doing blitz damage at most given moments, but it also charges their chosen Special more quickly than other units with single-hit weapons.

That piggyback ride Altina's giving probably confirms that Sanaki weighs a ton, but 1) Altina's buff enough to handle it (just look at those abs!) 2) The transition from flier to infantry unit gives Altina access to lots of great limited skills she couldn't use before. Lull Atk/Def, Time's Pulse, Special Spiral, their own native Null C-Disrupt, and being able to collect Infantry Pulse from allies are very notable gains in particular.

Altina/Sanaki's new infantry status also gifts them a higher base stat total of 176—which also happens to be Arena scoring viable compared to other Harmonic heroes. Fortunately, they distribute the resulting stats with gleaming optimization. Their most important standout stat is Attack, which pops at a huge base 40 and becomes even more outlandish from a super Asset (4 additional Attack instead of 3). Except for Speed—which Altina/Sanaki was never going to invest in seriously anyway—the rest of Altina's defensive stats eat well with values well over 37, giving her considerable durability throughout all builds.

Sometimes old tricks still work, and Altina doesn't stray far from her original playstyle by having Vantage essentially baked into a pressable button. With this, Altina/Sanaki's B slot can be freed up for other competitive B slot options, especially their native Null C-Disrupt or Lull Atk/Def. Additionally, the extra +4 Attack and Speed coming from Resonance: Blades effect aids both Altina/Sanaki and units from their respective titles (Path of Radiance and Radiant Dawn) for an extra push in killing power.

The Harmonic Effect Only Works Once

The Christmas party music stops once players consider that Altina/Sanaki's Harmonized Skill only work once. This results in a few deliberations:

Altina/Sanaki has Null-C Disrupt by default which typically solves the problem of facing units with counterattack cancellation effects such as Firesweep or Dazzling staff. Should they lack that on her current build, however, those can get in the way badly. The duo is also still not insured again Hardy Bearing weapons / effects, which grants the risk of picking off Altina/Sanaki if they are at low health.

Like Nemesis and other slow tanks before them, Altina/Sanaki's dastardly low Speed puts limitations on their tanking abilities as follow-up attacks become commonplace against them. While their defensive stats are great, they're not that fantastic to the point of taking multiple enemies head-on without activating the Vantage effect or running sustain Specials. These issues become only pronounced when the enemy has a chance to double.

For general reliability, players may flock to Speed tanks such as Mareeta or Kris, who have little problems avoiding follow-up attacks AND making them on their own while being able to weather multiple attacks thanks to damage reduction B slot skills. The closest low-rarity unit to Altina/Sanaki, Laslow, is also significantly more accessible and mergeable with a similar Brave effect, and can run very similar builds while typically troubled less by Speed issues.

Grants【Resonance: Blades】to unit and allies from the same titles as unit.  Grants【Vantage】to unit.  【Resonance: Blades】 Grants Atk/Spd+4 during combat for 1 turn.  【Vantage】 If foe initiates combat, unit can counterattack before foe's first attack for one turn.

Funny Heroes' Journey thread
Like always Show your funny screenshots of this event I ended using the Gods I…
How Fast is Too Fast?
So originally this was gonna be a thread about Legault builds, then it was just gonna…
Book V Ending
https://www.youtube.com/embed/wPNOLtPgaJY All for right now 63 posts - 27…
Your thoughts on old Cav units in Arena?
I’ve got “B” and “R” Dual Cav. fodder sitting in my barracks and I’ve been…
What FE game should I play/replay next? Redux [Poll]
So a while ago I asked what game I should play next, and you all overwhelmingly…
Read More