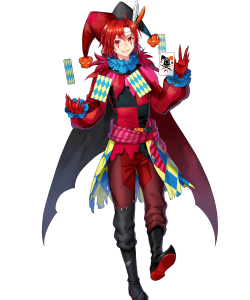 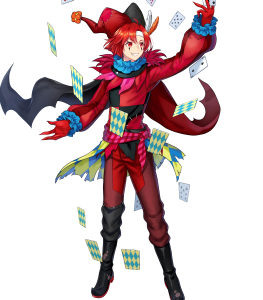 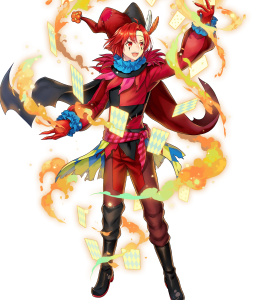 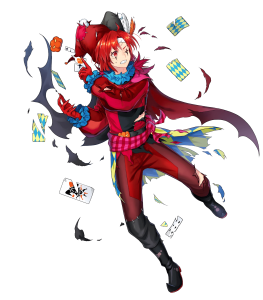 Xane’s personal weapon, Joker’s Wild, copies the highest stat of his allies that are within 2 spaces. With the modern tendencies of stat totals heavily favours sacrificing HP for other stats, and melee units tend to have a higher stat total than ranged, Xane can effectively be a giant ball of stats while maintaining the status of being a ranged unit. This can be further augmented by his allies using skills that boost visible stats, which includes weapons such as Yato and Candlewax Bow, and skills such as Fury.

Like staff units, Xane enjoys great neutral coverage against the majority of enemies while hitting for magic damage; the only direct answer to him, Raven tomes, are relatively rare. Unlike staff users, however, colorless tomes are not burdened by extremely restrictive weapon and inheritance limitations. Essentially, Xane trades color-based advantages with unparalleled consistency.

Partially a consequence of Joker’s Wild, the only stat Xane will carry over is his HP stat. This meant that he performs almost as well as a low merged unit.

Joker’s Wild heavily relies on him within 2 spaces of his allies. This could be rather cumbersome when utilized in the player phase, as he will need his ally of choice to meet his weapon condition. Players will also need to watch out for displacement skills, such as Drag Back and Lunge, as those could lead to Joker’s Wild losing his effect.

Susceptibility to Panic and Debuffs

As Joker’s Wild hinges on the visible stats of his allies, any debuffs that happened on allies will also be absorbed by Xane. This includes the penalties of Panic if all the allies within 2 spaces are affected. Furthermore, maximising visible stats also meant being more likely to be the target of Chill skills, and the shrines in Aether Raids. The combination of these factors meant that Xane’s borrowed stats might not be as high as expected.

While the lack of commitment required is a benefit, it also meant that there is not much to gain from merging Xane up. Should a player go for a fully invested Xane on merges, the difference in performance is likely to be marginal.