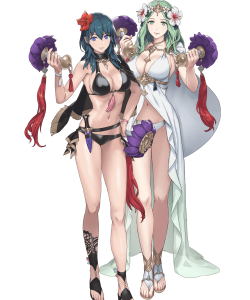 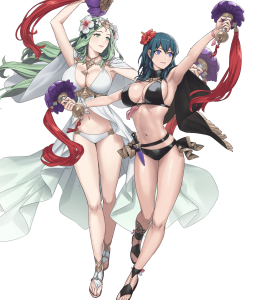 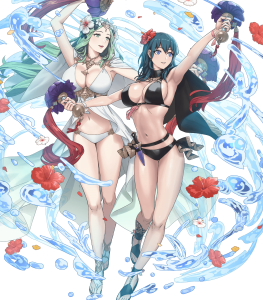 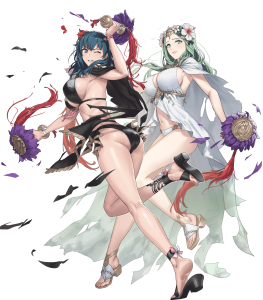 Our local summer Vatican Duo's main differentiating factor is Sun's Percussors, which sets them quite apart from similar competition due to a mixture of three effects: reduced cooldown, a large extra helping of Atk/Spd, and, most outstandingly of all, Null Follow-Up. The last part in particular makes Byleth/Rhea a very ponderable threat, as it gives them lots of flexibility in terms of units they can attack on as well as accompanying B slot combinations—Windsweep especially comes to mind.

As yet another entry in the ongoing list of Duo heroes, Byleth and Rhea benefits from typical Coliseum scoring advantages (scoring innately with a hidden BST of 185) and, more importantly, a pretty tame but nevertheless potent Duo effect: Desperation that works at any HP level. In addition to opening up B slot options for Byleth/Rhea themselves as well as affected allies in the skill's range, it also self-refreshes every third turn, allowing for flexible usage despite player mistakes.

Additionally, despite lending themselves more towards PVE, Arena, and general gameplay, the duo's capabilities make them well-suited for Aether Raids Defense, where they can offer Ground Orders support as well as activate Duo's Hinderance.

The benefits of being a flier and ranged at the same time is often very understated. The first part gives Byleth/Rhea great movement options (especially in tree/lake/chasm-heavy maps), and using a tome only accentuates this as they also benefit from better attacking range compared to melee.

The duo isn't asking for much more in the offensive department due to a great starting statline of 36 Atk and 42 Speed—which are notably leagues better than those of previous red tome fliers. Additionally, their Speed benefits significantly more from its superasset if taken, and these are further enhanced by Sun Percussor's conditional in-combat boosts.

Byleth/Rhea's larger assets unfortunately don't include their defenses, which pretty much suffer greatly for their neat offensive stats. Opponents that can somehow get withstand the duo's Desperation or Windsweep effects can typically deal damage badly or outright defeat them when left wide-open.

Fliers are often made fun of for their lack of exquisite inheritance options, and Byleth/Rhea feels this quite a bit as they cannot access otherwise very fitting skills such as Lull Spd/Res or Special Spiral. In fairness, Sun's Percussors provides a conditional form of Null Follow-Up—a very potent skill normally native to infantry.

Grants【Desperation】to unit and allies within 2 spaces. At start of every third turn, if Duo Skill has already been used, unit can use Duo Skill again. 【Desperation】 Grants the following effect for 1 turn: "If unit initiates combat, unit can make a follow-up attack before foe can counterattack."