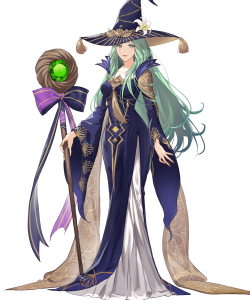 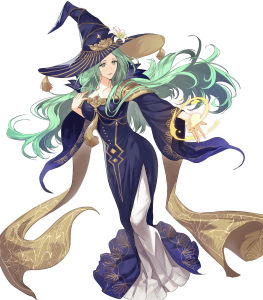 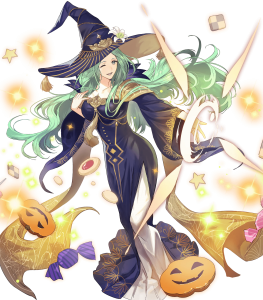 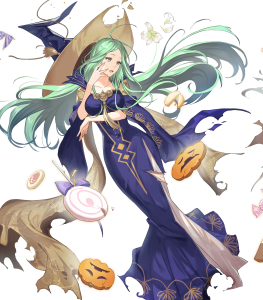 I Am the [REDACTED] Supreme (All-Purpose Tank / Defensive)

Featuring properties spookily similar to that of a certain saint’s weapon… Witch Breath provides Halloween Rhea with steady control of each battle; having access to automatic doubles and enemy follow-up denial simultaneously is seriously powerful as it helps her bypass the typical limitations of her low Speed without wasting a single one of her other skill slots. Alongside its complementary in-combat buff and debuff to her Attack and that of her foes, Witch Breath ensures that Halloween Rhea can hit hard, tank effectively, and do both effortlessly in both Phases by maintaining relatively simple activation requirements.

Definitely not a complicated weapon by any means, but a notably potent one nonetheless.

Halloween Rhea’s overall stat distribution was clearly meant to make the most of Witch Breath, and boy does she do it well thanks to her staggering 182 BST.  In exchange for sacrificing any semblance of a Speed stat (which is, again, remedied entirely by her weapon), Rhea sports some of the best defensive values in the game with a 39 Defense, 42 Resistance, and access to four-point Assets in both; this grants fantastic durability at base and becomes highlighted further upon consideration of her passive Attack debuff and damage reduction access. 42 base Attack also means that Rhea can output consistent damage without difficulty.

As a bit of a side note, such strong values mean that Halloween Rhea is somewhat forgiving should Witch’s Breath automatic doubles and/or follow-up prevention be bypassed by Null Follow-Up or other means — she won’t necessarily be able to deal or endure damage as effectively as she normally would, but at least she won’t be entirely dead in the water.

The head witch is able to maximize the versatility and power of her appropriately named PRF by merit of the exceptional skill accessibility imparted by her infantry dragon status; with access to powerful Assets like Null Follow Up, Null C-Disrupt, and Dragon Wall, she can extend the applications of her weapon in ways she otherwise couldn’t.

seriously just look at her, everything else she can do is a bonus

While Witch Breath makes it so that Halloween Rhea normally doesn’t have to worry about her Speed, the issue with her Speed this low is that it means all she can rely on to both perform and avoid follow-ups is her weapon, so any enemies who can neutralize these effects will undoubtedly prove quite troublesome. Her well-optimized statline does protect her from being outright killed in such cases, but she still won’t be able to operate as nearly as potently as usual — especially if engaging with such a foe leaves her below 50% HP.

Dragon-effective damage may not be as annoyingly ubiquitous as it once was, but it’s still common enough that it’s a threat worth considering when including Rhea into a team and one that should be actively avoided; she’s bulky, sure, but effective damage can still leave a heavy dent in her health and she needs to stay above the aforementioned threshold to maintain her follow-up denial effect.